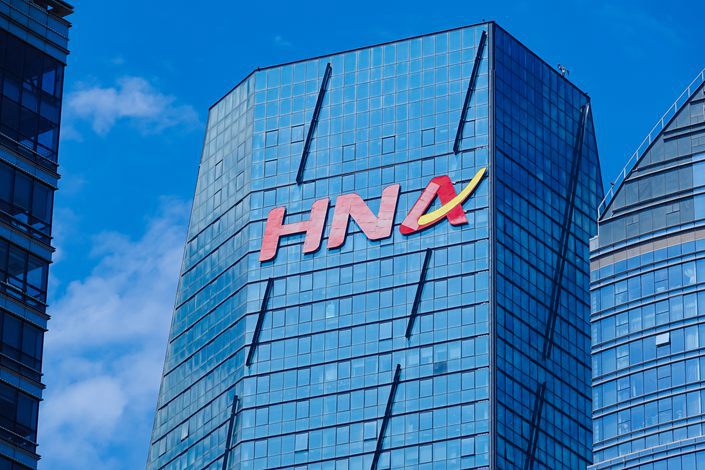 The yuan-denominated A-shares of HNA Tech, which trade on the Shanghai Stock Exchange, jumped 10% to 2.92 yuan shortly after the open and remained there until the end of the trading day. The company’s U.S.-dollar denominated B-shares, which trade freely among foreign investors, also rose 10% to close at 26.5 U.S. cents.

In February, however, a bankruptcy petition filed by creditors of HNA Group Co. Ltd., the ultimate parent of HNA Tech, was accepted by the Hainan Province High People’s Court. The court ruled in mid-March that it would pursue the restructuring procedures by consolidating HNA Group with 320 of its affiliates.

HNA Group was once among China’s most acquisitive conglomerates, buying up assets such as the Radisson hotel chain, aviation services company Swissport Group and stakes in Deutsche Bank AG and airlines and airports, in addition to Ingram Micro, in countries as far flung as Brazil, Australia, Ghana, Turkey and South Africa.

HNA Tech is not on the court-led bankruptcy reorganization list, but its controlling shareholder, HNA Technology Group Co. Ltd. and a few of its affiliates are, and there are 5.58 billion yuan ($876.1 million) in loan guarantees made to those group companies. Various lawsuits have been filed against HNA Tech by banks and other financial institutions.

The announcement over the weekend served as affirmation of the deal that had been agreed to before the restructuring. The deal’s price tag is now $7.4 billion, as Ingram Micro’s valuation has climbed since December.

One retail investor in an online forum on the Chinese mainland wrote Monday: “Debt-burdened HNA Tech can finally shrug off its heavy debt load, collect the cash and move forward in a lighter body.”

Some retail investors are cheering the fact that Guohua Life Insurance Co. Ltd., which holds a 14.3% stake in HNA Tech as well as a board seat, is opposed to the transaction, apparently holding out for a better deal. Even though the board recently passed a set of 16 resolutions to push forward with the existing deal, Zhu Yingfeng, vice president of the insurer who doubles as a director on HNA Tech’s board, voted against all proposals on the table.

According to a statement on Monday, Zhu said Ingram Micro is a “rare and commendable high-quality asset,” as its financial performance in recent years has indicated. Its net sales in the first 13 weeks of this year stood at $13.44 billion, up 23% compared with the same period a year earlier, while its net income jumped 89% to $172.75 million.

“Given the new circumstances, in which Ingram Micro’s performance is entering a new and positive phase, the company will have to seriously consider that and try various other channels and strategies to seek a buyer that can provide a better offer price in order to further enhance the company’s profitability,” Zhu said in the statement.

HNA Tech spent $5.98 billion to buy 100% of Ingram Micro in December 2016. Most of the funding came from bank loans, but Guohua Life provided 4 billion yuan ($627.8 million) to help complete the deal.

HNA Tech’s shareholders are set to vote on whether to move forward with the current deal on June 16. Ingram Micro said earlier this month that the acquisition by Platinum Equity LLC was expected to close at the end of June.

Before the vote by HNA Tech’s shareholders, HNA Group’s creditors are scheduled to gather Friday for their first official creditors meeting. It is unclear whether Guohua Life will take any action at that time. Tianmao Group, the Shenzhen-listed parent of the insurer, did not immediately respond to queries from Nikkei Asia.

Ingram Micro and Platinum Equity also did not immediately respond to separate requests for comment.