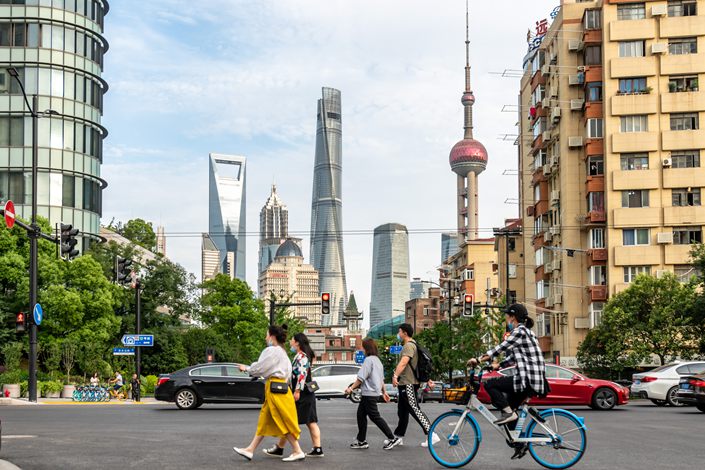 Residents travel down a street in Shanghai on Monday. Photo: VCG

At the 2000 Shanghai Biennale held in the Shanghai Art Museum, a sculpture by internationally renowned Chinese artist Huang Yongping captured a great deal of public attention. Huang had crafted a sandcastle replica of a famous building located along the Shanghai Bund that was once owned by the Hong Kong and Shanghai Banking Corporation (HSBC). This award-winning artwork was satirically entitled Bank of Sand, Sand of Bank. The most poignant feature of the piece was its transformation over the course of the exhibition, slowly drying and disintegrating.

The collapse of this replica landmark building was highly symbolic, particularly in its allusion to both the impressive impact and the potentially catastrophic effects of globalization. Many imperialist powers, including the United States, all had substantial ties to this international bank throughout their engagement with the Middle Kingdom during the first half of the twentieth century. Since the late 1990s, the building has housed another bank — the Pudong Development Bank — a principal financial backer of the earthshaking construction in the eastern part of Shanghai across the Huangpu River, particularly in the Lujiazui district, which many consider to be China’s Manhattan.

The impacts of pivotal events in recent history — whether it be the 9/11 terrorist attacks in the United States, the 2008 global financial crisis, or most significantly, the Covid-19 global pandemic — have collectively reaffirmed Huang’s sentiment and fear of the cataclysmic shocks and aftereffects that stem from an increasingly interconnected world. The Covid-19 crisis caused sudden interruptions and stoppages to daily life and business routines across the entire world. In Spring 2020, for example, 3.4 billion people in 78 countries (about 43% of the world population) were under government orders requiring that they “shelter-at-home.” At the same time, the pandemic had forced 191 countries to close schools, preventing more than 1.5 billion students worldwide from studying in normal classroom environments. Billions lived under quarantine in a state of isolation, anxiety, or even panic. By May 2021, about 170 million people had been infected and more than 3.5 million had died.

The long-term implications of this “pandemic of the century” are far from clear. Prior to the outbreak, economic disparities within and between countries had already given rise to anti-globalization movements across the world. The epidemic has understandably cast further doubt on the prospects of globalization. In addition to being a devastating public health crisis, Covid-19 has also revealed fundamental problems in domestic governance and international order. As Henry Kissinger asserted, “Many countries’ institutions will be perceived as having failed,” and “the world will never be the same after the coronavirus.” One can reasonably expect that cynicism regarding regional and global integration, as well as radical populism, racism, and xenophobia, will likely all rise across many parts of the world, leading to a transformation of people’s mindsets, behaviors, preferences, and priorities.

For Chinese artist Huang Yongping and other like-minded critics, economic globalization connotes different meanings and phenomena — not all of them positive. Problems such as corruption by officials, economic disparities, financial disruption, social dislocation, environmental degradation, misallocation of public health resources, cultural alienation, and international tensions are common side effects of the globalization process for many countries. Huang’s installation illustrates that “the dream of becoming modern and global always implies the risk of destruction and disaster.” It gives artistic expression to simmering intellectual critiques that the path of globalization was “inevitable,” “irresistible,” and “irreversible.” In fact, many seemingly unavoidable developments during China’s twentieth-century history — Western-style modernization in the first half of the century and Soviet-style radical transformation during most of the second half — were later firmly rejected or displaced.

The real risk for China — and the overarching challenge it faces as an emerging global superpower — is not a scenario in which the government collapses or the country returns to what the Chinese deem “a couple of bad centuries,” like the period following the Opium Wars. China, arguably more than any other country, has benefited enormously from economic globalization. In tandem with its domestic market reforms, the country’s deepening integration with the outside world sparked the “Chinese economic miracle” of the past four decades. In the forty years since Deng Xiaoping launched economic reforms in 1978, approximately 800 million people have been lifted out of poverty in China — 10 times the population of Germany, the most populous nation in Europe.

Just a quarter-century ago, a distinct socioeconomic “middle class” was virtually nonexistent in China. But today, a growing number of Chinese citizens (currently estimated between 400 and 500 million), concentrated in Shanghai and other major cities, enjoy a middle-class lifestyle with private property, personal automobiles, improved health care, accumulation of financial assets, and the ability to afford overseas travel and foreign education for their children. Compared to forty years ago, China’s GDP in 2019 had grown sixty times larger, and its per capita income was twenty-five times higher. The GDP per capita has increased from about US$1,000 in 2001 to US$10,000 in 2020. Based on a 2019 report by the People’s Bank of China, the average value of urban household assets nationwide was about US$454,000, with a median value of US$233,000. In the same year, the average value of household assets among Shanghai residents was US$1.2 million.

The daunting challenge that now confronts China is how to reconcile its rapid ascension to the world’s largest middle-class country and second-largest economy with the fears and reservations of other nations — especially those in North America, Europe, and Australia — who worry that China’s rise in status and expanding outreach will come at the expense of prosperity and peace in the region and the world. China’s Belt and Road Initiative is already reshaping the global landscape — as are other newly established financial institutions in which China plays a key role, such as the Silk Road Fund, the Asian Infrastructure Investment Bank, and the New Development Bank. While some see these Chinese-led initiatives as providing much-needed infrastructure development, capital, and more effective tools for poverty alleviation in developing countries, others consider them as undertakings in “debt-trap diplomacy.”

Most alarmingly, the growing tension between the United States and China has manifested into a prolonged trade war, increasingly hostile criticism of one another’s political systems; highly oppositional stances over issues regarding Taiwan, Hong Kong, and Xinjiang; frequent military exercises near the East and South China Seas, and intensifying competition in 5G, artificial intelligence, cyberspace, and outer space. There is growing sentiment in Washington that the United States faces the potential for a major conflict with China on multiple fronts — strategy, diplomacy, security, military, politics, ideology, economics, finance, science, technology, health, and even education and culture. Some policy makers have recently claimed that Beijing is “weaponizing” the large number of Chinese students enrolled in U.S. universities, accusing these students of pilfering intellectual property and stealing advanced technology.

Similarly, hostile views of the United States are also growing more prevalent in Beijing. The Chinese leadership has increasingly leveraged the PRC’s economic, technological, and military power to retaliate against the United States and its allies. Beijing has elevated state-led industrial policies to promote “national champions,” and it has encouraged more direct competition with Western firms in the high-tech space. Beijing’s “tit-for-tat” approach has further mobilized nationalist sentiment among the Chinese public. To some foreign analysts, the Chinese middle class has acted as a political ally to the ruling Communist party.

The deterioration of U.S.-China relations has taken place at an unprecedented speed and scale. Urgency is building for the world’s most powerful nation and the world’s rapidly rising power to find a way to prevent their mutually reinforced fear and animosity from spinning out of control — a situation that could lead to a direct confrontation or even a catastrophically destructive war. This dire situation seems to echo the pessimistic sentiments held by some in China and conveyed by the art piece by the late Huang Yongping. Perhaps more importantly, this work encouraged people to rethink the significance and value of global integration and cultural exchanges in our precarious world.

At this very critical juncture of growing U.S.-China discord and looming global disorder, American policymakers must not lose sight of the expansive dynamism and diversity in present-day China. The caricature of the PRC as a burgeoning hegemon with aggressive intentions, or as a monolithic, Communist apparatus set on disseminating its ideology and development model, is simplistic and anachronistic.

China today, as exemplified and led by Shanghai, is a crucible of political, socioeconomic, entrepreneurial, cultural, and civil society change resulting from the explosive growth of the middle class. There are, of course, important elements of nationalism, and there is sometimes even anti-American sentiment, among members of the middle class. But this vital group also holds open-minded, worldly views and values, demands government accountability, and possesses a strong desire to work with the United States — a place where many members of this group have studied. Washington should neither underestimate the role and strength of the Chinese middle class nor ostracize and alienate this force with policies that push it toward jingoistic nationalism to the detriment of both countries and the global community.

The future of Shanghai is, of course, unwritten, but there is much to learn by studying where it has been, where it stands now, and the likely ways it could change in the decades ahead. As the most Westernized Chinese city before 1949 — and currently the frontier city of the country’s global integration — Shanghai serves as the ideal case study for evaluating the impact of transnational forces and the interaction between culture and politics, between state and society, between the East and the West.

At the heart of the inquiry lies an open question about the role that China’s middle class will play in shaping the country’s future on the world stage. Will it act as a catalyst for positive political transformation at home, a stumbling block, or something else? Will a rapidly growing middle class, which tends to usher in new expectations and responsibilities for its future, promote a constructive Chinese presence in a rapidly changing global environment? Can a solid understanding of the views, values, and voices of the Chinese middle class, especially the group’s similarities with its counterparts in the West, help mitigate the ongoing “China panic” and American overaction to China’s growing power?

The answers to these questions could not be more consequential as China continues to advance along its path of development. Understanding a core constituency — the middle class — through the prism of the country’s most dynamic city of Shanghai is as promising a place as any to begin seeking answers.