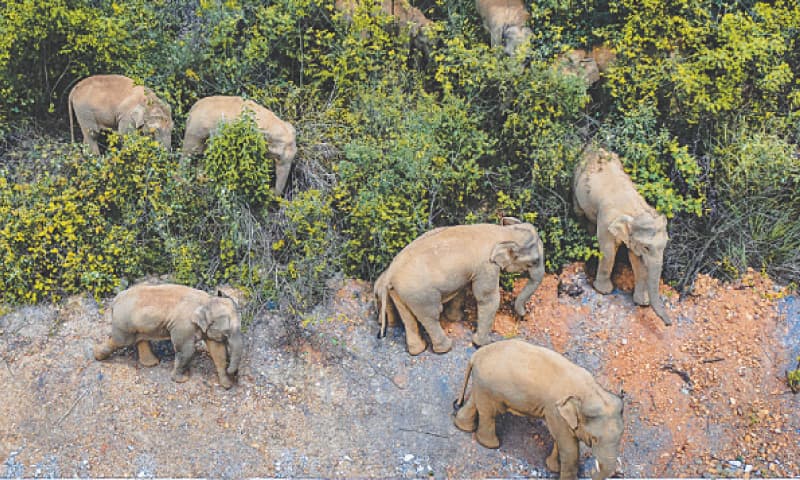 Online followers of the caravan of 15 wild Asian elephants that just entered the outskirts of the capital of Yunnan province have grown concerned about ramifications of the herd’s march across the province.

The herd’s continued northward migration since November has been received with snowballing public interest on Weibo and other social media platforms in China.

As of Thursday afternoon, the hashtag #wild-elephant-herd-entering-Kunming had received 84 million views and more than 4,000 comments.

According to China’s state-run Xinhua News Agency, the herd of 15 elephants reached the boundary of Kunming’s Jinning district at 9:55 p.m. Wednesday.

Early this morning, the elephant herd appeared in the jungle near Shuanghe township in Jinning. At present, dozens of trucks have been standing by at the pass into the urban area of Jinning, ready to stop the elephants from entering.

The wild elephants, which originally lived in the Xishuangbanna Elephant Reserve in Yunnan, have been marching northward since March, already passing through the cities of Pu’er and Yuxi, as well as the Honghe Hani and Yi autonomous prefecture.

Elephant experts have been sent from Yuxi to Kunming to try to predict their migratory route. Twelve drones are monitoring the elephants’ path and 10 tons of elephant food has been set aside.

As elephants approach densely populated urban areas, social media users have grown concerned, and wary. One popular comment noted that it was important to “control some of the internet influencers who find it attention-grabbing,” suggesting that they be prevented from approaching the elephants.

Some social media users joked about the size of the herd in reference to China’s three-child policy, which was promulgated a few days ago. “Three male elephants, three female elephants, and nine baby elephants — what a good model for the national family planning policy!”

One reader expressed concern about this rare elephant migration. “How can they ever return to the forest when people feed them the entire way? Even if they do go back, they will come back next year.”