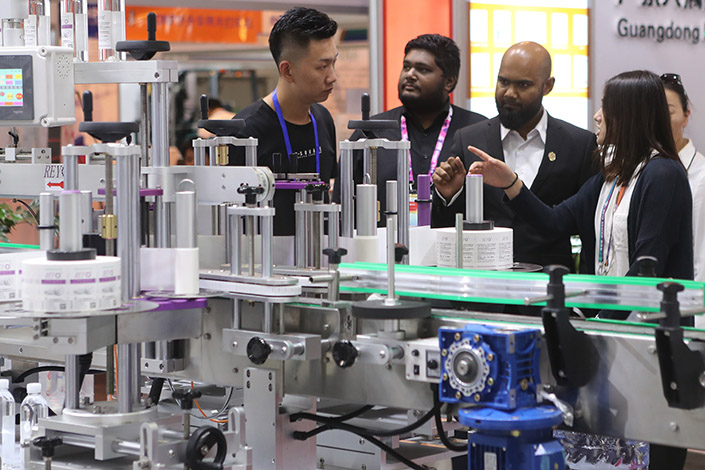 When China began plugging into global production networks and cross-border trade more intensely in the early 2000s, few might have foreseen it becoming one of the most important hubs for many high-tech global value chains (GVCs) by the late 2010s. This is thanks to the country's success in technology adoption and development as well as collaboration with partner countries – cornerstones of its manufacturing-for-exports strategy over the past two decades.

First, domestic value added (DVA) exports for the machinery, electrical and optical equipment sectors. In 2000, China’s share of such exports on a global level was just 5%. Now it is about 30%.

Second, China’s trade linkages with key players have become deeper and more extensive, and the roles of different economies have evolved significantly. The U.S.’ dependence on “made in China” products has increased, making it the biggest net importer of machinery, electrical and optical equipment from China. Not only that, more of the added value is being generated in China. In 2000, the DVA of these exports from China to the U.S. was $14 billion. By 2019, it was $195 billion.

The change in interdependence with China has been stark for Japan. Over the same period of time, Japan switched from being net exporter to China to net importer. Meanwhile, South Korea and Taiwan — two of the four “Asian Tigers” — continue to be important high-tech suppliers to the Chinese mainland. Recently, the more advanced ASEAN economies — Indonesia, Malaysia, Thailand, the Philippines, and Singapore — as well as Vietnam, have become significant net importers of China’s high-tech goods. This development reflects their solid progress in catching up in tech and their increasing participation in regional production networks. From just $3 billion in 2000, these ASEAN countries’ DVA imports from China increased steeply to $54.1 billion in 2019.

Third, China has become an important supplier of intermediate goods in high-tech value chains in Asia. Our analysis of import-export networks shows that China is a key supplier of semiconductors and electronic components to major high-tech exporters in the region. This result is derived by using granular trade data to get at the size, direction and nature of trade in parts for production purposes.

There is indeed a general consensus that manufacturing disruptions in China during the 2020 pandemic have had substantial adverse effects on Asia’s exports to global markets, although the magnitude is difficult to estimate precisely.

The results vary from country to country because the products which these countries manufacture and export are different while the substitutability of inputs from other economies for inputs from China would also differ.

The disruptions in production and trade activities brought about by the Covid-19 pandemic and on-going trade and tech tensions, have prompted much debate about the future of trade. Given the vulnerabilities exposed, close collaboration between China and its regional partners is crucial to strengthening GVCs’ resilience and flexibility.

China’s enterprises, industry bodies, and policymakers recognize these important considerations —for China and for the region. This is why the country’s new “dual circulation” strategy on one hand seeks to achieve greater domestic strength, and on the other, promotes more openness to global trade and partnerships.

As China is pursuing greater self-sufficiency in technology to guard against the heightened risk of prolonged tech tensions with the U.S., its role in technology sharing will become increasingly important for further development and robustness of GVCs in the region.

Doing so will be consistent with the region’s shared vision of deepening integration and prospering together. It will also help to create a new and more resilient global economic order for this decade and beyond.

Foo Suan Yong is a senior economist and Wei Sun was a financial sector specialist at the ASEAN+3 Macroeconomic Research Office (AMRO). The article was written when Wei Sun worked for AMRO.