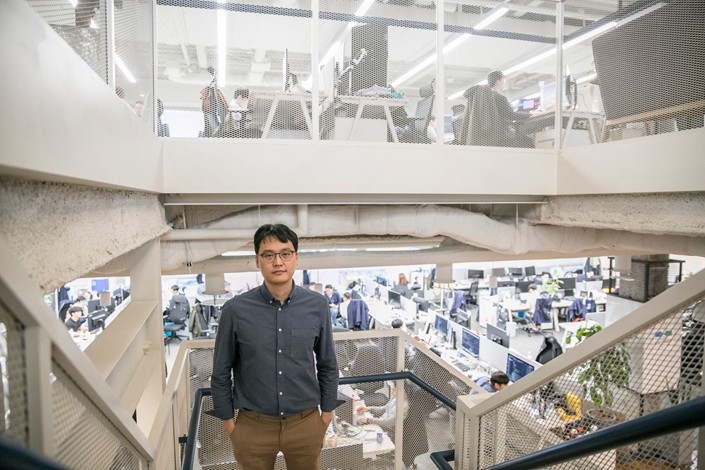 The Seoul-based startup raised $410 million, with more than half coming from foreign investors including Alkeon Capital Management and Altos Ventures, founder and Chief Executive Officer Lee Seung-gun said in an interview. State-run Korea Development Bank pumped 100 billion won ($89.9 million) into the round. It’s considering another fundraising in the first half of 2022 that will be its largest ever and the last before the startup seeks an IPO within the next five years.

Toss is among a handful of global companies like Ant Group Co. Ltd. and Grab Holdings Inc. that are upending traditional financial services with all-in-one digital platforms that offer insurance, payments, credit scoring and even securities trading. It’s planning to launch an online lender as early as September, after receiving South Korea’s third internet banking license earlier this month. That, alongside other services like its fast-growing securities platform, will help Toss double its monthly users to 20 million and grow revenue to 5 trillion won by 2025, a major leap from about 400 billion won in 2020, according to Lee.

“We are at the cusp of the great transition from traditional finance to online finance,” said the 39-year-old founder, clad in a navy short-sleeved shirt and shorts. “We’ve prepared so hard and now it’s time to enjoy the thrills on the roller coaster ride.”

With the latest funding round, Toss has become South Korea’s second-most valuable startup, behind only PUBG creator Krafton Inc., which filed this month for an IPO that’s likely to be South Korea’s largest ever. But unlike the game-maker, the fintech firm and its backers — a roster that includes GIC Pte, Sequoia China and PayPal Holdings Inc. — are in no rush to float, Lee said.

“Our investors believe Toss will ultimately become a $100 billion company so they are not hurrying for an exit or an IPO,” Lee said. “At this moment, we are not preparing or reviewing an IPO but we will list our shares within 3-5 years. Nothing has been decided on destinations for the listing but we are open to options including U.S. or Korea listings.”

The success of Toss means Lee, a former dentist whose eight earlier ventures failed, is poised to join a growing list of billionaires in South Korea. His stake in the startup, approximately in the high teens, is estimated to exceed $1 billion with the latest $7.4 billion valuation. He’s also following other self-made tech entrepreneurs in investing in early-stage startups, and said he wants to use technological innovation to tackle major issues from hygiene to finance, climate change and food.

“The map of wealth is being reorganized,” said Lee, who’s known to pull frequent all-nighters at the office and mentors junior founders in his free time. “It is a pleasure to see the risks that founders took are paying off. I would be happy even if my juniors later push me out of the rich list.”

Toss, which cut losses by 37% to 72.5 billion won in 2020, will use the funds for new businesses such as Toss Bank and Toss Securities as well as expansion in Southeast Asia, Lee said. Already in Vietnam, it aims to enter most countries in the region within two years.

Toss Securities officially opened its mobile trading system in March, seeking to capitalize on a resurgence in retail investing in the country. Within the first month, it amassed two million users — a milestone that took Robinhood Markets Inc. two years to achieve — after a popular promotion where it gave out one random share of South Korean companies. Three months on, it has drawn 3.5 million users and expects to reach 5 million by the end of this year, as it targets overtaking Kiwoom Securities Co. Ltd. to become the country’s largest securities app in terms of users.

The prodigious growth has been mostly driven by users in their 20s and 30s, as a combination of easy money and free time during the pandemic drove a boom in Korean retail trading. In 2020, the number of people aged under 40 who held securities accounts more than doubled to nearly 3.2 million, according to data from Korea Securities Depository, while the amount of securities held by the young individuals increased by 98%.

“There will be no turning back to pre-Covid,” Lee said. “In the midst of low-interest rates and the low-growth economy, individuals strive to make money through investments and the trends won’t change. They’ve already experienced convenient online services during the pandemic and it’s hard to go back.”

Toss is planning to further expand its securities trading service next quarter by adding U.S. equities and ETF trading, increasingly popular among Korean retail investors. It is also considering offering margin trading and automated advisory services in the first half of next year.

Toss Bank, the last piece of the startup’s financial super-app puzzle, also expects the shift to online services during the pandemic to help it compete against traditional incumbents like KB Financial Group Inc. as well as internet-only rivals such as Kakao Bank. About 23% of loans in Korea were made through online lenders last year, an increase from 13% in 2019 and 8% in 2018, Lee said.

Competition in digital lending and payments is heating up in South Korea. With easy access to the hundreds of millions using the messaging service from Korean internet giant Kakao Corp., Kakao Bank and Kakao Pay have expanded rapidly and plan to go public this year. Another rival, K Bank — which has recently amassed new users in the crypto space — is seeking to raise 1.2 trillion won from shareholders including Bain Capital to grow its business.

“The transition to online is getting faster and I think 40% of credit loans will be transferred through online platforms next year,” Lee added. “This and next year are likely to be the biggest transition periods.”

Using the extensive financial data it has accumulated, Toss Bank plans to utilize its new credit scoring system to manage risk in borrowings and offer lower-interest loans to new users to help convert their existing debt. That strategy will boost profits and allow Toss to give higher interest for deposits, compared with the market average, Lee said. The startup aims to have 1 trillion won of deposits and 600 billion won of loans within six months of the launch, he added. It’s targeting 1 million users for the service within this year.

Outside its home market, Toss is growing rapidly in Vietnam, a youthful and tech-savvy nation of 97 million people where just 5% of the population uses credit cards. With about 3 million monthly active users currently, it aims to reach 5 million by the end of this year, as it steps up a rivalry against local payment app Momo and foreign players like Ant and Grab. Toss is also looking to enter Japan, where it sees potential to innovate the country’s fintech sector and win the market, Lee said.

“Seung-gun and his team have already delivered one of the most beloved services in Korea and have now embarked upon an impressive and ambitious future product suite build-out which, we believe, will fuel growth in years to come,” Deepak Ravichandran, general partner at Alkeon Capital, said in a statement. “We expect Toss to be a dominant financial application across multiple Asian markets over the coming years.”