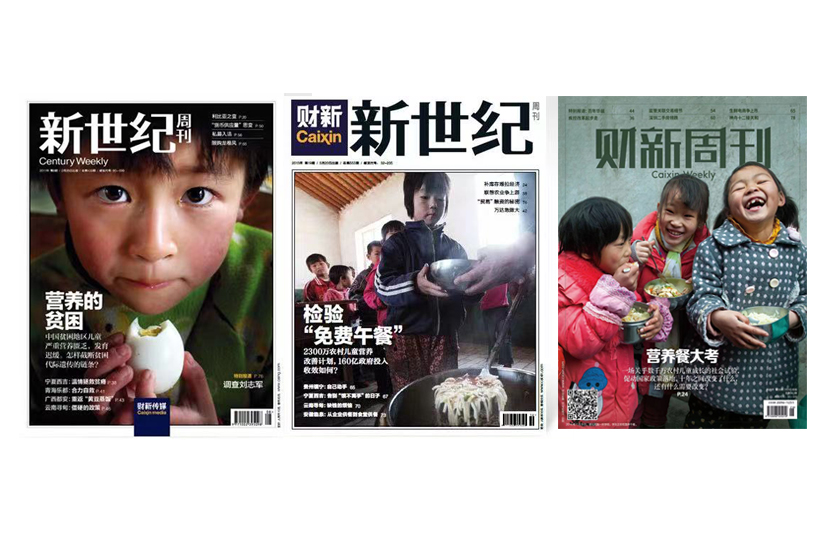 The first cover story, on free meals for students in rural areas, was published in February 2011. This was the year that China Development Research Foundation (CDRF) published a survey on the physical well-being poor students in rural China, revealing that many suffered from malnutrition that hindered growth and contributed to the transmission of poverty across generations. In 2011, the Caixin team sent reporters to various places — including Du’an in the Guangxi Zhuang autonomous region, Xiji in the Ningxia Hui autonomous region, Ledu in Qinghai province and Xundian in Yunnan province — to conduct interviews and surveys. The reporters’ fieldwork resulted in the series, “Nutritional Poverty,” a collection of texts and photos dedicated to bringing local children’s struggles to light.

The response to the series has been huge. Scholars have made informed suggestions, and readers have sent in heartfelt messages. Since 2007, the CDRF has conducted nutritional meal trials across China, demonstrating the necessity and feasibility of intervention. Meanwhile, public welfare activities in support of these actions have gathered steam.

On Nov. 26, 2011, the Standing Committee of the State Council decided to launch a nutrition improvement plan for rural students receiving compulsory education. The central government has invested more than 16 billion yuan ($2.47 billion) in supporting 26 million students with 3 yuan per day in food subsidies. With this, China became a country in which the government proactively supported student nutrition via financial investment. By October 2012, national and provincial pilots had provided 33 million rural students with nutritional food subsidies. (See our previous stories in Chinese: “Nutrition Improvement Program for Rural Primary and Secondary School Students Launched by the State Council” and “Nutritional Meals Provided to 33 Million Rural Students”)

The second cover story on the topic came two years later. After the government’s 16 billion yuan investment, what were the results? The article published on May 20, 2013, provided the latest updates on the nutritional meal program for rural students. For this, Caixin revisited Xiji and Xundian, and sent reporters to Zhenning in Guizhou province and Linquan in Anhui province to explore food supply models.

At the end of 2012, the National Student Nutrition Office issued a notice to implement local responsibilities, encouraging rural schools to set up canteens as soon as possible. (See our previous stories in Chinese: “The State Council Requires Rural Nutrition Intervention Pilot Schools to Set Up Canteens” and “Report: The Nutritional Meal Plan Has Achieved Remarkable Results, Local Governments Suggested to Pay for Canteens”). Implementation proved rather difficult. The CDRF’s survey showed how the program had greatly improved rural students’ nutritional situation, which had helped the students’ physical and intellectual development but to ensure the program’s sustainability, a more rigid systematic structure was needed. When reporting on the CDRF’s survey, Caixin discovered that on top of the 3 yuan provided by the central government, another 0.8 yuan per student was needed to cover other operational costs, money that 11.97% of the counties concerned did not have.

In 2014, the amount provided to the pilot schools by the central government increased to 4 yuan and the total amount to roughly 20 billion yuan.

Since then, the implementation of nutritional meals has experienced more twists and turns. For issues ranging from the diversity of dishes to the difficulties of grassroots implementation and from the rise of prices to supervision and monitoring, Caixin has been there to follow up and report. (See our previous stories in Chinese: “Poor Primary School Students’ Meals Need More Meat,” “Nutritional Meals Cause a Stir, Reporters Secretly Visiting Beaten,” “What is Obstructing the Implementation of Nutritional Meals? Poor Schools Use Money to Make Up for Lack of Supporting Facilities,” “Students Getting Tired of Egg, Nutritional Meals Needs More Diversity,” “Are the Nutritious Meals Provided to 23 Million Rural Children Good? Survey Shows Growth Increase by 5 Centimeters,” “Rise of Vegetable and Meat Prices, Are the Nutritional Meal Subsidies Enough?”)

Ten years have since passed since the nutritional meals policy was put into place, and Caixin has sent reporters to visit Du’an again. This was where, 10 years ago, students had only steamed rice with soybeans to fulfill their daily protein and vitamin needs. For Caixin’s third cover story, “China’s 10-Year Campaign to Nourish Rural School Kids,” the reporters made visits to schools, government departments and families of students to delve into changes over the last 10 years and to see what challenges lie ahead.

To make sure students eat well, the CDRF’s subsidy standard has now been raised to 5 yuan. Now, ensuring the success of the program in the long term means strengthening legal and institutional aspects.

Over these 10 years, the nutritional meal program has boosted rural students’ growth remarkably. With sufficient nutrition, they grow taller, have healthier bodies and better development possibilities, and it is only natural that they feel thankful for the care they have been afforded by society. The program’s achievements help quantify the government’s poverty alleviation efforts, and additional support will have an even more profound impact on China’s future development.

Apart from the three cover stories, Caixin has published more than 100 articles on early childhood development in the past decade. Caixin will always continue to pay close attention to the progress of policies regarding children and equitable growth. Policy intervention in children’s early development ensures that rural children receive the same opportunities in life as urban children, which makes it an effective way of solving the problem of social equity. And as China’s rural children of today will be the main forces of economic and social development tomorrow, their healthy growth is crucial.

Ren Bo is a deputy managing editor of Caixin Media.