Photo Essay: A Living Dug Out of the Mud 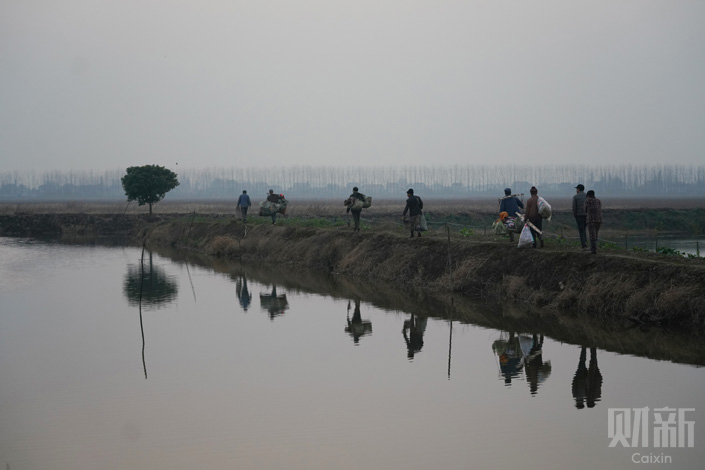 In the early morning, the lotus diggers walk towards the lake with their tools: a shoulder pole, a spade, and a piece of plastic sheeting. They use the simplest as well as the most primitive tools to dig out the roots. Extremely long, these roots are invariably hiding at the deepest parts of the lake, requiring skill and strength to haul onto land.

Through the morning fog, the trees in the distance are precisely spaced like the teeth of a comb. A line of people passes by on the narrow riverbank, leaving their reflections on the water. If you didn’t know better, you might mistake the scene for an outing. But in fact, these are lotus root diggers who woke up early, grabbed their tools and headed en masse towards Tuan Lake.

Tuan Lake is a "lake within a lake", silted up to contain a field of lotuses. Over the years, Dongting Lake in northeastern Hunan province has played host to a temporary hoard of the plants. Every year when the root harvesting season comes around, passers-by see diggers scattered across the silt among withering lotus leaves. Walking in the mud with great difficulty, their bodies partly submerged, they put out the lotus roots one by one, using their years of experience and skill. They suffer from rheumatism and frostbite from years of digging, but have no choice but to wade in again and again in order to make a living.

Trapped by the silt, these are the industrious laborers at the bottom of the social ladder. Lotuses are extremely long, hiding at the deepest parts of the lake, and you have to be strong to reach the root. When digging, these workers use the most primitive of tools – a root shovel. When they get a large one, they hold it up in excitement, as if showing off a trophy. The heavier the root, the larger the remuneration. The visible and tangible lotus roots bring in joy in direct proportion to financial harvest. Each shovel plunged deep into the mud reinforces this reciprocity with the land.

This has been the relationship between the majority of laborers and the land for thousands of years: they work on the land and receive its gifts. It is an ancient contract that may not be free from hardship, but it incomparably loyal. Except for the unexpected blow of a calamity, a farmer can get a secure return from the land as long as he puts the work in. Chinese essayist Li Juan wrote in her book Distant Sunflower Field, "The power of the hands cannot change the sky nor the earth, but it is just enough to sustain the life of an individual. It happens to make food come out of the earth and out of the fireplace." These words describe the relationship between the root-diggers and the earth, as they live in the lake, laboring in the mud, earning wages to support their wives and children on shore. Their life is undoubtedly hard and poor, but in a world full of speculation and fraud, this way of getting paid -- simply and through solid labor -- is also a way to feel secure and at peace.

A member of the root-diggers community, Chen Xinguo, said, "I never stop thinking about how great it would be if I didn’t have to do this one day." Every day before bed, he picks up his phone and scroll through the photos of his two daughters, who he says are his motivation. He plans to quit when his elder daughter finishes her master’s. Root diggers rarely speak out about their feelings or express any resentment. They just work silently in the wintery lake. In silence, they labor, they support families, and they grow old.

For them, this photo shows an ordinary morning, the beginning of a new day of work. Yet at the same time, it looks like they are solemnly advancing on the battlefield of life, bearing its hardship and its glory.