Opinion: Why Forced Drinking Culture Is Worse Than You Think 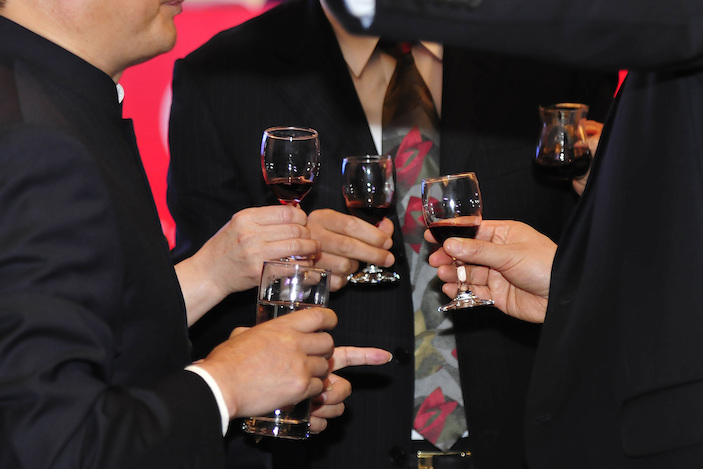 Quanjiu (劝酒) is a common social phenomenon derived from East Asian society, where personal connections are more important than agreements and contracts.

The Alibaba incident has once again aroused public concern over China’s “quanjiu” culture, the culture of forcing others to drink alcohol.

An Alibaba employee Saturday accused a client of sexual harassment and her manager of rape during a business trip when she passed out after being pressured into consuming alcohol during a dinner with clients. Alibaba said it would fire the accused employee, and it accepted the resignations of two executives.

Quanjiu (劝酒) is a common social phenomenon derived from East Asian society, where personal connections are more important than agreements and contracts. However, the adverse effects and negative consequences of the quanjiu culture are worse than we think.

In China, there are many old sayings related to drinking. For example, “one refuses a toast only to drink a forfeit,” and “a banquet without alcohol is no banquet at all.” The drinking culture is deep-rooted in our life and traditional culture.

Quanjiu is its core. Alcohol can bring a dinner party to life.

In China, there are mainly four occasions where it is difficult to refuse to drink:

1. Drinking between superiors and subordinates. In government agencies, public institutions and companies, a dinner party is always organized after new employees’ induction, at annual conferences or festivals, or after the completion of major projects.

It is an unspoken rule that a person’s job title is in inverse proportion to his or her obligation for drinking on these occasions. Those in a position of seniority can drink less, while those at the bottom of the pecking order must drink a lot. Being urged to drink on such an occasion reveals the power culture.

2. Drinking between customers and business personnel. In a company, those skillful in sales are real talents. It is a twice-told tale that if you drink an additional cup of wine together with your customer, your customer will sign an extra contract. To improve performance, sales personnel have to drink. Drinking is what finalizes a deal.

3. Drinking between men and women. When it comes to drinking at dinner parties, men usually outnumber women and will often ask the women to “drink with them to liven things up.” If women consume just soft drinks or tea, they cannot blend into the party. This peer pressure often forces the women to join in.

If one woman takes the initiative to drink, it will be even harder for other women to resist. Most women really hate these occasions, which displays the gender discrimination in this male-dominated culture.

4. Sometimes the “weak” are the ones urging the “powerful” to drink. If you do well in a big city and go back to your hometown on a holiday, your close friends or relatives may prepare a banquet for you. On that occasion, when a grassroots official or a classmate from primary school whom you may not be familiar with raises a toast and takes the initiative to drink first, do you refuse or accept? If you refuse or drink less, the person giving the toast will say that you are looking down on him. This is moral kidnapping.

So, is it only Chinese people who engage in such drinking behavior? Not exactly.

In Japan, workers often drink their way after hours from one izakaya, or bar, to another, until they are too drunk to continue. At midnight on the streets of Japan, it is not uncommon to see drunken Japanese in suits acting like fools. The Japanese do not directly urge others to drink, but a male employee who refuses to drink with his colleagues will be considered lacking in team spirit and will be squeezed out by others.

In South Korea, people often urge others to drink, leading to many deaths from alcohol every year.

Why is this quanjiu culture popular in East Asia? Because the East Asian society is built on human relations, where people value others’ recognition of one’s identity.

It is often said that “with contacts, you can get it done” and that rules come second. To integrate into such a society, relationships play a significant role. The key is how to gain the trust of others, transforming from a “stranger” to an “acquaintance.”

Under conditions of information asymmetry, how can we gain the trust of others? You have to pay a price to convince others of your sincerity. In economics, this is called “signaling.”

Drinking is just another way of doing it. Because excessive drinking is harmful to health, one can naturally gain others’ trust by drinking — making it a way of paying a price. In this kind of environment, it seems that the more you drink, the more you respect and care for the other party, as you are willing to sacrifice your health for the relationship.

In addition, psychologically speaking, alcohol makes people more relaxed, less defensive and more likely to speak their mind. Some people also use alcohol to better get to know the other person’s real thoughts, attitudes and abilities.

It is because drinking has a strong signaling function that people who urge others to imbibe — whether superiors, clients or the “weak” — naturally look down on the other party with a condescension and a “feeling of moral superiority.” They call this “testing” people.

However, the signaling function of drinking is overrated. Demonstrating character, loyalty and ability through drinking ultimately leaves one in a vulgar state while impairing health to build relationships. Essentially, this is a typical “prisoner’s dilemma.”

Further, drinking as a signaling mechanism is not only inefficient but also unfair. Obviously, it is unfair to people unable to drink and workplace newbies, and it actually encourages a power culture. On the other hand, the “weak” fawning over the “strong” through drinking fosters a culture of servility.

People good at drinking take this for granted, regarding it as a natural advantage. But economic research based on cross-country data shows that women are less involved in corruption, meaning that countries with more women in senior government positions have lower levels of corruption.

My colleagues and I analyzed 367 cases of corrupt officials at and above the departmental level from 2000 to 2014 and found that the proportion of corrupt female officials was much lower than among males. One reason is probably that because of family roles and gender characteristics, women are less likely to participate in recreational social activities such as drinking and sauna bathing, thus reducing the risk of being caught up in corruption. Drinking culture fuels corruption.

Contractual society does not welcome the drinking culture

Human society has evolved from an agricultural to a commercial civilization. In terms of social relations, it has developed from a human society to a contractual society. Substantially, the modern market economy implies a kind of commercial civilization and characteristics of a contractual society, and the two are underpinned by the spirit of contracts.

First, a contractual relationship means equality and voluntariness without strict hierarchy. In such relationships, there is a division of work but no servility or nobility. So no one has the right to force others to do anything they don’t want to do, including drinking.

Second, a contractual relationship symbolizes an impersonalized trading mechanism, which attaches greater importance to rules and less importance to human relations. Avner Greif, a world-renowned economist and professor at Stanford University, compared the rise and fall of two Mediterranean cities between the 10th and 14th centuries.

In one city lived Genoese, who also did business with non-Genoese and ensured the enforcement of contracts through official courts. In another city lived the Maghribi traders, who practiced personalized transactions, did business only with Maghribis and maintained contractual relationships through reputation and word of mouth. In the end, the business of the Genoese grew bigger and bigger, while that of the Maghribis declined.

Greif’s research offers a profound warning that organizations based on the personification concept and consanguinity are shaky in modern business society. The high-cost signaling mechanism of drinking may be conducive to business dealings among acquaintances in the short term, but it hinders the expansion of the market economy in the long run.

Third, the contractual relationship sets boundaries, requires respect for equal rights and responsibilities and separates public from private interests. Some leaders or bosses tend to regard the company as their “turf” and their employees as their property. This is actually a trite idea of the identity society and is not compatible with the modern market economy or the contract society.

In theory, the employment relationship between boss and employee is subject only to the agreed scope. After working hours, employees are entitled to allocate their time and energy freely and to enjoy family life. Unless voluntarily, employees are under no obligation after hours to continue obeying the authority of the employer, including attending dinner parties organized by the boss.

China is on the verge of becoming a high-income country. However, if people cannot enjoy a life with dignity after working hard to earn money, then what is the point of crossing the “middle-income trap?”

Traditional culture can be an asset and a burden. If we improperly treat the burden as an asset, it is more than a corrupt custom but a far-reaching “cultural mismatch.”

The contractual society thus does not welcome the drinking culture. To become a modern market economy country, China must abandon it.

Nie Huihua is a professor at the School of Economics of the Renmin University of China.