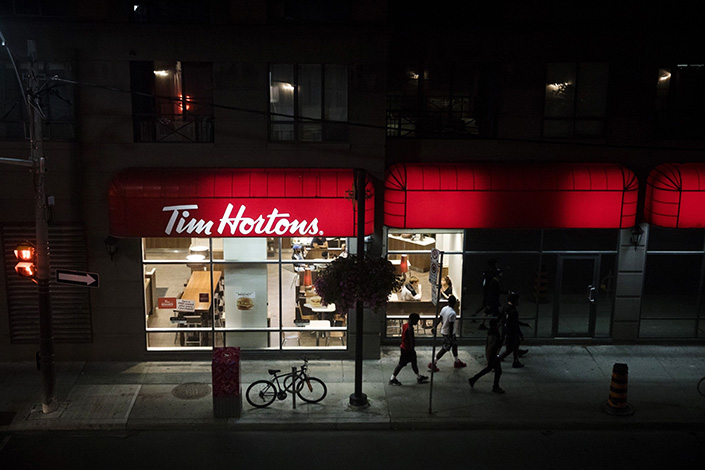 Pedestrians walk past a Tim Hortons in Toronto. Photo: Bloomberg

(Bloomberg) — The joint venture that runs the Chinese locations of iconic Canadian coffee shop chain Tim Hortons is nearing a deal to go public through a merger with blank-check company Silver Crest Acquisition Corp., people familiar with the matter said.

A transaction could value the combined entity at about $1.8 billion and an announcement could come as early as this week, the people said, asking not to be identified because the matter is private.

There are more than 4,900 restaurants globally under the Tim’s brand, according to RBI’s website. Shares of RBI rose 0.4% Thursday.

Tim Hortons China, a joint venture between private equity firm Cartesian Capital Group and a subsidiary of RBI, said in a statement in March that it had completed a funding round led by Sequoia Capital China and existing investor Tencent Holdings Ltd., and with participation from Eastern Bell Capital.

The Chinese master franchise holder opened its first outlet in the country in 2019, and has more than 150 shops across 10 cities in the country. It aims to expand to more than 1,500 Chinese outlets.

Silver Crest raised $345 million in a January initial public offering and said it was seeking a target in the high-growth consumer and consumer technology sectors. It counts veteran banker Christopher Lawrence as vice chairman and Ascendent’s Derek Cheung as chief executive officer.