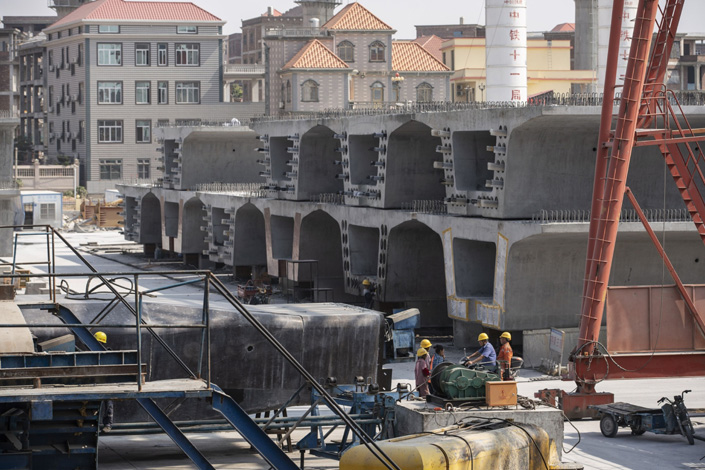 (Bloomberg) — The slow pace of borrowing by local governments in China and curbs on the property market mean the economy will receive less of a boost this year from infrastructure investment than initially thought.

Cities and provinces will sell about 1.8 trillion yuan ($277 billion) in local government special bonds by the end of August, data compiled by Bloomberg show, amounting to 48% of their quota for the year.

At the same time last year, about 75% of the quota had been sold as local authorities ramped up spending to pull the economy out of its pandemic-induced slump.

While local governments have had less pressure to spend this year as the economy rebounded, the recovery is slowing into the second half of the year, turning the focus back to fiscal support. The outlook for spending doesn’t look so good though.

On top of slower bond sales, local government revenues are taking a hit from restrictions on land sales. They are also being pressured to cut debt. That means there’s less money to spend on infrastructure in what is usually the peak season before it becomes too cold for outdoors construction.

Even if the speed of bond issuance picks up later, a lack of motivation from local governments, lack of good projects and strict project reviews will still slow down the utilization of the money, he said, meaning some of the money will be saved for next year.

Infrastructure investment in July fell 10% from a year earlier, the weakest since the pandemic last February, data from Huachuang Securities Co. Ltd. showed. On a two-year average basis, which strips out the effect of last year’s contractions, it fell 1.6%, they calculated.

Some local governments are considering saving some of this year’s bond sale quota for December, so that the money raised can be used on projects early next year, according to media reports.

That fits in with a new pledge from the Communist Party’s Politburo to strengthen so-called “cross-cyclical adjustments,” where authorities aim to stretch out the effect of stimulus to smooth out growth.

The government is taking advantage of the economy’s rebound to tackle various economic risks, such as increasing controls on the property sector and house prices, strengthening technology sector regulation, and pushing local governments to reduce both on and off-balance sheet debt.

Local governments rely heavily on land sales and the property controls have hit their revenues for infrastructure. A campaign to deal with so-called hidden, or off-balance sheet, debt is also forcing some authorities to repay loans and bonds or to bring the debt onto their own balance sheets.

“The rapid growth of infrastructure investment in the past has a lot to do with the expansion of hidden debt,” said Li Qilin, chief economist at Hongta Securities Co. Ltd. “That’s been curbed this year so even if the special bond quota is increased, it is difficult for infrastructure to recover quickly.”