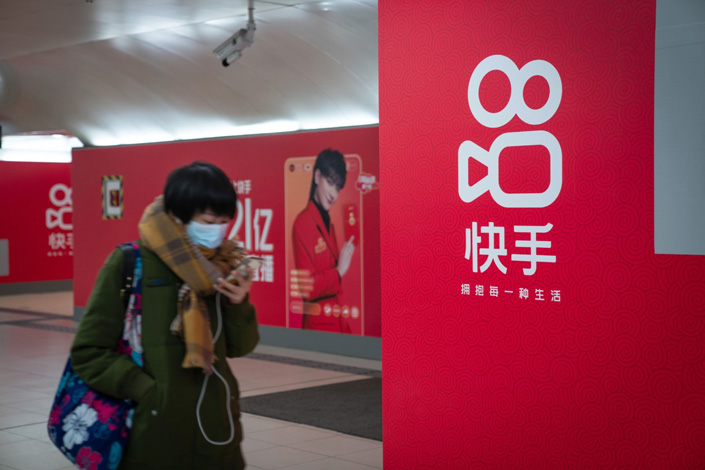 A passenger wearing a mask walks past Kuaishou Technology advertisements at a subway station in Beijing, China, on Wednesday, Feb. 3. Photo: Bloomberg

(Bloomberg) — Kuaishou Technology tumbled the most in nearly three weeks after reporting a wider-than-expected loss as the short-video giant increased spending to retain users.

The stock sank as much as 12.5% in early trading Thursday, the most since Aug. 6. Monthly and daily active users slid from the previous quarter and its net loss of 7 billion yuan ($1 billion) exceeded the 6.25 billion yuan projected, even as sales rose a better-than-expected 49% to 19.1 billion yuan for the three months to June.

Kuaishou, the operator of China’s most popular short-video platform after ByteDance Ltd.’s Douyin, is grappling with an influx of rivals from Bilibili Inc. to Tencent Holdings Ltd.’s WeChat. It’s going on a spending spree to try and maintain loyalty among the country’s youth, deploying a generous marketing budget into newer areas like ecommerce and gaming. Its selling and marketing expenses more than doubled to 11.3 billion yuan in the second quarter, with overseas businesses accounting for about a third.

But even as it boosted spending, revenue from live streaming shrank 14%, a steeper decline than in the previous three months.

“While acquiring overseas users looks cheaper versus at home in China, we ultimately question the profit potential of Kuaishou’s overseas adventures, especially in the context of Tiktok’s much greater scale — yet significant enduring losses,” said Bernstein analysts led by Robin Zhu.

Away from the business, Kuaishou has shed roughly $180 billion in valuation since notching a record shortly after its February debut. Beijing’s campaign to rein in big tech has ignited a trillion-dollar selloff in Chinese equities and upended industries from education and ecommerce to ride-sharing. Kuaishou is now trading below its listing price, after state media urged tighter regulation of internet video content and share lockups expired for some investors.

The company has recently turned abroad and toward advertising in its search for new revenue. Online ads have surpassed virtual gifts to become Kuaishou’s biggest cash cow, with founder Su Hua projecting a 60% revenue contribution by the year-end. But China’s for-profit tutoring ban and a resurgence of Covid-19 cases globally will likely deal a blow to advertising revenue from the edtech and travel sectors.

Kuaishou’s continued rapid growth of online advertising revenue may fuel sales growth above consensus for the remainder of 2021 after 2Q revenue topped estimates. Kuaishou is diversifying its revenue streams away from traditional live-streaming with a big push into e-commerce marketing. Though heavy investment to grow the new marketing business is driving losses in the near-term, Kuaishou’s adjusted Ebitda loss narrowed 21% sequentially, suggesting a path to profitability in 2022.

While Kuaishou’s overseas revenue is still negligible compared to ByteDance’s TikTok, Su’s company intends to close the user gap with its bigger foe in countries like Brazil and Indonesia. That’s despite it shutting down the Zynn video app this month, ending a year-long attempt to challenge TikTok in the U.S. In June, the company chalked up 180 million monthly users in overseas markets, up from 150 million in April.