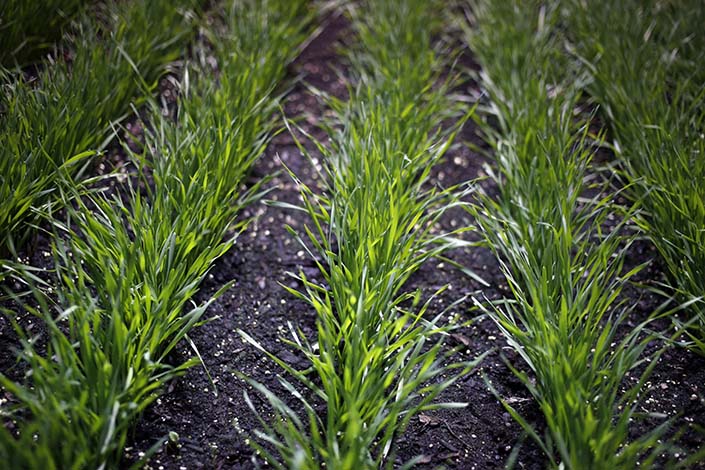 Syngenta’s genetically modified wheat is displayed in February 2020 at the National Farm Machinery Show in Louisville in the U.S. Photo: Bloomberg

(Bloomberg) — Syngenta Group, the Swiss agriculture giant that’s preparing for a $10 billion Shanghai listing, said earnings climbed 22% in the first half, propelled by better sales and contributions from its operations in China.

Earnings before interest, taxes, depreciation and amortization rose to $2.7 billion in the first six months from $2.2 billion a year earlier. Sales increased 24% to $14.4 billion, the company said in a statement Thursday.

The solid results come as the Swiss seed and fertilizer business owned by China National Chemical Corp. (ChemChina) is preparing to list on Shanghai’s Nasdaq-style STAR Market in what could become the world’s biggest initial public offering this year. Since ChemChina’s acquisition in 2017, Syngenta has incorporated the agricultural units of ChemChina and conglomerate Sinochem Corp., including Israeli crop protection firm Adama Ltd.

Syngenta’s China unit posted a 47% gain in first-half sales to $4.2 billion. Its crop protection business boosted sales by 35% while that of seeds tripled.

China is a big growth area for the company amid a food self-sufficiency drive, with Beijing vowing to accelerate innovation in the seed industry. Once wary of genetically modified crops where Syngenta has an edge, the country has loosened restrictions. GM feed grains are set for commercial production, and some strains of corn and soy for animal feed have already been approved.

The company attributed its record first-half results to elevated grain prices, which resulted in increased planted area and higher demand for services. Demand was strongest for products that help farmers cope with drought in North and Latin America, as well as cold snaps in Europe and floods worldwide.

In Central China’s Henan province, where severe flooding last month killed more than 300 people, farmers worked with Syngenta to use satellite images to see where the worst damage took place, and then dispatch drones for targeted fungicide and biostimulant applications. This allowed them to recover most of the crop.