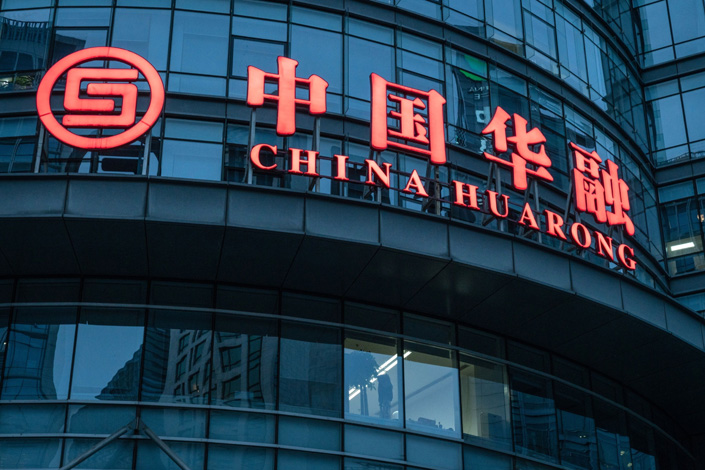 Huarong’s headquarters in Beijing on May 19. Photo: Bloomberg

(Bloomberg) — China Huarong Asset Management Co. Ltd. is set to reveal the full extent of its financial health after flagging record losses last year and clinching a government-orchestrated bailout to keep it from the precipice.

The bad-debt manager, which had strayed far beyond its original mandate into a myriad of risky ventures, will on Sunday release its long-overdue 2020 results as well as its earnings for the first half of 2021. As it outlined the framework of its rescue on Aug. 18, the Beijing-based firm said it suffered a preliminary loss of 102.9 billion yuan ($15.9 billion) last year.

Trouble emerged in late March when Huarong, controlled by the Ministry of Finance, delayed its annual report, roiling markets across Asia amid concern over whether it could cover its $242 billion in liabilities — including about $21 billion of offshore bonds. The firm said last week that state-owned investors led by Citic Group would step in to restore its capital, ending months of speculation over whether Beijing would deem the troubled financial giant too big to fail.

“The results will definitely show poor performance, but that has mostly been priced in,” said Wu Qiong, head of fixed-income research at BOC International Holdings in Hong Kong. “Investors are looking for some details and hopefully positive signs that can lead to maintaining its rating. There’s still a possibility we will see these positive details.”

Huarong’s loss in 2020 signals the firm is likely to make a massive write-off on bad investments, with potentially a big chunk of still unresolved risky assets on its balance sheet. It would also wipe away nearly 60% of its 168 billion yuan of equity as of June last year. China’s banking regulator set a minimum 12.5% capital adequacy ratio for bad loan asset managers, with at least 9% of core tier-1 ratio.

The projected 2020 loss “could result in a failure to comply with the minimum regulatory requirements on capital adequacy and leverage, and indicate that the company cannot sustain its operation without support arranged by the government,” Moody’s Investors Service said on Monday, after cutting Huarong’s credit rating and warned of more potential downgrades.

The unprecedented shortfall highlights the dilemma Beijing faces in resolving a crisis that has hammered markets while trying to instill more discipline in its bloated state-owned firms. The drawn out rescue showed the problem Beijing is grappling with in whether to still shield state-owned borrowers from market forces as President Xi Jinping has revived an old campaign to rein in leverage amid surging defaults.

Huarong is poised to receive $7.7 billion of fresh capital as part of an overhaul plan, people familiar with the matter have said. Control of the company would shift to Citic, the people have said, though details were still being finalized and could change.

But doubts remain whether it’s out of the woods. The embattled conglomerate has been effectively frozen out of the bond market since the second quarter even though it has met its debt obligations and reassured investors that it wouldn’t seek to restructure its debt. Bondholders will watch out any mention of the size and timing of the bailout on Sunday.

Beijing’s ultimate decision is being closely scrutinized by investors for its broader implications. A recapitalization would neutralize a potential systemic risk to the financial system and make it easier for other state-owned borrowers to tap the country’s $12 trillion credit market.

For shareholders, it’s uncertain whether Huarong’s stock will resume trading after being suspended since late March. The shares had plunged 67% since debuting in Hong Kong in 2015.

Huarong was once a darling at the top of the financial world. For example, Warburg Pincus and Goldman Sachs Group Inc. were among a group of investors that bought a $2.4 billion stake in the firm before it went public in 2015.

The company is now looking to sell nearly all of its units outside of distressed debt as part of a government-approved downsizing plan, people familiar with the matter have said.

The bad-debt firms later expanded beyond their original mandate, creating a labyrinth of subsidiaries to engage in other financial businesses and borrow billions from the bond market. Huarong was the most aggressive of the four under former Chairman Lai Xiaomin, who was executed in January for crimes including bribery.