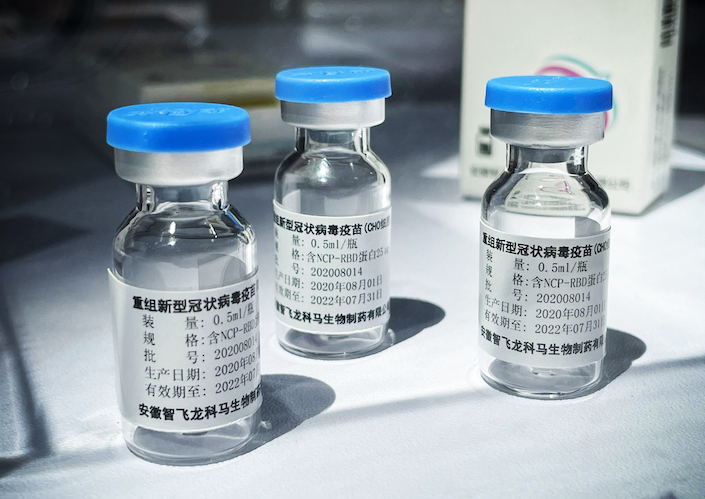 In late-stage clinical trials, the ZF2001 vaccine was 92.93% effective against the alpha variant and almost 78% against the more-infectious delta version, the Shenzhen-listed company said Friday in an exchange filing. It did not say whether those two figures were just for serious illness or for all symptomatic infections including mild cases.

None of the people who received the shot entered critical care or died, it said. The results were based on an interim analysis of 221 infections in a study of 28,500 people.

Zhifei’s shot is the fifth developed in China that has been validated in a large clinical trial in places still battling outbreaks. The vaccine was co-developed with the Institute of Microbiology at the Chinese Academy of Sciences, the country’s top scientific research organization. Its efficacy against the alpha variant appears to be one of the highest among Chinese Covid-19 vaccines.

Zhifei launched Phase 3 trials, the final study required before gaining authorization, in December in Uzbekistan and began testing in Pakistan in February. The vaccine is also being tested in Ecuador and Indonesia. China approved the vaccine for emergency use March 10, and it’s now among several being administered across the nation.

The vaccine uses a similar technology to Novavax Inc.’s shot, which boasts 90% efficacy against symptomatic Covid but appeared to be far less effective in an earlier study against the beta variant. In comparison, the mRNA vaccines from Pfizer Inc. and Moderna have largely held up well against variants, including the delta strain that was first found in India and has spread to more than 100 countries.