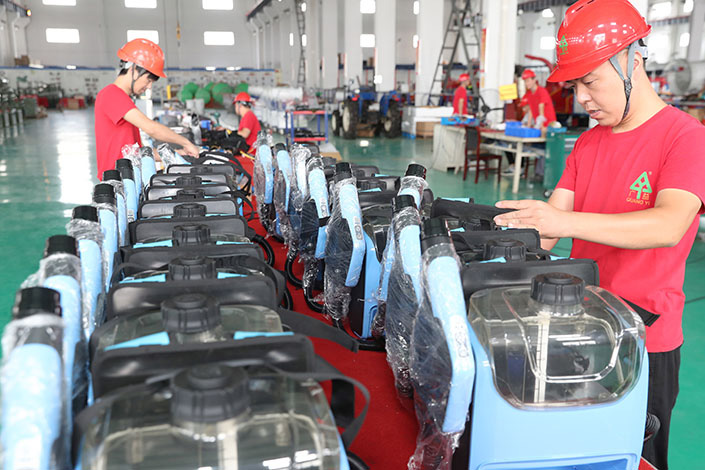 The rally in commodity prices has been a major driver of factory-gate inflation this year, and even though the government has taken targeted steps to curb the rapid price gains, such as boosting supplies and attempting to cutting back on hoarding, they’ve had limited effect so far.

PPI gains aren’t being passed through to consumer inflation, which remained subdued in August, largely because of falling food prices and a drop in spending on travel services such as air tickets, tourism and hotel accommodation after the government imposed stringent controls to curb virus outbreaks.

“The gap between CPI and PPI reflects the delay in the transmission of price increases in upstream to downstream sectors,” said Bruce Pang, head of macro and strategy research at China Renaissance Securities Hong Kong. “The pace of transmission from PPI to non-food CPI will be an important consideration to the People’s Bank of China (PBOC) and other policy makers.”

The surge in PPI was largely due to rising prices of products such as coal, chemicals and steel, Dong Lijuan, a senior statistician at the bureau, said in a statement. Output prices in the coal mining industry grew the fastest, up 57.1% in August from a year ago, according to an industry breakdown by the NBS.

Pork prices, a key element in China’s CPI basket, declined sharply in the month, resulting in the biggest drop in the food price index since 2017. Core CPI, which strips out volatile items such as food and energy, rose 1.2%. Non-food CPI climbed 1.9% from a year ago.

“If pork prices start to rebound from a trough, the CPI could also rebound modestly, and policy measures including releasing reserves, tariff adjustment and increasing coal and steel capacities could be kept in place or even dialed up,” Pang said.

“Even with the sharp upside surprise in China’s factory-gate prices in August, the basic picture remains the same — price stability is probably still less of a concern than growth stability for the central bank — especially with the slowdown in consumer price inflation. Commodity prices continue to light a fire under producer prices, while the delta outbreak is weighing on consumer prices. On the whole, inflation remains in check, said Eric Zhu, Bloomberg’s China economist.

The PBOC sees inflation pressure in the economy as controllable, saying last month that the pickup in producer prices in the first half was likely temporary. The economic recovery has also lost steam recently following the outbreak of new virus cases, adding to downward pressure on inflation.