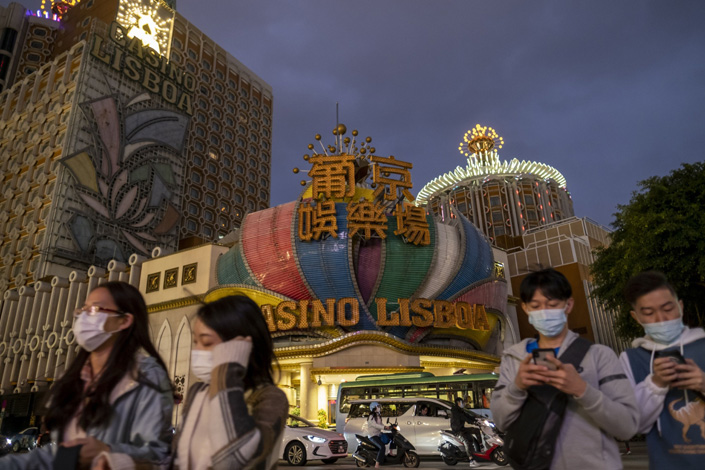 The Bloomberg Intelligence index of the six big casino operators fell by a record 19% in trading Wednesday before slightly paring losses. American operators saw the worst selloffs, with Sands China Ltd. sinking as much as 28%, while Wynn Macao Ltd. plunged 34%, both the steepest declines ever. Galaxy Entertainment Group slumped 18%, its sharpest drop in a decade.

Officials in the enclave, the only place in China where gambling is legal, said they would begin a 45-day public consultation period on Sept. 15 to discuss the legal revisions. Among the topics being covered: how many licenses — known locally as “concessions” — will be allowed, how long their terms will be, and the level of supervision by the government.

While license renewals have been expected for some time as the current ones expire next June, the move to tighten regulatory control took the industry by surprise. Besides appointing government representatives, the revisions also propose increasing local shareholdings of casino companies, without elaboration on how these moves will be enacted. Dismay rippled through industry players and analysts after the announcement as China’s ongoing clampdown on sectors from gaming to after-school tutoring appears to have reached Macao at last.

“The casino issues are a continuation of what’s been a pretty big crackdown,” said Jason Ader, the chief executive officer of New York-based investment manager SpringOwl Asset Management and a former Las Vegas Sands Corp. board member. “There’s a debate over whether China is even investable right now. You never like to see increased regulation, increased taxes, restrained movement. That all seems to be the status quo.”

JPMorgan Chase & Co. analyst DS Kim downgraded the six operators to sell or neutral weightings in a Wednesday research note. “We think this announcement would have already planted a seed of doubt in investors’ minds, which is probably enough to de-rate these names until clarity emerges on key points,” he wrote.

The tightened scrutiny comes at a time when Macao is still struggling to recover from the Covid-19 pandemic, which prompted the government to restrict travel, cutting off the economy’s lifeblood of Chinese gamblers. Gaming revenue for the month of August was 82% lower than the same period in 2019.

Among the items officials discussed in a press conference Tuesday were tighter controls on the distribution of dividends, greater participation by locals in the concessions and government representatives directly overseeing the businesses, Kim noted. After the consultation period, a final bill will be tabled to the local legislature.

China has been clamping down on activity by VIP punters in Macao for several years now over concerns that the high-stakes betting there — which takes place in convertible Hong Kong dollars — can sometimes be an illicit channel for currency outflows and money laundering. Beijing has also cracked down on organized gambling trips to Macao and other overseas destinations organized by junkets, companies that service high-rollers and extend them credit, amid a wider effort to discourage casino gaming.

While China has been tightening its scrutiny over Macao’s gambling sector for years, Tuesday’s move comes as Beijing undertakes a widespread crackdown on business and society. Initially focused on the growing influence of China’s tech giants, the campaign has taken on a moralistic tone, targeting children’s video-game use to after-school tutoring. The Communist Party has long had a dim view of gambling, citing its impact on families and linking it to social disharmony.

Nonetheless, Chinese are avid gamblers, with the increased oversight of Macao pushing them to less regulated markets like the Philippines and Cambodia, where casinos and online gaming operations were flourishing before the pandemic halted travel.

Ader said it was unlikely a western operator like Sands would lose its license, although the overall climate for foreign companies in the country is deteriorating.

“It’s sort of all going in the wrong direction in China,” he said. “To the extent investors are nervous about China, Macao doesn’t feel like the place it was five years ago for a lot of reasons.”