China Oceanwide Struggles to Save U.S. Deals as Evergrande Sways 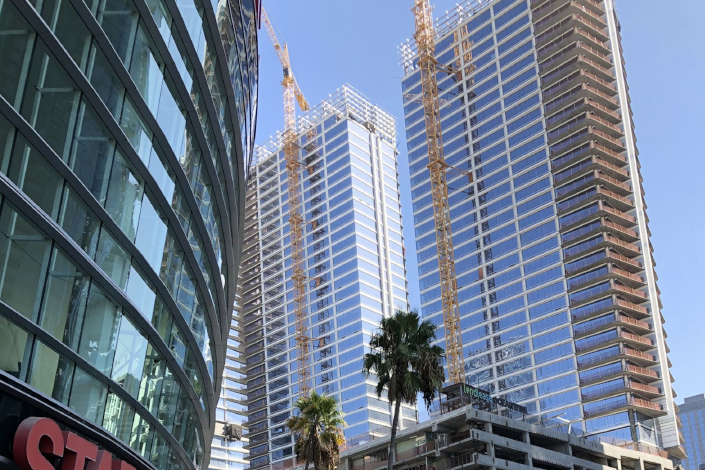 (Bloomberg) — As the financial world warily watches the fate of cash-strapped China Evergrande Group, another big Chinese property developer is facing a ticking clock too, tied to projects in Manhattan, Los Angeles and Hawaii.

China Oceanwide Holdings’ Hong Kong-based development subsidiary has been warning in regulatory filings this year that if it can’t complete plans to bolster its finances, such as restructuring debts and selling part of its portfolio, it might not be able to continue to “operate as a going concern.”

At the same time, another Oceanwide unit has paused work at a site in San Francisco, leaving a hole in the ground where it hoped to build the city’s second-tallest skyscraper. Altogether, Oceanwide has spent $3.5 billion on U.S. investments that are idle or nowhere near finished.

After a series of failed talks with potential partners, the company is trying to extend its loans and free up cash amid mounting tumult in China’s real estate scene. President Xi Jinping is cracking down on debt-fueled property speculation. In recent days, the world has been watching to see if his government — wielding a tight grip on lenders — lets Evergrande have a financial lifeline to quell protests from jilted customers and investors.

The outcome of that awkwardly timed drama could influence the willingness of investors and lenders to help Oceanwide salvage projects and avoid potential damage to key U.S. property markets.

His group is concerned about Oceanwide’s unfinished work on a cluster of apartment towers and a hotel adjacent to the Staples Center sports arena. Construction cranes stand idle above the site like hands of broken clocks — an eyesore in a downtown area that, like many central business districts, is struggling to rebound from the Covid-19 pandemic.

Companies don’t raise “going concern” risks lightly, in part because it can drive up borrowing costs, hurt efforts to raise capital or weaken negotiating positions when trying to sell assets or recruit partners. The China Oceanwide Holdings Ltd. subsidiary began including an expanded “going concern” passage in its semi-annual reports in March. It laid out steps, deals and other measures it planned to take to ensure it would continue meeting obligations.

Subsequent filings this year describe how some attempts to resolve the situation have fizzled, forcing it to continue working on solutions.

A deal reached in March to sell properties on Oahu in Hawaii, where the developer plans an 800-room Atlantis-brand resort, ultimately fell apart because Oceanwide “could not agree to the legal structure and consideration,” the company reported. A $900 million refinancing plan for the Los Angeles project collapsed in June after due diligence.

But among measures of comfort, the unit said it’s made arrangements for time to work out deals.

Part of the parent company has pledged to meet all of the subsidiary’s financial obligations through next August, including HK$5.2 billion ($670 million) in an undrawn credit facility, according to the Sept. 13 filing. The unit also is in talks with creditors to restructure its debts and has received interest from a potential buyer for more than 17 acres (69,000 square meters) of land it owns in Oahu, potentially freeing up cash, the filing shows.

Meanwhile, the business is pursuing other deals — working with commercial real estate services company Jones Lang LaSalle Inc., for example, as it explores options for the Los Angeles project.

“We’re discussing different forms of cooperation with multiple potential parties, including for new fundraising,” a company representative in Beijing said in a written statement. Oceanwide is seeking to offload its main office complex in Beijing and has discussed a potential price of about $3.1 billion, Bloomberg reported this month.

Xi and other government officials have railed against the excesses of speculators. And over the years, China has cracked down on domestic firms such as Anbang Insurance Co. and Dalian Wanda Group Co. that pursued big investments in the U.S.

With officials’ frustrations back in the headlines this month, Wall Street giant Blackstone Inc. broke off a $3 billion takeover of Soho China Ltd. The Beijing-based office park developer said it was unable to satisfy unspecified “preconditions” of the deal.

Founded in 1985 by Lu Zhiqiang, Oceanwide started as a property developer and grew into one of China’s largest conglomerates, with investments in banking, insurance, energy, media and technology. Over the past decade, it joined the rush of Chinese investors pouring more than $235 billion into overseas acquisitions, ranging from trophy hotels to Hollywood film studios.

Oceanwide agreed to buy the Los Angeles site in 2013 before pursuing deals in San Francisco, New York and Hawaii over the next three years. In 2018, the Chinese government imposed offshore capital controls to help stabilize its currency, choking off some funding.

The San Francisco project — a two-tower hotel, office and residential development — is also stalled. The company’s $1.3 billion investment has left a gaping hole in the ground near First and Mission streets. Oceanwide said last December that it scrapped a $1.2 billion sale of the project because the pandemic had impeded due diligence.

On Manhattan’s Lower East Side, Oceanwide has set out plans for a 113-floor skyscraper, but a 1950s brick building still stands on the land at 80 South St. — five years and $409 million into the effort. In May, Oceanwide paid $6 million to extend a $169 million loan through November, according to city property records. The company remains current on the payments, according to DW Partners Chief Executive Officer David Warren, who made the loan. He declined to comment further.

“Based on the assets they hold, I see why they’re facing difficult headwinds,” said Alex Foshay, head of the international capital markets division for brokerage Newmark Group Inc. “Investors are having a hard time having an optimistic view of where they’re going to be in the next couple of years.”

“We’re looking at these as potential opportunities,” said Alfonso Munk, chief investment officer of Houston-based Hines. “These are the types of projects in the future that we have the expertise for. The key is accessing them at the right cost basis.”

As much as a price, the question is what stake, if any, Oceanwide can retain amid potential discomfort working with a Chinese firm amid so much political uncertainty.

“It’s almost entirely a matter of getting the deal terms to the right place,” said Griffin, the Los Angeles business promoter.

The Los Angeles project faces $366 million of liens from unpaid contractors, according to the most recent Oceanwide filing. Chinese investors who helped raise $325 million in exchange for U.S. green cards, sued after the U.S. government withheld their visas during the project’s construction shutdown. The case is ongoing.

“You’d think that they’d not want to bleed out and continue losing money on these projects,” said Stephen Cheung, chief operating officer of the Los Angeles Development Corp. “It’s really a black eye on the region.”