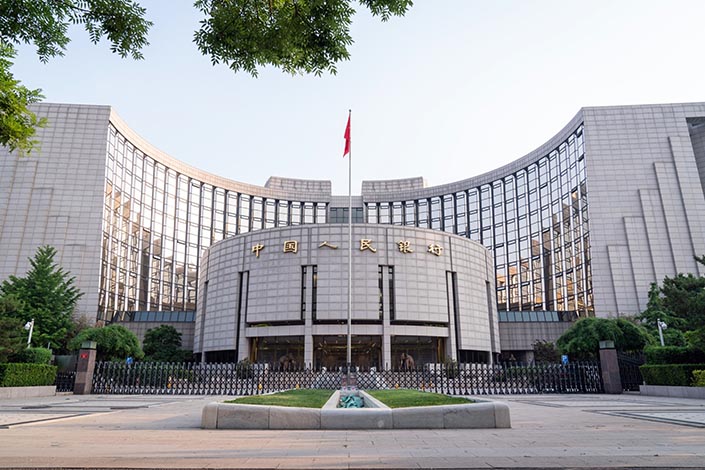 The People’s Bank of China’s headquarters building in Beijing on May 19. Photo: Bloomberg

The People’s Bank of China (PBOC) pumped in 110 billion yuan ($17 billion) of cash with seven- and 14-day reverse repurchase agreements. That was the largest addition through open-market operations since late January, when a funding squeeze sent interbank rates soaring. Prior to Thursday, the PBOC had injected liquidity for three straight sessions, stoking bets that Beijing hopes to soothe market nerves over Evergrande.

The need to help calm market jitters is pressing, as concerns over Evergrande’s ability to make good on its liabilities spills over into global markets. Focus is on whether the developer can pay $83.5 million of interest due Thursday on a five-year dollar note. The coupon on the security, which has a 30-day grace period before a missed payment would constitute a default, is part of $669 million of bond interest due through the end of this year.

The indebted developer’s Hong Kong-listed shares jumped as much as 32%, the most since 2009, in early trading Thursday on bets the company would avoid a disorderly debt resolution after one of its units negotiated interest payments on yuan bonds.

Apart from attempting to ease market concerns over Evergrande, authorities also tend to loosen their grip on liquidity toward quarter-end due to increased demand for cash from banks for regulatory checks. Lenders also need to hoard more funds ahead of the one-week holiday at the start of October.