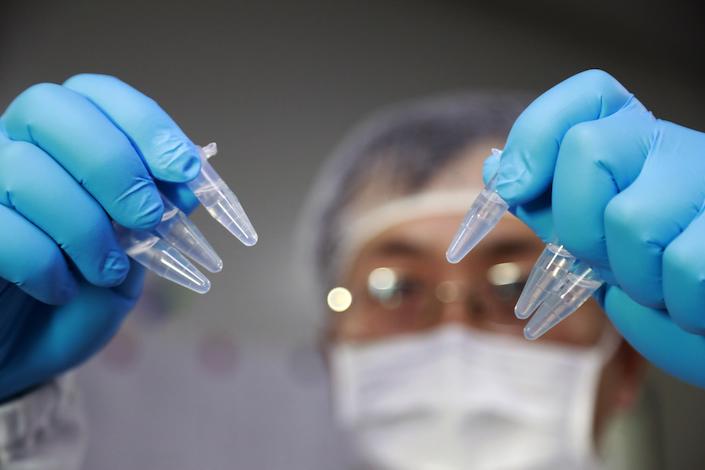 Inactivated-virus vaccines made by Beijing-based Sinovac Biotech Ltd. and state-owned Sinopharm are among the most used in China

(Bloomberg) — A vaccine developed by Sichuan Clover Biopharmaceuticals Inc. was found to prevent 79% of Covid-19 cases of any severity caused by the delta variant in late-stage trials, making it the first Chinese shot to offer clear efficacy data against the variant causing resurgent waves of infections around the world.

The Clover candidate deploys protein on the coronavirus to stimulate immunity against Covid, an approach also used by the inoculation developed by Novavax Inc. It is 100% effective against severe Covid caused by any variants detected in the trial, including delta, gamma and mu, which first emerged from India, Brazil and Colombia respectively.

The shot prevented 67% of Covid of any severity caused by any strain, the company based in the western Chinese city of Chengdu said Wednesday in a press release.

The efficacy data was based on a total of 207 cases of symptomatic Covid two weeks after participants received the second dose of either the experimental shot or a placebo. Genetic sequencing was conducted in 146 of the cases, with the delta, mu and gamma variants accounting for nearly three-quarters of them. The trial enrolled more than 30,000 adults and elderly across the Philippines, Brazil, Columbia, South Africa and Belgium, according to the company’s statement.

The shot, given in two doses at a three-week interval, is the first Chinese inoculation to demonstrate definitive evidence of its potency against predominant variants around the world.

Inactivated-virus vaccines made by Beijing-based Sinovac Biotech Ltd. and state-owned Sinopharm are among the most used in China and other parts of the world. They and have efficacy rates ranging from 50% to 80% in preventing symptomatic Covid. Sinovac and Sinopharm have provided little conclusive data on the effectiveness of their shots against the delta variant, which is more infectious than the virus’s original strain and which appeared to have dimmed the protection of existing vaccines.

Chinese vaccine maker Chongqing Zhifei Biological Products Co. said in August that its Covid vaccine — which is similar to the Clover candidate but requires three doses — was found to be almost 78% effective against delta and 92.93% effective against the alpha variant, though it didn’t specify whether the figures were for serious illness or all symptomatic infections.

Clover’s shot was developed with $328 million in funding from the Coalition for Epidemic Preparedness Innovations, which also backed the development of the AstraZeneca and Moderna Covid vaccines. Clover signed an agreement with vaccine alliance Gavi to supply as many as 414 million doses to Covax, a program backed by the World Health Organization to ensure access to shots for the world’s poorest nations.

The company seeks to apply for approval of the vaccine with regulators in China and the European Union and from the World Health Organization in the fourth quarter this year and expects to roll out the shot by the end of the year, it said in the statement.