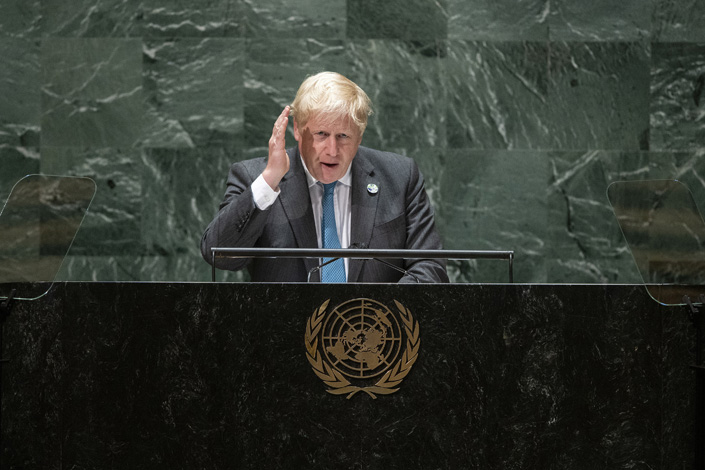 At their recent meeting in Tianjin, China’s special envoy on climate Xie Zhenhua and the U.K.’s President of the upcoming U.N. Climate Change Conference (COP26), reportedly held “candid, in-depth and constructive” talks regarding arrangements for the meeting, and cooperation on climate change between the two nations.

A constructive and in-depth approach is certainly needed. COP26, being held in Glasgow in November, offers an opportunity for leaders to act together to avert the worst impacts of global warming. The U.K. and China have pivotal roles to play. The U.K. is co-hosting the conference with Italy, so is responsible for setting the bar high and doing the diplomatic work in the run up necessary to ensure success. The U.K. also has to demonstrate it has plans in place to meet its own ambitious emissions reduction goal. And China, as a global superpower and a major emitter of greenhouse gasses, could set an example to other emerging economies of enhanced ambition and commensurate action to speed up the transition to a low carbon future.

New research from Chatham House shows that without much greater emissions reductions from all countries — but especially major emitters — severe and life-changing climate impacts will be locked in for 2030 and beyond. Warnings about the dire impact of climate change for the future of our planet are not new. “Code red for humanity” was the headline from the latest Intergovernmental Panel on Climate Change report, authored by the world’s leading scientists and backed by governments. But extreme weather-related events that pose an existential threat to people across the world are occurring with increasing frequency and severity.

This year alone, record-breaking floods have ravaged China, Germany, Belgium and Bangladesh, deadly wildfires have ripped through Australia, Siberia, the U.S. and Turkey, and heatwaves have claimed lives in southern Africa, southern Europe and central and western U.S. According to the U.N. World Meteorological Organization, weather disasters are striking four to five times more often and causing seven times more damage than in the 1970s. Climate change is here and it is set to get worse.

The current pace of global decarbonisation efforts put the world on track for at least 2.7 degrees Celsius of warming by 2100, which would have devastating consequences. Without a radical change to the status quo, by the 2030s, 400 million people a year are likely to experience heat so extreme that they are unable to work outside; the number of people exposed to temperatures so hot that they are life-threatening is likely to surpass 10 million a year; and by 2040, some 3.9 billion people will probably experience major heatwaves annually, 12 times the historic average.

By 2040, almost 700 million people each year are likely to be exposed to droughts of at least six months’ duration, nearly double the global historic annual average. No region will be spared, but East and South Asia will be worst-hit — with, respectively, 125 million and 105 million people a year likely to be affected.

When it comes to food and the world’s ability to feed a rapidly growing global population, the scale of the crisis is evident. Food production will need to increase by 50% by 2050. But without rapid and sizeable emissions reductions, agricultural yields are set to decline by 30% by the same date. By the 2040s, the probability of a 10% yield loss, or greater, within the top four maize producing countries — the U.S., China, Brazil and Argentina — rises to between 40% and 70%.

Beyond the quantifiable risks, there is the growing possibility that climate-related events could trigger a sequence of connected incidents across regions and sectors. A total of 70 experts convened by Chatham House agreed these cascading risks could drive higher mortality rates, trade disruption, food insecurity, increased migration flows, a rise in infectious diseases and even armed conflict. With each point of a degree increase in global temperatures, there is a growing likelihood that these incidents compound one another and combine to create a negative feedback loop where each incident further amplifies the effects of the others.

Soberingly, this is not even the worst-case scenario. Climate scientists have long since identified the prospect of tipping points, whereby abrupt changes occur as a critical earth system threshold is passed, such as the disintegration of the Greenland and West Antarctic ice sheet. There is now growing concern that current models may underestimate their potential influence.

To avert catastrophe, all governments will have to do more. Climate Action Tracker’s latest analysis rates just a single country — Gambia — as having overall climate action that is consistent with the target of limiting warming to 1.5 degrees above pre-industrial levels, a target agreed by governments at the U.N. climate meeting in Paris in 20215. While some countries have submitted revised plans — known as “National Determined Contributions” — ahead of COP26 that move in the right direction, the actions of the majority, including many of the highest emitters, are highly insufficient.

Australia, Indonesia and Brazil — all hugely exposed to climate risk — have said they won’t improve on the pledges they made in Paris in 2015. Meanwhile, India and China are yet to submit their new proposals. Collectively, there is still a yawning gap between where we are and where we need to be, and each moment of delay puts the 1.5 degree target further out of research. The coming weeks will be critical for the future of our planet and life on it. There is no time to lose.