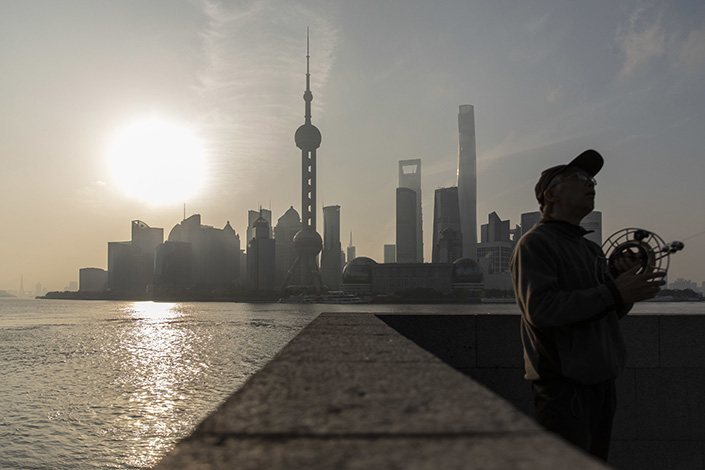 A man flies a kite on the Bund against the backdrop of the Lujiazui Financial District in Shanghai on April 10. Photo: Bloomberg

(Bloomberg) — Chinese authorities are kicking off an inspection of the nation’s financial regulators, biggest state-run banks, insurers and bad-debt managers for the first time in six years as Beijing steps up efforts to root out corruption in the $54 trillion financial system.

CBIRC Chairman Guo Shuqing said the move is a reflection of the Communist Party’s focus on financial regulation and told his staff that cooperation with inspectors will be their top priority at the moment.

The banking regulator is among the 25 financial organizations being scrutinized in the eighth round of checks by the ruling Communist Party. While previous tours covered other central and local government agencies and state-owned companies, the latest zeros in on entities including the People’s Bank of China, the China Securities Regulatory Commission, the Shanghai and Shenzhen stock exchanges, the biggest state-owned banks, as well as bad-debt managers including China Huarong Asset Management Co. Ltd.

The move underscores the party’s increasingly tough stance on corruption among cadres and corporate executives. More than 1.5 million government officials have been punished in the years-long campaign, most recently including the execution of Lai Xiaomin, the former chairman of Huarong, and life imprisonment of Hu Huaibang, the former chairman of the nation’s biggest policy bank.

It also comes as authorities are cracking down on everything from fintech platforms to property developers to limit financial risks. Global investors have been unnerved by the regulatory onslaught from Beijing targeting its biggest technology companies and other industries as well as a push by President Xi Jinping to create “common prosperity,” a campaign to narrow the wealth divide.

The inspectors will focus on checking for gaps in political awareness among the party leaders of the organizations and problems that hinder the high-quality development of the financial industry, according to a report in the official People’s Daily announcing the upcoming inspections last month that cited Zhao Leji, head of the CCDI.

In previous inspections since 2017, Beijing has sent teams to the education regulator and top universities, local governments, propaganda and cyberspace watchdogs and the biggest state-owned enterprises and other government departments.

The last inspection on the financial sector was in late 2015 when the CCDI focused on 21 entities. That check didn’t include the four bad-loan managers. The inspections often lead to rectification of breaches and sometimes further probes into suspicious dealings and officials.