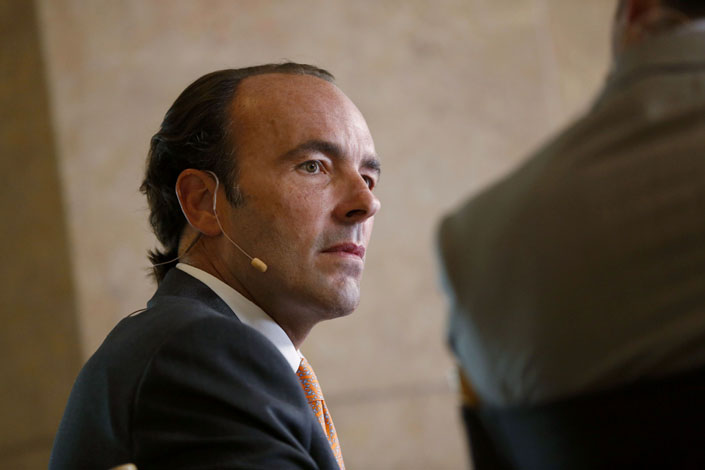 (Bloomberg) — A recent U.S. Securities and Exchange Commission (SEC) case reveals how Kyle Bass’s bet against the Hong Kong dollar has fizzled: He’s lost big, ensnaring some investors who funded his short through what the regulator says was an illicit stock offering.

The details were laid out in a September SEC enforcement action that describes illegal financing of an ambitious startup that sought to expose corruption involving Chinese government officials. The startup — GTV Media Group, with ties to self-professed billionaire Guo Wengui and ex-Donald Trump adviser Steve Bannon — raised $339 million through an unregistered share sale last year, according to the SEC.

In June 2020, GTV’s parent company — Saraca Media Group — transferred $100 million of the proceeds to an unnamed hedge fund that takes positions in the Hong Kong dollar and other Asian currencies, the regulator said. The fund went on to lose more than 95% of the $30 million it invested, according to the SEC. That hedge fund is managed by Bass’s Hayman Capital Management, said two people with direct knowledge of the matter.

Bass, 52, had been bearish on Hong Kong’s currency since at least 2019. At the time of the GTV share sale, Hayman was starting a new strategy to make all-or-nothing wagers that the currency’s peg to the U.S. dollar would collapse, Bloomberg has previously reported. The SEC, which said its investigation is continuing, hasn’t accused Bass or Hayman of wrongdoing.

Hayman doesn’t comment on its investors or its funds, Jeff Tillotson, a lawyer representing Bass and the company said in a statement. He added that GTV has never invested in Hayman and that neither Hayman nor Bass has ever received compensation from the media firm. Tillotson also said information that Bloomberg planned to report was inaccurate. The SEC declined to comment.

Hayman’s investment shows the risks of making big wagers based on geopolitics. It also raises questions about potential conflicts between hedge funds and their clients, said Richard Painter, a former White House ethics official who teaches securities law at the University of Minnesota.

An April 2020 memo describing the GTV stock sale names Bass as a nonexecutive director of the company, along with Bannon and others, according to a copy of the offering document that was included as part of an ongoing lawsuit that investors filed against Guo. Bass also served as the chairman of a nonprofit that Guo founded, according to a document filed with the Internal Revenue Service. In a tweet posted last year, Bass said he was “not a Director of GTV as of July 9th.”

Bass wasn’t a GTV board member between April and June 2020, didn’t authorize the use of his name in any marketing materials and had no knowledge of GTV’s fundraising methods, Tillotson said.

“The issuer of the securities shouldn’t be taking the proceeds of the offering and turning them over to a hedge fund,” Painter said. “How was that approved? Who approved that? Did they tell the investors that that’s what’s going to happen to their money?”

The SEC’s case involved a tangled web of companies, all with links to Guo, a vocal critic of the Communist Party of China who fled to the U.S. in 2015.

The agency accused GTV, Saraca and Voice of Guo Media of selling unregistered stock and digital tokens to thousands of investors to fund a venture that would be “the only uncensored and independent bridge between China and the Western world.”

GTV is owned by Saraca, while Voice of Guo Media provides support work to both companies, including translation services, the SEC said. Most of the money from the share sale was ultimately held by Saraca, according to the regulator.

In a settlement announced last month, the companies agreed to pay more than $539 million, the bulk of which was money that has to be returned to investors. The companies didn’t admit or deny wrongdoing. Guo and Bannon weren’t named in the SEC’s order and the regulator didn’t accuse them of any misconduct.

Among the SEC’s claims were that some “unaccredited investors” bought shares in GTV, meaning they likely weren’t eligible to have their money put in a hedge fund. Several investors who participated in the GTV stock offering have filed lawsuits against Guo and the companies named in the SEC’s case.

Bass has long been a China skeptic, a view that he’s frequently shared on Twitter and in media interviews. He made one of his most audacious bets on the region last year, lining up investors for the Hayman Hong Kong Opportunities Fund, LP-Prodigious Series. The fund planned to use options to leverage its assets by 200 times to speculate on declines in Hong Kong’s dollar, according to a marketing presentation seen by Bloomberg.

As the fund was being pitched to investors in May 2020, the coronavirus pandemic was triggering economic instability and protests were raging in the streets of Hong Kong. In July of last year, Bloomberg reported that some White House advisers were urging Trump to undermine the Hong Kong dollar peg in an effort to punish China. But Trump never took action on the decades’ old peg and it remains in place. Over the past 18 months, the Hong Kong dollar has slipped just 0.4%, trading well within the band against the U.S. currency.

In a November video posted online, Guo himself said Bass received $100 million from Saraca. The money was used to short the Hong Kong dollar with 200 times leverage, according to Guo. The hedge fund’s significant losses were triggered by the media declaring Joe Biden the winner of the U.S. presidential election, Guo said.

Bass is best known for his prescient bet against subprime mortgages before the 2008 financial crisis. Since then, his performance has been less stellar and Hayman’s assets under management have declined. The firm oversaw $304 million at the end of last year, a March SEC filing shows. In 2014, Hayman managed $2.3 billion, according to the Wall Street Journal. Bass closed out a nearly four-year short of the yuan in 2019, saying his work against China was moving “more into the political sphere than the financial sphere.”

He’s appeared in anti-China videos with Bannon and Guo, who also goes by the name Miles Kwok or Miles Guo. In 2019, Bass was listed as chairman of the Rule of Law Foundation, a nonprofit organization founded by Guo that claims to expose corruption in China and protect individuals who speak out against it.

The close ties between Guo and Bannon were highlighted in August 2020 when federal prosecutors charged the former Trump adviser with conspiring to siphon funds from a campaign to build a wall along the U.S.’s southern border. Bannon, who Trump later pardoned, was arrested on Guo’s yacht off the coast of Connecticut.

The GTV stock offering described the company as a TikTok-style video-streaming firm focused on “revealing the truth about China.” GTV sought to line up investors by targeting disaffected Chinese in the U.S. and abroad. Company agents made videos — some of which were uploaded to YouTube — advising how to purchase stock in the company, according to the SEC.

The offering document makes no mention of a hedge fund or that proceeds would be invested in shorting the Hong Kong dollar. Rather, it says that almost 90% would be used to acquire other companies, purchase technology and for marketing.