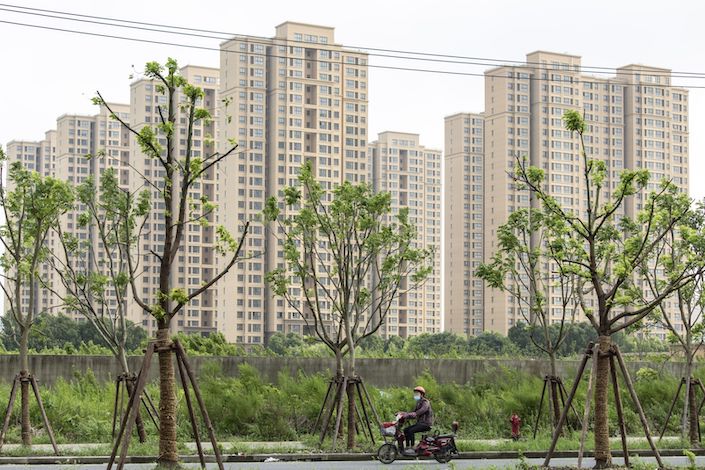 (Bloomberg) — China’s property and construction industries contracted in the third quarter for the first time since the start of the pandemic, reflecting the chill rippling through real estate from the Evergrande debt crisis and tight government curbs on credit.

Economic contributions from the real-estate industry, a mainstay of the economy as its activities support sectors from furniture to commodities, shrank 1.6% from a year ago, according to a supplemental report on gross domestic product released Tuesday by the National Bureau of Statistics. The sector grew 7.1% in the three months through June, and the contraction is the first since the first quarter of 2020 when the Covid-19 pandemic broke out.

The construction industry’s output fell 1.8%, also the first decline since the pandemic. Before the coronavirus outbreak, that sector had never contracted in data going back to 1992.

The escalating debt crisis at China Evergrande Group and other developers has undermined consumers’ confidence in buying homes and exacerbated the effect of tight curbs on property developers’ financing and property sale restrictions to cap prices. The combined sales of China’s top 100 developers plummeted 36% year-on-year in September, and the slow pace of government-funded infrastructure construction also undercut the building sectors.

China’s economy slowed further in the third quarter, weighed down by the housing slump and electricity shortages, according to data released Monday. Gross domestic product expanded 4.9% from a year earlier, down from 7.9% in the previous quarter. Growth of investment and industrial production was sluggish, while retail sales rebounded slightly.

Production halts at factories across the country due to a power shortage are reflected in the slowdown of the manufacturing industry, which expanded by 4.6% in the third quarter, down from 9.2% in the previous quarter.

Separately, the government warned Tuesday of downward pressure on the industrial economy, and an official observed that growth in the current three-month period will pale by comparison with the strong expansion a year ago.

This week’s weak data prompted many economists to downgrade growth forecasts for the rest of the year. Officials have signaled they are not rushing to stimulate the economy but will provide targeted support.

People’s Bank of China Governor Yi Gang recently forecast the economy would expand about 8% this year, exceeding Beijing’s official target of more than 6%.