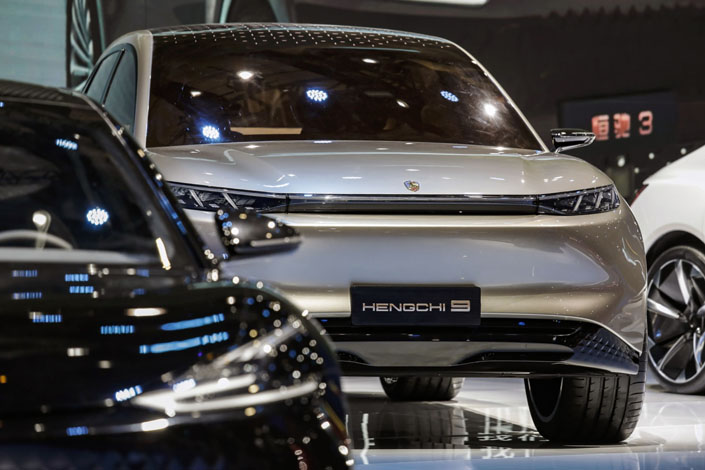 (Bloomberg) — China Evergrande Group’s electric-vehicle unit jumped in Hong Kong trading after the chairman of the indebted property giant said making such cars would become its main business within a decade.

Shares of China Evergrande New Energy Vehicle Group Ltd. climbed as much as 17% on Monday morning, the most in three weeks. Evergrande rose 6% before paring the gain to 1.9% as of 10:38 a.m. local time. The Securities Times reported Friday that Evergrande Chairman Hui Ka Yan said he plans to scale down real estate operations to focus on new-energy vehicles (NEV).

The reported shift to the electric car business will be a challenge given that Evergrande has yet to deliver a single vehicle, despite Hui’s ambitions to take on industry giants such as Tesla Inc. The world’s most indebted developer is struggling with a cash crisis that has led it to consider selling stakes in units including Evergrande NEV.

Evergrande NEV is still trading about 94% off its peak in February. The company last month warned of a “serious shortage of funds” and said there was no guarantee it could meet financial obligations. The liquidity shortage meant it stopped paying some operating expenses and some of its suppliers turned away.

The company’s first electric car — “Hengchi” — will be delivered from its Tianjin factory at the start of next year, according to an Oct. 11 statement on Evergrande’s website, which also referred to a “three-month war” to tackle the main challenges in EVs.

In principle, Evergrande would not buy any land over the next 10 years, Hui said at an internal meeting, according to the Securities Times report. Annual sales of real estate will drop to about 200 billion yuan ($31 billion) in 10 years from 700 billion yuan in 2020, he was quoted as saying. Evergrande declined to comment.

Evergrande said construction at more than 40 projects in Guangdong province is proceeding smoothly and the homes will be delivered. The developer pulled back from the brink of default last week, paying an $83.5 million bond coupon just before the deadline.

The assurance on the projects “is a sign it seeks to ease investors’ frayed nerves,”

Bloomberg Intelligence analyst Lisa Zhou said. “Liquidity woes still loom, which it may address by disposing of its investment properties and listed shares of subsidiaries, despite plans to scale back its real estate operations by taking a 10-year break from land buying.”