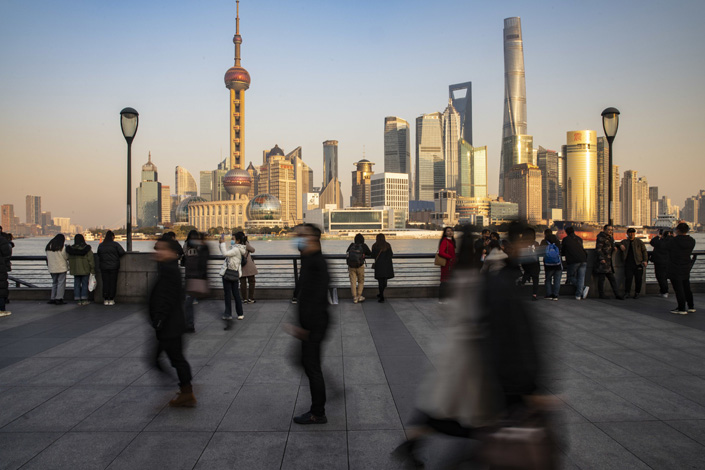 People walk on the Bund in Shanghai on Dec. 21. Photo: Bloomberg

(Bloomberg) — Being bullish on Chinese financial markets is becoming consensus weeks after a brutal quarter that saw the nation’s assets become almost untouchable.

This month alone, brokerages including HSBC Holdings Plc, Nomura Holdings Inc. and UBS Group AG turned positive on Chinese stocks, citing reasons including cheap valuations and receding fear of regulation from Beijing. Asset managers BlackRock Inc. and Fidelity International Ltd. are buyers, while Morgan Stanley recommended owning the nation’s speculative-grade debt because prices had fallen too far. Betting on a strengthening yuan is a no-brainer to many currency analysts.

That everyone should turn upbeat at a time when China’s economy is slowing, credit defaults are picking up and tensions with the U.S. remain volatile shows the disconnect between market sentiment and increasing risks. Growing optimism is no shield against losses — as seen earlier this year when stock analysts were the most bullish in a decade and tech was so popular that Tencent Holdings Ltd. was briefly worth nearly $1 trillion.

The rationale for investors right now is that things can’t get much worse — or that markets are as cheap as they can be. They’re betting prices already reflect a slowdown in the property market, weaker growth and President Xi Jinping’s campaign to shake up private enterprise.

The rebound in October is giving them confidence. Stock gauges are heading for their best month since January. Chinese junk bonds last week surged the most in 18 months. The yuan is near the strongest in five years against a basket of trading partners.

“Sentiment has largely taken a bigger knock than fundamentals,” wrote Fidelity portfolio manager Dale Nicholls on Oct. 6, one of the first global investors to publicly favor Chinese assets. “Investment is all about risk-reward and for many names, this is looking favorable after recent moves.”

Investors got a reminder of how quickly sentiment can turn on Wednesday, when tensions flared between China and the U.S. The Hang Seng China Enterprises Index slumped as much as 2.1% after U.S. Secretary of State Anthony Blinken called for Taiwan to have a greater role at the United Nations and U.S. regulators banned China Telecom Corp.’s American operations.

There are plenty of other risks. Unlike the rest of the world, China is sticking with plans to eliminate local transmission of Covid-19, even as it battles with sporadic outbreaks. The economy is showing signs of a further slowdown with car and housing sales dropping this month, and a number of economists have lowered their growth forecasts for this year and next.

China is reluctant to stimulate the economy because of a determination to deleverage the housing market and reduce financial risk. The policy has exacerbated the crisis at China Evergrande Group and other indebted developers, with at least four missing dollar debt payments this month. Distressed property firms, which make up about one-third of China’s record dollar bond defaults this year, face a bigger test in January — when maturities more than double from October, according to Citigroup Inc.

“Our view on China has not changed,” Garnry said. “It is not cheap given the risks in the housing market, debt markets, and changing supply chains. China’s zero covid policy will also continue to create roadblocks for the economy. Plus China’s “common prosperity” will create more distribution, equality, and a less-positive climate for publicly listed companies.”

It’s “too early to return to China” for equity investors, according to Credit Suisse Group AG analysts, who are sticking with their underweight recommendation.

There’s no doubt it’s been a bad year for Chinese stocks and credit. The MSCI China Index plunged 18% in the third quarter, its biggest underperformance versus the world in 20 years. Xi’s shock moves to take greater control over swathes of the private sector prompted concern that the nation’s stocks would be “uninvestable.” Cathie Wood, founder and chief executive officer of ARK Investment Management, warned that Chinese markets would be under pressure from a valuation perspective for “a long time.” Billionaire George Soros advised investors against bargain hunting in Chinese shares.

Panic turned so severe in the credit market that speculative-grade yields topped 20% and spreads over Treasuries widened to a record — levels that made little sense to Morgan Stanley credit analysts.

But with valuations this low, global funds are returning to China. The MSCI China index still trades at just 1.94 times book value, compared with a multiple of 3 for its global equivalent. The gap is near the widest on record. Investors had turned “too bearish,” wrote HSBC Holdings Plc strategists in a note Tuesday.

Buying Chinese assets after such heavy losses can be a winning strategy, as it was for those who did so early last year. The country’s stocks and currency, which had tumbled weeks before the pandemic shocked markets elsewhere, went on to outperform much of the world in 2020. But bulls will likely need strong nerves to hold the course in a market that repeatedly shocked global investors this year.

“Reversal trading can conclude what we have observed in October,” Gilbert Wong, Morgan Stanley’s head of Asia quantitative research, wrote in an email Wednesday. “We remind investors again that this rally might prove short lived.”