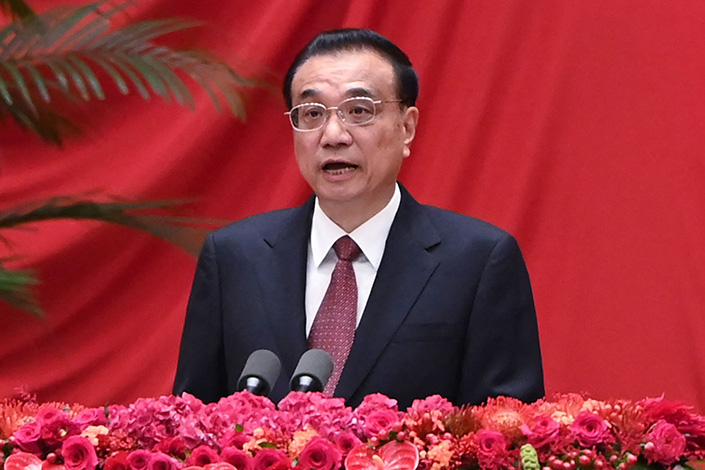 Premier Li Keqiang speaks at a reception at the Great Hall of the People in Beijing on Sept. 30. Photo: Bloomberg

(Bloomberg) — China’s economy faces new downward pressures and has to cut taxes and fees to address the problems faced by small and midsize companies, according to Premier Li Keqiang.

Li did not specify the extent of the new “downward pressure” or its cause, but the phrase is generally used by Chinese officials to refer to a slowing economy. He has used the phrase before, including several times in 2019.

The economy needs “cross-cyclical adjustments” to continue in a proper range, Li said during a visit to China’s top market regulator, state broadcaster CCTV reported. That phrase is associated with a more conservative fiscal and monetary approach that focuses more on the long-term outlook instead of immediate economic performance.

China’s economy has been slowing in recent months due to Beijing’s push to slow growth in the real estate sector. Li’s remarks came after further signs of weakness in October due to power shortages that weighed on manufacturing, and strict coronavirus controls that put a brake on holiday spending.

“There are no obvious growth drivers now, so the government is looking for one,” said Bruce Pang, head of macro and strategy research at China Renaissance Securities Hong Kong Ltd. “Small businesses’ investment can provide a source of healthier, longer-term growth, compared with government or property investment.”

Authorities will encourage banks to lend more to small businesses, further reduce taxes and fees for them, and look to simplify administrative procedures to encourage more entrepreneurs, Pang said.

The official manufacturing purchasing managers’ index fell to 49.2, the National Bureau of Statistics said Sunday, the second month it was below the key 50-mark that signals a contraction in production.

Several investment banks have lowered their forecasts for China’s 2021 growth to below 8% in recent weeks. However, former Chinese central bank adviser Huang Yiping told Bloomberg News Tuesday that while China’s economy will slow further over the next few months, annual growth of around 8% is achievable.

Li called for the creation of a better business environment through equal treatment of all types of companies and better market oversight, mentioning efforts to combat monopolies, unfair competition and hoarding.

A statement from China’s government urging local authorities to ensure there was adequate food supply during the winter and encouraging people to stock up on some essentials prompted concerned talk online Tuesday, with the Ministry of Commerce later trying to calm concerns.