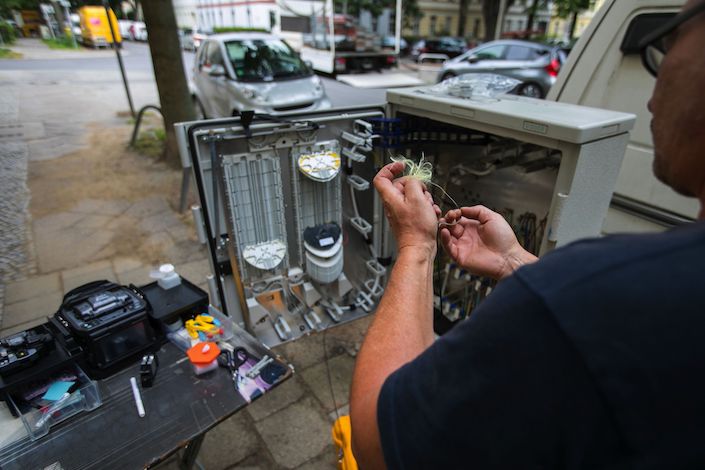 (Bloomberg) — The European Union imposed tariffs of as much as 44% on optical-fiber cables from China, affecting the supply of next-generation telecommunications equipment used by Deutsche Telekom AG and others.

Chinese exporters of core broadband gear for future 5G networks will face EU tariffs to counter unfair price undercutting known as dumping, according to an EU legal document published Wednesday on the authority’s website. Regulators said below-cost pricing risked driving EU producers out of the European market, and there were plenty of alternative suppliers in Europe and elsewhere to replace the Chinese goods.

The tariffs will go into force the day after the document is published in the EU’s Official Journal. They include a 44% duty on EU imports from companies the EU says are controlled by the Chinese state: FiberHome Telecommunication Technologies Co. Ltd. and Nanjing Wasin Fujikura Optical Communication Ltd.

The EU probe of optical-fiber cables imported from China stems from a dumping complaint by Europacable, an association that represents European producers including Prysmian SpA, Nexans SA and Leoni AG. The industry previously sounded an alarm that Chinese imports jumped 150% between 2016 and 2019, taking 15% of the 1 billion euro ($1.1 billion) a year EU market.

The European Commission said “it was inevitable that anti-dumping duties would have cost implications” for companies that bought cables from China but added that “this was due to the unfair export behavior” of suppliers and that cables accounted for only a minor share of the total roll-out cost of digital networks, less than 5% for 5G networks. Deutsche Telekom and Spanish distributor Comercial Electro Industrial SA opposed the tariffs, the EU said.