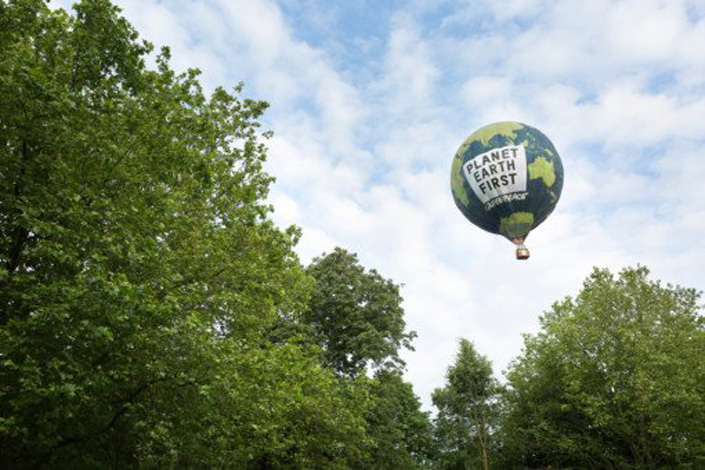 China’s commitment to a green and just transition might be just the kind of breeze needed for new types of legitimacy and growth to develop, among internet companies and beyond. Photo: Greenpeace

Now that the buzz from Glasgow’s UN Climate Conference has quieted down, with the global consensus to accelerate climate action confirmed, national governments have rolled up their sleeves and gone back to work. For policymakers pushing for a greener digital economy, December 2021 started off well.

On Dec. 8, China’s National Development and Reform Commission published an action plan for greener growth in the digital infrastructure sector — data centers and 5G — to contribute to the national carbon peak and neutrality goals. The plan focused on enhancing the energy efficiency of data centers and their utilization of solar and wind power. What’s more interesting is that this was not just technical guidance but was actually an integrated industry plan. New data centers are to be encouraged to “go West” for land and taxation support, where a synergy of new local demands for abundant renewable energy and greener data-related jobs can be created.

Around a week before this official policy release, GDS Holdings Ltd., the largest carrier-neutral data center operator in China — which controls roughly one-fifth of the domestic market — committed itself to carbon neutrality and powering its data centers with 100% renewable energy by 2030, according to its inaugural ESG report. This marks the third data center company committed to such a goal in China, the other two being Chindata Group Holdings Ltd. and Shanghai Athub Co. Ltd.. These first movers will undoubtably have the edge in policy preparedness and long-term planning.

Of course, one can argue that using renewable energy to power data centers might be the most straightforward part of greening the digital sector. Things get more blurred when it comes to the internet giants’ climate actions. Tech companies were quick to respond when China announced its carbon peak and neutrality goals in September 2020. Baidu Inc. and Ant Group Co. Ltd. both committed to carbon neutrality by 2030, and Tencent initiated carbon neutrality planning. However, the scope of these commitments has varied and the pathways to achieving them are still in the making. Indeed, there still seem to be many shades of green.

What suffices as green and low carbon enough? What should “peak carbon” and “carbon neutrality” encompass for a conglomerate woven into the social fabric as a new form of infrastructure? Besides data centers and cloud services that enable online marketplaces to guzzle electricity, should we also be talking about single-use packaging for the more than 60 billion deliveries sent around China each year, fleets of cargo vehicles mostly run on fossil fuels, and the 20,000 batteries used by all the electric bikes going around deliver orders. Of all the ways to reduce a company’s carbon footprint, what should be prioritized? How to make the most of real action and avoid green washing?

On Dec. 17, Chinese internet giant Alibaba Group Holding Ltd. announced the carbon neutrality target for the whole group on an operation level by 2030. Besides committing Alibaba Cloud to its 100% renewable goal by 2030, the company has provided an innovative answer to the question of scope. Anyone who has followed the recent ESG (environment, society and governance) jargon knows that the tricky part is dealing with both upstream and downstream emissions from the supply chain, know as Scope 3. For platforms like Alibaba, Scope 3 includes its own suppliers, such as logistics and packaging. Scope 3-plus goes beyond this and envelops the ecosystem in the shadow of the giant: millions of online retail operations and millions of consumer deals.

The current estimate of Alibaba’s Scope 1, 2 and 3 emissions add up to a bit less than 10 million tons annually. That may not sound like a lot compared to heavy industry. Of course, there are potentially significant emission sources missing from Alibaba’s Scope 3 calculation. However, this carbon neutrality plan made an attempt to activate previously untapped potential considering the gigantic commerce landscape of Alibaba.

It raises the bar and upgrades the rules for climate action taken by tech companies: 100% renewable energy for data centers and cloud services needs to be at the center of the emission reduction efforts first and foremost — exhausting options to cut back on emissions directly should always be the priority. Disclosure and reduction actions need to cover all operation parameters of internet companies as a minimum, before an extension of ambitions can take whole value chains into consideration. The final plus part carries the potential to catalyze profound positive changes in vast platform ecosystems that may contribute to China’s transformative low carbon growth, proportional to the internet giants’ social influence.

When everyone says “winter is coming for the internet sector” — with slowing growth and layoffs, the pressure of compliance, and social license being questioned — China’s commitment to a green and just transition might be just the kind of breeze needed for new types of legitimacy and growth to develop, among internet companies and beyond.

My organization, Greenpeace, has been in discussion with many companies, including the ones mentioned above, about these opportunities and definitions for scientific, measurable and actionable climate plans. We launched our own independent company climate action tracker covering a number of industries on Dec. 22. We are trying to use plain language without too much jargon with the aim of drawing attention to the real question, which is in a way also the elephant in the room: how to tell truly responsible and serious corporate climate commitments from vague and empty PR efforts, and schemes such as carbon book-cooking that make a mockery of our collective climate goals.

Comments and discussion of these points are welcome. Moreover, I look forward to seeing the ripples of impact triggered by big movers making progress in their genuine climate goals.