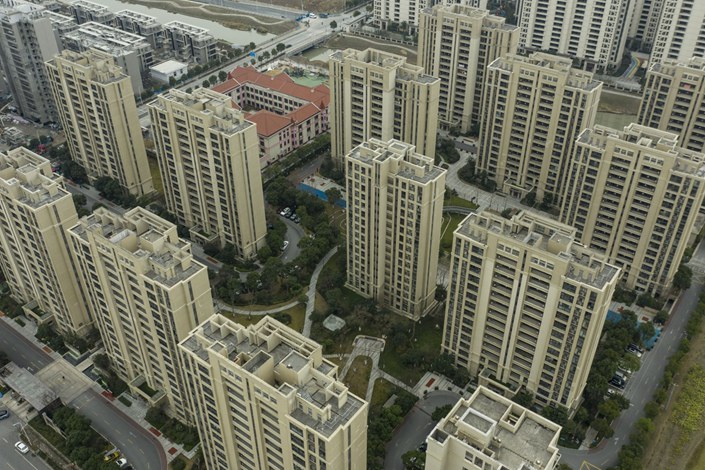 A Shimao-developed residential complex in Shanghai on Jan. 8. Photo: Bloomberg

(Bloomberg) — Bonds from China’s distressed developers are suffering some of their worst losses ever offshore, in contrast with relative calm in the local market where investors have had better luck getting repaid.

Examples of the divergence abound. Dollar notes of builders including Yuzhou Group Holdings Co. Ltd. and Shimao Group Holdings Ltd. have plunged, even as yuan bonds have fallen less or gained. Onshore holders have received coupon payments or sweetened offers on extension proposals while offshore payments go missed. A case also emerged recently that flagged risks whether money owed in a restructuring would be able to leave the country.

Chinese junk dollar bonds — the bulk of which come from developers — are in their worst losing streak on record, with a Bloomberg index going back to 2009 declining for an eighth straight month. A government crackdown on excessive leverage has led to record defaults, and sentiment has worsened amid an unprecedented slump in global debt markets stung by inflation. China’s local credit market isn’t immune, but it’s weathered the crisis better, amid support from domestic lenders that may provide lifelines for the long run.

“To minimize risks of disruptions to operations, onshore bond payments by the operating companies are being prioritized while timely payments to the offshore bond-issuing entities are not as critical for continued functioning,” said Wei Liang Chang, a strategist at DBS Bank Ltd.

One recent case that underscores the divergence between local and offshore markets came from a Beijing-based defaulted builder, China Fortune Land Development Co. Ltd. It recently made partial repayment to holders of onshore notes after a restructuring proposal was approved.

The company focused on domestic creditors in the early phase of its restructuring because most of its debt is onshore, Fortune Land told Bloomberg News. The builder said it will offer offshore debt claims the same resolution as onshore ones, and that it has reserved asset-sale proceeds for offshore creditors.

Meanwhile, some owners of a China Aoyuan Group Ltd. unit’s onshore note said in March they received an interest payment barely a month after the developer defaulted on dollar debt.

But there have been cases in which offshore creditors have fared well in comparison to onshore peers. Holders of a majority of Tewoo Group Co. Ltd.’s dollar bonds agreed in late 2019 to be immediately paid 37 to 67 cents on the dollar. It was 12 months later that the commodities firm proposed an onshore-debt restructuring plan in which large amounts of claims wouldn’t be payable in cash for at least five years.

As some troubled developers deal with domestic and foreign investors differently, market prices have responded accordingly.

All of Yuzhou’s offshore bonds are below 20 cents on the dollar, according to data compiled by Bloomberg. But its most active yuan note last traded above face value while more than doubling since the developer missed a dollar-bond interest payment last month. Debt from Sunac China Holdings Ltd.’s key mainland unit is significantly closer to par than the parent’s offshore notes.

Defaults again running at a record pace and recent debt exchanges have further dampened offshore investors’ appetite for Chinese issuers’ bonds. But others remain hopeful in the long run.

“Foreign investors could price in a wider risk premium for risky Chinese dollar bonds,” said DBS’ Chang, “But their interest may not fade given the size of the Chinese market and the diversification that it can offer.”