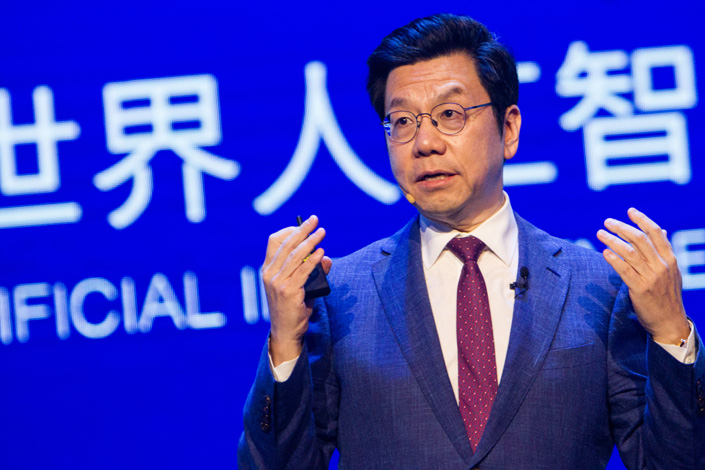 AI, like most technologies, is inherently neither good nor evil, writes Kai-Fu Lee, chairman and CEO of Sinovation Ventures. Photo: VCG

“Artificial intelligence (AI) is smart software and hardware capable of performing tasks that typically require human intelligence. AI is the elucidation of the human learning process, the quantification of the human thinking process, the explication of human behavior, and the understanding of what makes intelligence possible. It is mankind's final step in the journey to understanding ourselves, and I hope to take part in this new, but promising science.”

I wrote these words as a starry-eyed student applying to Carnegie Mellon University’s Ph.D. program almost 40 years ago. Computer scientist John McCarthy coined the term “artificial intelligence” even earlier — at the legendary Dartmouth Conference in the summer of 1956. In the first three and a half decades of my AI journey, AI as a field of inquiry was essentially confined to academia, with very few successful commercial adaptations.

AI’s practical applications once evolved slowly. In the last five years, however, AI has become the world’s hottest technology. A stunning turning point came in 2016, when AlphaGo, a machine built by Deepmind engineers, defeated Lee Sedol in a five-round Go match known as the Google DeepMind Challenge Match. Go is more complex than chess by 1-million-trillion- trillion-trillion-trillion times. Also, compared to chess, the game of Go is believe to require true intelligence, wisdom, and Zen-like intellectual refinement. People were shocked that the AI competitor was capable of beating the human champion.

AlphaGo, like most of the commercial breakthroughs in AI, was built on deep-learning, an omni-use technology that can learn automatically from large datasets. Deep learning was invented many years ago, but only recently has there been enough computing power to demonstrate their efficacy, and sufficient training data to achieve exceptional results. Compared to when I started working in AI 40 years ago, we now have about 1 trillion times more compute power to experiment with AI, and storing the necessary data is 15 million times cheaper.

AI is now at a tipping point. The days of slow progress are over. In just the past five years, AI has beaten human champions in Go, poker, and the video game Dota II. It has become so powerful that it can learn chess in four hours and play invincibly against humans. But it’s not just games. The technology has surpassed humans in speech and object recognition, powered “digital humans” with uncanny realism in both appearance and sound, and passed college entrance and medical licensing exams. It is outperforming judges in fair and consistent sentencing, and radiologists in diagnosing lung cancer, as well as powering drones that will change the future of delivery, agriculture and warfare. Finally, AI is enabling autonomous vehicles that are safer than people on highway driving.

As AI continues to advance and applications blossom, where does it all lead?

In my 2018 book, “AI Superpowers: China, Silicon Valley, and the New World Order,” I addressed the proliferation of data (or “new oil”) that powers AI and how the United States and China are leading the AI revolution, with the U.S. leading research advances and China building more applications for its large population using the corresponding big data. I also predicted new advances from big-data-driven decision-making to machine perception to autonomous robots and vehicles. I projected that AI’s new applications in digital industries, finance, retail and transportation would build unprecedented economic value, but also create problems around the loss of human jobs, as well as other issues.

We now must look ahead to the next frontiers. As I’ve traveled the world talking about AI, I’m constantly asked, “What’s next?” What will happen in another five, 10, or 20 years? What will the future hold for us humans?

These are essential questions for our moment in history, and everyone working in the technology space has an opinion. Some believe that we’re in the midst of an “AI bubble” that will eventually pop, or at least cool off. Those with more drastic and dystopian views believe everything from the notion that AI giants will “hijack our minds” and form a utopian new race of “human cyborgs” to the arrival of an AI-driven apocalypse. Each of these projections may be born out of genuine curiosity or understandable fear, but they are usually speculative or exaggerated. They miss the complete picture.

Speculation varies wildly because AI appears complex and opaque. I’ve observed that people often rely on three sources to learn about it: science fiction, news and influential people. In science fiction books and TV shows, people have seen depictions of robots that want to control or outsmart humans, and super-intelligence turned evil. From the news, whose currency is often negative and outlying examples rather than quotidian examples of progress, people read about autonomous vehicles killing pedestrians, technology companies using AI to influence elections, and people using AI to create fake news and deep fakes. Relying on “thought leaders” ought to be the best option, but unfortunately most are experts in business, physics, or politics, not artificial intelligence technology. Their predictions often lack scientific rigor. What makes things worse is that journalists tend to quote these leaders out of context, in order to attract eyeballs. So, it is no wonder that the general view about AI has turned cautious and even negative, built on misinformation or half-truths.

To be sure, aspects of AI development deserve our scrutiny and caution, but it is important to balance these concerns with exposure to the full picture of this crucially important technology’s potential. AI, like most technologies, is neither inherently good nor evil. And like most technologies, AI will eventually produce more positive than negative impacts in our society. Think about the tremendous benefits of electricity, mobile phones, and the internet. In the course of human history, we have often been fearful of new technologies that seem poised to change the status quo. In time, these fears usually go away, and these technologies become woven into the fabric of our lives and improve our standard of living.

I believe there are many exciting applications and scenarios in which AI can enhance our society profoundly. Firstly, AI will create tremendous value for our society — PriceWaterhouseCooper estimates $15.7 trillion by 2030 — which will help reduce hunger and poverty. AI will also create efficient services that will give us back our most valuable resource — time. It will take over routine tasks, and liberate us to do more stimulating or challenging jobs. Lastly, humans will work symbiotically with AI, with AI performing quantitative analysis, optimization and routine work, while we humans contribute our creativity, strategy and passion. Each human’s productivity will be amplified, allowing us to realize our potential. AI is poised to make profound contributions to humanity, while causing challenges that can be addressed.

Amid what seems like a feedback loop of negative stories about AI, I believe it’s important to tell these other stories, too. To answer that question of what happens next, I decided to write another book about AI. This time, I wanted to extend the horizon a bit further — to imagine the future of the world and our society in 20 years’ time, or 2041. My aim is to tell the “real” AI story, in a way that is candid and balanced, but also constructive and hopeful. This book is based on realistic AI, or technologies that either already exist, or can be reasonably expected to mature within the next 20 years. The stories in this book offer a portrait of our world in 2041, based on technologies with a greater than 80% likelihood of coming to pass over that timeframe. I may overestimate or underestimate some. But I believe this book will represent a responsible and likely set of scenarios.

How can I be so confident? Over the past 40 years, I have been involved in AI research and product development at Apple Inc., Microsoft Corp., and Google LLC, and managed $3 billion in technology investments. So, I have hands-on experience about the time and process to take an academic paper to a pervasive product. Further, as an adviser to governments on AI strategy, I can make better predictions based on my knowledge of policy and regulation frameworks, and the reasoning behind them. Also, I avoid making speculative predictions about fundamental breakthroughs and rely mostly on applying and extrapolating the future of existing technologies. Since AI has penetrated less than 10% of our industries, there are many opportunities to reimagine our future with AI infusion into these industries. In short, I believe that even with few or no breakthroughs, AI is still poised to make a profound impact on our society. And this book is my testimony.

I’ve been told that one of the reasons that “AI Superpowers” had an impact on readers was that it was accessible to people with no prior knowledge of AI. So when I embarked on this new book, I asked: What can I do to tell stories about AI in a way that makes them even more widely appealing? The answer, of course, was to work with a good storyteller! I decided to reach out to my former Google colleague Chen Qiufan. After Google, I started a venture capital firm. Qiufan did something more adventurous — he became an award-winning science fiction writer. I was delighted that Qiufan agreed to work on the project with me, and to dovetail his creativity with my judgement on what technology will be capable of in 20 years.

We named our book “AI 2041” because that is 20 years from the initial publication of this book. But it didn’t slip our notice that the digits “41” happen to look a bit like “AI.”

We hope the stories entertain readers, while deepening their understanding of AI, as well as challenges posed by AI. We also hope that the book’s roadmap of the coming decades will help our readers prepare themselves to capture the opportunities and confront the challenges that the future will bring. Most of all, we hope all readers will agree that the tales in AI 2041 reinforce our belief in human agency — that we are the masters of our fate, and no technological revolution will ever change that.

Kai-Fu Lee is chairman and CEO of Sinovation Ventures.