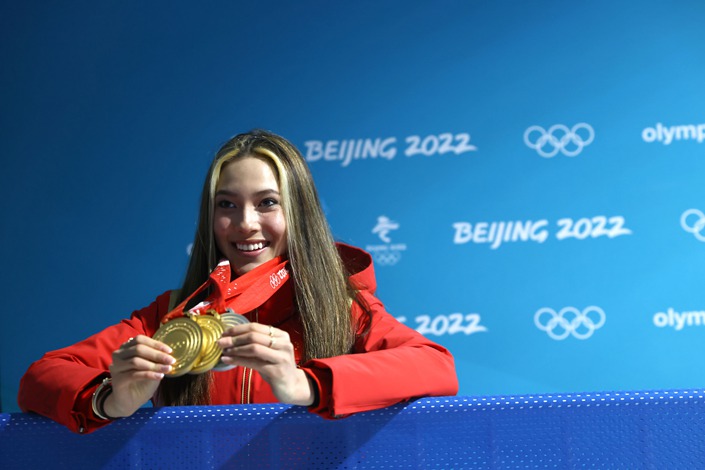 The medals have been awarded and the competitors have long since departed from the 2022 Beijing Winter Olympics, but the popularity of certain star athletes shows no signs of fading.

Xu Mengtao, Olympic freestyle skiing champion, joined a popular reality show. Another example, perhaps more famous, is the queen of freestyle skiing, Eileen Gu. Gu recently revealed at the TIME100 summit that she will serve as the ambassador for a U.S. bid to host the Winter Olympics in 2030 or 2034. Although the U.S. Olympic Committee immediately stated that her appointment hadn’t been finalized, it is true that Gu has become a bridge that links China and the United States, and maybe even one that connects China with the rest of the world.

Typically, an Olympic bid ambassador plays little more than a symbolic role. By appointing athletes who have links to the games or brandish an international reputation, a prospective host city aims to enhance its public image and to impress the International Olympic Committee.

In the past, other Chinese athletes have taken up the role. Snooker star Ding Junhui served as the ambassador for London’s bid to host the 2012 Olympic Games, as he was trained, played and lived in the U.K. Interestingly, that same year, Gao Min, China's “Queen of Diving,” served as the Olympic bid ambassador for New York.

For Gu, who has trained and competed in the United States, it’s logical for her represent Salt Lake City, a world-famous ski resort town.

But Gu’s likely new role has attracted controversy as well as attention in China. Why? Some of it has to do with the more developed social media environment. Perhaps, many Chinese subconsciously have attached complex psychological projections on her, the most dazzling sports star of this year. One could argue that Gu’s persona is seen in two different ways, based on who’s doing the looking. In China, she known by her Chinese name, Gu Ailing.

In the eyes of many Chinese sports fans, Gu Ailing is a girl who plays cool sports and represents the image of contemporary Chinese youth. Like Gu, young people in China today enjoy their youth and are not afraid of challenges. They are neither utilitarian nor jaded, and represent a refreshing new face of sports. These fans are ready to accept the image of Gu Ailing as a Chinese athlete. During the Olympics, she trained hard wearing her Chinese national team uniform, and tried her best to show her connections with Chinese culture at press conferences and other occasions. Outside the sports arena, her international and local heritage are perfectly integrated in her words and actions. She has run on the streets near Beijing’s bustling Sanlitun area, and is active in inspirational speeches and celebrity banquets, as well as in the many ads shown on Chinese TV and billboards.

Many American sports fans have a different view of Eileen Gu. For them, she went to China one her own to pursue the Olympic dream, overwhelmed the competition with her superb skills, challenged herself and won the gold. She is a new kind of role model — capable, beautiful, confident and international. After returning to the United States in early May, she began to appear frequently at celebrity events and in fashion circles. She attended an F1 race, walked the red carpet at the Cannes Film Festival and appeared at the awards ceremony for the LVMH Prize for young designers. For each occasion, she displayed ease and elegance.

In this sense, how one sees Eileen Gu, or Gu Ailing, serves as a litmus test of sorts for one’s own values when it comes to sports.

To some extent, her fame and success remind people of the ascendence of Chinese sports, which has been on a rising trajectory. In the early 1970s, at a time of tension between China and the United States, Chinese table tennis star Zhuang Zedong gave a piece of Hangzhou brocade as a gift to forge friendship with American player Glenn Cohen, who accidentally boarded the Chinese team's bus. The pingpong diplomacy helped open a new chapter in Sino-U.S. relations.

More than a decade ago, Chinese basketball star Yao Ming wowed NBA fans, while showing a humorous and wise image off the court. At about the same time, Lang Ping, the legendary Chinese volleyball player-turned-coach, also showed world class professionalism and high emotional intelligence when coaching the U.S. women’s team. Both Yao and Lang have successfully showcased Chinese culture internationally.

Now, at a time when an even more complex world is facing challenges, Gu has become the latest cultural bridge between China and the U.S.

But unlike the names mentioned above, who were immersed mostly in Chinese culture since childhood, Gu was born in the United States and grew up with both Chinese and American culture. This makes her more thoroughly integrated into the cultures of both sides of the Pacific.

As Gu said, “My mission is to use sport as a force of unity … to unite people, promote common understanding, create communication and forge friendships between nations.”

In this process, she hopes inspire young girls around the world.

People can accept Gu as an aspiring, friendly young girl, and they should accept the fact that she is “both Chinese and American.” We should respect her contributions to Chinese sports, to the international Olympics, and to the cultural exchange between China and the United States.

This is the true meaning of sports, and it is also a concrete manifestation of the confidence of Chinese sports culture.

Yang Wang is a sports commentator.