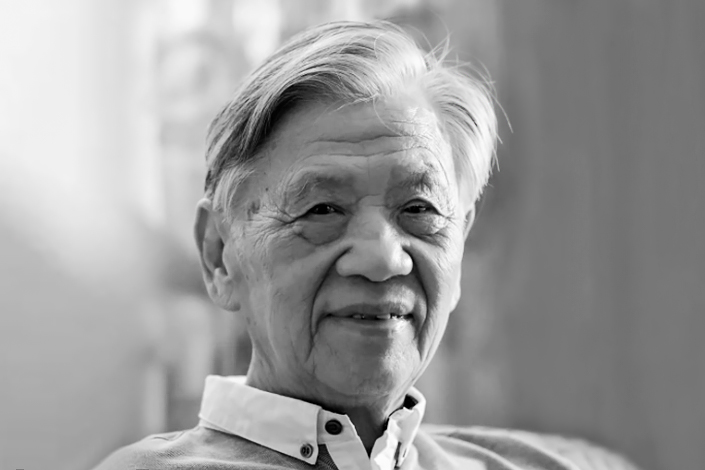 Editor’s note: Renowned Chinese lawyer Zhang Sizhi passed away on June 24. Through a life of ups and downs, he made a great contribution to the Chinese legal profession, inspiring younger generations in his later years. We invited Si Weijiang, a lawyer at Shanghai-based DeBund Law Offices, to write this article in his memory, in the hope of transmitting something of his great spirit.

Zhang Sizhi has passed away at the age of 95. While many recognize Zhang to have been a prestigious lawyer, most do not understand why he is considered to be such a venerable figure. Engaged as a defense lawyer in the 1982 trial of the Gang of Four (a counter-revolutionary faction charged with treasonous crimes), Zhang was plunged into an ethical dilemma. While most of the defense lawyers’ efforts were perfunctory, he performed his duty with dedication, doing extraordinarily pioneering work.

It has been said that for the first half of Zhang’s life, he was a political pariah. In the second half, he aroused the conscience of the judiciary. Zhang joined the Communist revolution at an early age. Entering the law department of the then Chaoyang University in Beijing in 1947, he joined the Communist Party of China the next year, while it was still underground, and began to work in Beijing’s judicial system in February 1949. In the early days of the new People’s Republic of China, the ruling party launched several extreme political movements. Zhang actively participated in some of these, exposing and criticizing others, acts which he regretted for the rest of his life. Concerning the Campaign to Suppress Counterrevolutionaries in 1951, he recalled “I still vividly remember a shocking scene in which 70 people were shot.”

However, when things are pushed too far, they sometimes turn into their opposite. In 1954, Zhang was unjustly accused of membership of the Hu Feng counterrevolutionary clique. In 1957, during the Anti-Rightist Movement, he was designated a “rightist.” He was to live with that accusation for the next 22 years: 15 years of reform through labor and seven years working as a Chinese teacher, a period of suffering through which he gained an extraordinary understanding of the situation and politics of China, and of human nature.

In 1979, he was able return to the judiciary as a lawyer. At that time, lawyers were state functionaries, duty bound to cooperate with judges and prosecutors to apply the law in a correct way.

Nowadays however, the role of the lawyer is defined differently — professionals licensed by the state and paid for by the market. The identity of an occupation’s paymaster can make a huge difference. In “The Road to Serfdom,” Friedrich Hayek warned of the danger of despotism. With the market as paymaster, lawyers enjoy a certain degree of freedom. However, their access to that market still depends on qualifications issued by the government. Lawyers’ professional ethics, on the other hand, dictate that they do their utmost to protect the legitimate rights and interests of their clients, within the scope of law, regardless of who pays them.

In the trial of the Gang of Four, Zhang served as a government-appointed lawyer. He defended Li Zuopeng, an intelligent man who had studied telegram decoding. After the trial, Li composed a limerick which he did not give to Zhang until he had left prison years later, essentially concluding that Zhang’s defense had been “better than nothing.”

Zhang was an inheritor of the legal tradition, and following years of turbulence when the system of lawyers had been reinstated, he pioneered the profession’s development. Once it had opened up, it naturally developed a life of its own. If a person of conscience becomes responsible for a defendant and accountable to the law, a deeply-felt sense of responsibility and passion naturally arises. But the law also stipulates that anyone can hire a lawyer, and a lawyer is free to mount any defense permitted within the scope of the law. This is an excellent provision, but often easier said than done. For example, a lawyer defending a person the masses wish to be executed may be abused by the public, perhaps even facing risks to their personal safety. A lawyer defending a person hated by a powerful institution can also encounter all kinds of frustrations.

Most of Zhang’s cases fell into the latter category, repeatedly forcing him to confront power. And although these defenses are not as celebrated as some more recent famous cases, his efforts are like a shining jewel in a dark room, leaving those who see them amazed.

People often describe Zhang as having been a great lawyer but in truth, much like the expression “beauty,” the term “great lawyer” has fallen out of use. Nonetheless, Zhang was an extremely high-level professional lawyer, famous for his efforts to protect human rights. The level of his professional ability can be observed from his defenses. I have listened to the recording of his defense in the 1987 Daxing’anling wildfire case. His statements to the court were masterful in their restraint and shrewdness.

Zhang’s willingness to take on the risks of such cases may reflect his early experiences in political movements, but his pursuit of justice was lifelong. Some people say that taking on defense cases of this kind — the kind that can never win — makes no sense. And some believe that lawyers working on such cases can only perfunctorily adhere to legal professionalism. Incapable of changing the outcome most of the time, their role is reduced to one of comforting clients in court. But if one has a firm belief in law and justice, even defenses such as these retain a historical, and thus a future value. We should not judge Zhang by his success or failure. His dedication to lawyering was entirely consistent with the times. That alone makes him a great man. Holding high the banner of professionalism for Chinese lawyers, he pointed the way forward.

Zhang may have been born at the wrong time, but it was the times that made him who he was. What he endured in the first half of his life inspired the achievements of the second. Zhang has now died, and we still have a long way to go. His passing away has perhaps spared him the need to contemplate yet more difficult times. Each generation has its fate; improvements in a legal system are best measured over decades or even centuries. Recognizing this, we can only conclude that Zhang’s legacy was one of indelible enlightenment.

Si Weijiang is a partner at the Shanghai-based DeBund Law Offices.