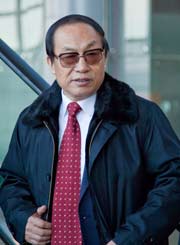 (Beijing) -- China's minister of railways, Liu Zhijun, has been placed under investigation on allegations of severe disciplinary violations and has been removed from his post as Communist party secretary at the ministry, according to the official Xinhua News Agency on February 13.

Liu is the highest ranking Chinese official to be put under a criminal probe since 2006, when the former party secretary of Shanghai, Chen Liangyu, was dismissed on corruption charges.