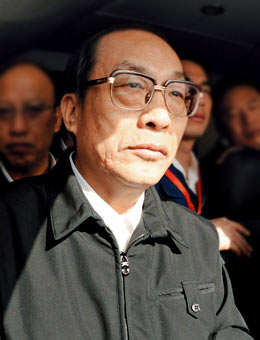 Their working lives followed parallel tracks from ground-level jobs to powerful positions as railway executives – and now to corruption charges that probably permanently derailed their careers.

The most recent of these three career train wrecks came February 12, when news surfaced that China's Railways Minister Liu Zhijun, who also served as the ministry's Communist Party secretary, was at the center of a financial fraud investigation.

Liu, 58, was dismissed a few days later after nearly eight years in office. He was replaced by Sheng Guangzu, a former director of the General Administration of Customs.

And the first executive to fall was Luo Jinbao, 55, who was dismissed from his post as chairman of a listed company called China Railway Tielong Container Logistics Co. Ltd. in October. Authorities claim he accepted bribes. A formal investigation into his behavior began in January.

Indeed, the three have been close for many years, a source close to the Taiyuan Railway Bureau said. Luo was an old friend of Liu, and Ding had used her ties to Luo to cultivate a relationship with Liu even before he became railway minister.

"Ding and Liu had a complex relationship and complex interests," said a source.

Sources also say the three cut deals through the latest boom years for China's rail industry, which roared into high gear in 2006 with the start of large-scale, nationwide, high-speed railway construction projects that continue today.


Ding used her access to Liu to function as a low-profile but well-paid mediator between the ministry and state-owned enterprises vying for various rail projects. One source said she pocketed up to 800 million yuan for helping arrange contracts. Of that amount, the source said, Ding complied with Liu's direction not to spend about half.

Although his business ties to Liu and Ding are not entirely clear, Luo received orders to plan the nation's first high-speed passenger rail line, from Shijiazhuang in Hebei Province to Taiyuan in Shanxi, in late 2005 while he was director of the Datong Railway Bureau and party secretary of the Taiyuan Railway Bureau.

And from the minister's office in Beijing, Liu cultivated connections with Ding and Luo in exchange for bribes and to help his family members profit from high-speed rail contracts. He also got something extra through Ding: young women. Ding told authorities she introduced Liu to numerous women with whom he had affairs.

"Ding introduced Liu to girls," said a source. "And Ding had to listen to Liu on how to manage money."

Those issuing contracts tenders and the winning bidders were all state-owned enterprises.


Companies outside the system rarely won projects. Executives at two suppliers of high-speed rail equipment said that until this year, the railway ministry used an "expert review" system for choosing contractors, in which middlemen paved the way for contracts, and one of them was apparently Ding.

Last summer, authorities learned that a major SOE – which is now involved in the Beijing-Shanghai high-speed rail project but has yet to be publicly identified – handed Ding 100 million yuan off the books after she helped it win a railway tender.

Ding and Liu allegedly sought to dodge investigators, using their webs of inside connections.

But the walls started closing in on Ding after the unnamed SOE became the focus of a routine probe by the National Audit Office. Company officials admitted paying off Ding, explaining that they were only following an unwritten rule of the tender process for track building, locomotive purchases, train station construction and station renovation contracts.

The audit did not mention the matter, but the information was apparently passed to regulatory investigators.

Payoffs for mediators have been common for years in the railway system. One source said Ding was one of many intermediaries, who generally collect fees worth about 3 percent of a single contract. Over the years, Ding got involved in project deals whose combined values were in the tens of billions of yuan.

"This unspoken rule was quite clever," said the source. "SOEs cannot give kickbacks directly. After winning a contract, they subcontract, sometimes with private companies, which in turn give kickbacks to a middleman.

"Other private subcontractors have their own connections and can segment a contract or win an order for a subcontract, and then cooperate with an SOE," the source said.

The Ministry of Railways, with Liu still at the helm, took steps to clean up the process last October by unveiling new regulations for rail construction tenders and bidding. Details were released in December. But the rules remained opaque, sources said, and the use of mediators continued right up until Liu's removal.

Today, a legacy of Liu is that high-speed railways are spreading nationwide but "almost every project exceeds budget," a railway contractor said. "The Beijing-Shanghai high-speed railway was initially estimated at 12.34 billion yuan. In the end it cost 21.5 billion.

Construction of the "Guangzhou South Station went from an estimate of a couple billion yuan to 14.8 billion yuan. This is because every project is contracted, subcontracted and subcontracted again," the contractor said. "If you want to profit from the process, you have to continuously modify the plan."

Since the Liu shakeup, the rail industry and the public have wondered whether the future of high-speed rail may be affected. One ministry official said the development strategy would not change. But others familiar with high-speed rail say high-speed projects are likely to be reevaluated.

An analyst for a foreign securities firm who specializes in infrastructure construction told Caixin that "the overall development strategy for high-speed rail shouldn't be affected" by Liu's demise. "But high-speed rail projects that have not yet been launched may be postponed."

Liu's successor, Sheng, faces a complex task. He'll have to select routes for new high-speed construction projects, and try to resolve the legacy of debt and risk tied to high-speed rail tracks laid in recent years.

A government audit of the Ministry of Railways said the agency's debt had ballooned to 1.3 trillion yuan by the end of 2009, and paying off that debt with interest will cost 73.3 billion yuan annually.

Sheng is also being forced to decide whether to steer the railway system into a period of market reform after years of stagnation. Questions remain over how to separate government and private business, overhaul railway financing, and open the freight system and the rest of the rail system – China's largest bastion of state monopoly – to outside capital.

Many in the high-speed rail construction industry have publicly expressed concerns. A foreign supplier of high-speed rail materials, for example, told Caixin that China's tendency to rush projects raises safety risks: It takes only two years to build 300 kilometers of high-speed railway in China, but a decade in other countries.

A source at Wuhan's rail system told Caixin that central government officials have stressed safety since Liu's departure, and that's "a signal" that the ministry "will pay more attention to safety issues in the future than speed issues."

Liu had long prevented many of the reforms sought by many business and industry interests. In 2003, immediately after taking office, he shelved proposed reforms that would have separated the system's network and transportation divisions.

In 2002, the ministry introduced several new measures for tendering bids to replace a system that said the largest contracts had to go through the ministry's Railway Project Transaction Center.

But during the preparation period for the Beijing-Tianjin high-speed rail project, many procurement and engineering contracts had been decided before the bidding. And as minister, Liu refused to break the railroad monopoly or liberalize business practices, but instead called for the rail network to develop ever-more rapidly.

Liu's acquaintances have called him courageous, strong and daring as well as "smooth," said one source. "He understands how to attend to people, and gives face to everyone."

Raised in a modest family, Liu started working at age 19 as a maintenance employee of the Wuhan Railway Bureau branch office. He gradually climbed the ladder toward the top, taking up key positions at railway bureaus in Zhengzhou, Guangzhou and Shenyang.

In 1994, Liu was transferred to the Ministry of Railways and named head dispatcher. Two years later, he was named deputy minister, and in March 2003 became minister.

Luo, meanwhile, has a similar background and knows Liu well.
In February 2006, he was transferred to the railway ministry's Transport Command Center for positions as deputy director as well as director of equipment, thus being given responsibility for scheduling freight trains.

After making friends with Luo, Ding's coal railcar shipping business took off. Major coal price increases in 2003 laid the groundwork for her company's meteoric rise, and soon she had branched out with new ventures in railway sound barrier construction, advertising and entertainment.

Another key figure in the three-part demise of Liu, Luo and Ding was Liu Zhixiang, the ex-minister's little brother. According to several sources, investigators now want to know more about Liu Zhixiang and how he rose to become deputy director of the Wuhan Railway Bureau.

The brother rose from ordinary railway worker to head of the Hankou Railway Station in 1997. But that same year he clashed with Gao Tiezhu, a contractor at a station hotel service. Liu Zhixiang rejected some of Gao's demands, and the contractor retaliated by filing criminal claims with authorities about the station head's activities.

Five years later, though, Liu Zhixiang was promoted to deputy director of the Wuhan Railway Bureau. And soon, officials say, he had another station contractor arrange to murder Gao in his home.

A long probe ensued, and in January 2005 party officials in Hubei Province had Liu Zhixiang detained. He was later arrested and found guilty of embezzlement, bribery, intentional injury and possessing property from unidentified sources worth more than 40 million yuan.

In April 2006, Liu Zhixiang was sentenced to death with a two-year reprieve and stripped of his political rights for life. Yet his sentence was reduced to 16 years in prison. From behind bars, he continued using his high-level connections to help businesses win railway contracts.

Caixin learned that Liu Zhixiang was supposed to be transferred to a prison hospital, but was allowed to remain in local hospital instead. Yet he was finally transferred on the day investigators announced the case against his brother.