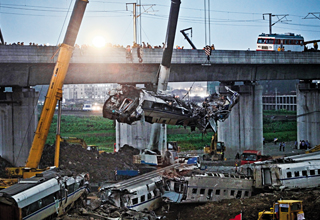 Wrinkled tickets for seats on train D3115, coach No. 16, are what's left of a terrifying night for Wang Hairu and her husband Cao Weidong, survivors of a bullet-train collision.

The couple and hundreds of other passengers were aboard the Beijing to Fuzhou train as it rolled slowly during a nighttime thunderstorm July 23. The train had recently left the station in Yongjia, and now passengers including Wang and Cao were preparing to disembark at the next stop – Wenzhou.

As they gathered luggage, Wang teased her husband about his messy hair. They exchanged smiles. Then, the nightmare began.

Fast train D301, barreling through the rain at more than 100 kilometers an hour, slammed into the rear of D3115. Metal sheered, glass shattered, passengers screamed.

Ministry of Railways investigators later said that at least 40 people died and more than 200 were injured in the Zhejiang Province accident, China's deadliest high-speed train wreck.

Though the dark rain, residents of a nearby village watched golden sparks and thick, black smoke rising from coaches on the elevated tracks. Other cars fell to the muddy ground below. One coach dangled vertically from the side of the concrete viaduct, with passengers inside.

Wang remembers a deafening sound. The coach shuddered violently, lights went out and Wang's husband clutched her head, pulling her close to his chest.

No. 16 was one of four cars on the D3115 that jumped the tracks but stayed on the bridge. The impact shoved four D301 coaches from the viaduct, leaving one dangling and sending three to the ground.

What happened? Five days after the tragedy, newly appointed Shanghai Railway Bureau Director An Lusheng gave an explanation at a meeting in Wenzhou: He said a serious flaw in the design of rail signaling equipment installed near the Wenzhou South Station had led to an equipment failure. Triggering the failure, he said, was a lightning strike.

Today, the accident is the subject of an investigation led by the railways ministry, which built the railroad and operated the ill-fated trains.