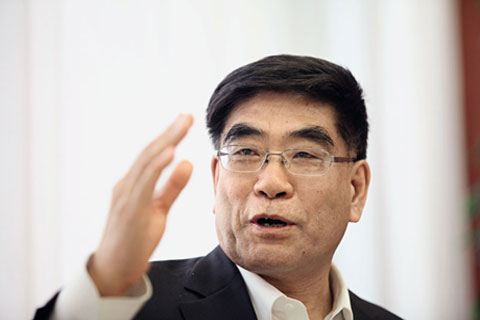 (Beijing) – China's major oil companies have been tapped to lead the powerful state-run sector into the next phase of nationwide market reforms.

And a top executive at one company – China Petroleum and Chemical Corp. (Sinopec) Chairman Fu Chengyu – is taking the initiative to reassure investors and encourage public support.

Sinopec said it plans to let investors buy up to 30 percent of its oil sales and marketing business, which includes a chain of retail gas stations. CNPC, on the other hand, has proposed reforming the upstream oil development business.

Sinopec's project has been closely scrutinized, drawing mixed reactions. Some industry and government analysts have hailed the overhaul as a standout reform, since the Sinopec division that will soon open to outside investors is profitable, stable and according to the company worth at least 400 billion yuan.

But critics say inviting investors to partner with Sinopec in a downstream venture is hardly significant since China's fuel marketing business is already open to private investment. Besides, they argue, even in private hands the downstream business would still be subject to state-run oil companies that control everything upstream.

Naturally, Sinopec and Fu are keen to see the mixed-ownership project succeed. So the chairman has taken the initiative by stepping forward to explain, defend and put into context the company's reform efforts.

Fu, who has headed the company since 2011, laid out details in a March 8 interview with Caixin at Sinopec's headquarters in Beijing. He offered his personal take on the mixed-share ownership proposal and hinted at how far Sinopec intends to go on the reform path. Excerpts from that interview follow.

Caixin: Can you describe mixed-share ownership?

Fu Chengyu: All of our previous reforms have been consistent with our overall direction and objectives. This is just deeper-level reform. The overall reason for launching comprehensive reforms is to improve the development of the socialist system with Chinese characteristics, while promoting modernization of the national governance system and governance capabilities.

So the direction has not changed. What has changed? The idea is that the economic sector is to let the market play a decisive role in allocating resources, which differs from the view held in the past that "the market should play a fundamental role." This not only changes a few words, but also changes the content and meaning. Neither are the depth and breadth the same. From this perspective, so-called "mixed-share ownership" improves and deepens the basic economic system, with public ownership as the mainstay.

How can this idea be implemented and improved? Mixed-share ownership requires a combination of cross-shareholding by holders of state capital, collective capital and private capital. We want to ensure that regardless of the type of capital that's coming in, the national economy eventually benefits.

To build up the international competitiveness of state-owned enterprises, we need to see what we're missing. Sinopec doesn't lack funds, but it lacks vitality. The key is to change the mechanism by using a mixed-share ownership structure to revitalize the state economy.

First, we must address the issue of corporate governance. It must be truly market-oriented governance, which means the board of directors should not be appointed by me or any higher authority. Second, the board should represent different shareholders. Also, it's important to invite independent, non-executive directors.

Will the oil wholesale business also be opened to private investors? Are there plans to open oilfield and gas pipeline operations?

If everything is done at the same time, it would undoubtedly be done negligently. The period for opening the sales segment of the business is just like breakfast time: It's just the beginning of a longer process. The wholesale business will be opened, too. But our main business is retail oil sales, with a very small slice of the wholesale business.