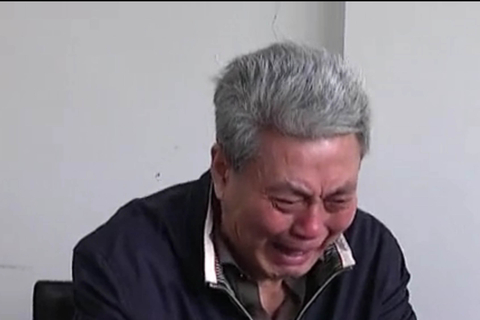 A screen grab of a CCTV documentary showing Yu Tieyi crying during a confession of his crimes.

(Beijing) – A former official of a state-owned enterprise (SOE) subsidiary was convicted in Heilongjiang province on Friday of taking a record 307 million yuan ($45.4 million) in bribes.

Yu Tieyi, a deputy general manager of a logistics company affiliated with Heilongjiang Longmay Mining Holding Group Co. Ltd., one of the top SOEs in Heilongjiang, was sentenced to death with a two-year reprieve by a city court.

At least seven senior party officials, including former security chief Zhou Yongkang, have been indicted or been found by anti-corruption investigators to have embezzled or taken bribes of at least 100 million yuan.

Yu, 62, who was detained by Heilongjiang anti-corruption authorities in 2012 and arrested a year later, was found to have helped suppliers secure contracts and manipulated procurement prices in favor of subcontractors, court documents show. In return, he received a stake in some of the firms or was paid as an adviser.

Yu had a particular penchant for luxury cars and luxury watches, according to the anti-graft agency in Heilongjiang. Investigators uncovered dozens of expensive vehicles in his possession, including Rolls-Royce and Bentley cars.

"I would feel bad if there was a day when I was not given money," he was quoted as saying in an article published on the Heilongjiang Commission for Discipline Inspection website on Sept. 3, 2014.

Anti-corruption authorities did not say how Yu's crimes came to light.