By staff reporters Yu Ning and He Xin 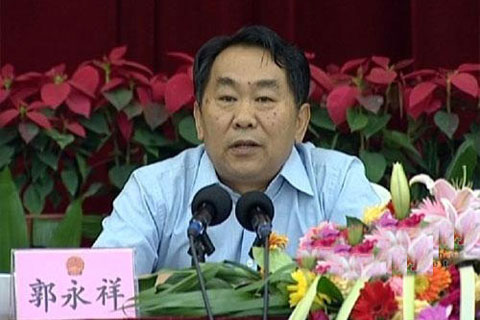 (Beijing) – The country's top prosecutor's office said on April 9 that a criminal investigation into a former vice governor of Sichuan Province who is suspected of taking bribes has started.

Guo Yongxiang, who served as vice governor of the southwestern province from 2006 to 2008, was expelled from the Communist Party the same day, the party's graft fighter said. An investigation into Guo by the Central Discipline Inspection Commission (CDIC) started in June.

The move is part of a major anti-corruption campaign that the party's general secretary, Xi Jinping, announced in January 2013. The campaign is heavily linked to Sichuan, ensnaring senior officials, executives of state-owned companies and tycoons in the province.

The CDIC said on its website that Guo used his position to seek personal benefits and received massive bribes himself or through his son. Guo is also accused of amoral behavior, likely a reference to the keeping of mistresses.

Guo's case is the second involving a vice provincial-level official to be handed to the Supreme People's Procuratorate. The first involved Li Chuncheng, former deputy party secretary of Sichuan.

Guo, 68, was appointed vice governor of Sichuan in January 2006. In 2008, he was given a senior role in the provincial congress, then retired in 2009. He was later made president of the Sichuan Federation of Literary and Art Circles, a non-government organization for writers and artists.

Guo spent the early part of his career in the oil industry. From 1972 to 1998, he worked in the country's second largest oilfield, the Shengli Oilfield, in the eastern province of Shandong. During that time he was an employee of China National Petroleum Corp.

In July 1998, he became the secretary of Zhou Yongkang, who was minister of the then new Ministry of Land and Resources. Zhou has retired from the Politburo Standing Committee, the party's top decision-making body. From 2007 to 2012, Zhou headed the party's Central Politics and Law Committee, which meant he handled the nation's public security affairs.

In January 2000, Guo followed Zhou to Sichuan where he continued to work as his secretary. Zhou was the province's party chief until late 2002, when he went to Beijing as minister of public security. Guo then stayed in Sichuan.

Guo, along with Li Chuncheng and Li Chongxi, the former chairman of the Sichuan's People's Political Consultative Conference, a political advisory body, were three of Zhou's favorite subordinates in Sichuan, several sources tell Caixin. The CDIC started an inquiry into Li Chongxi in December.

Officials in Sichuan describe Guo as well-versed in how to succeed as an official in China.

"He was very experienced in officialdom," one official said. "He always had smile on his face and was willing to do small favors."

Another source from the Sichuan government said Guo was trusted by higher leaders, and lower officials saw him as a bridge to those higher officials.

Guo also had wide connections with businesses. As vice governor of Sichuan he oversaw its agriculture, forestry and water projects.

Guo also helped Star Cable Co. Ltd. become a major supplier of CNPC and other state-owned hydropower and energy companies starting in 2004, local media reports say. According to Star Cable's documents, revenue from CNPC accounted for more than 30 percent of Star Cable's revenue in the first half 2013.

The CDIC said in the statement that Guo "used his position to benefit his son's business." Guo's son, Guo Lianxing, registered Beijing Huirun Yangguang Energy Technology Co. in 2010 with 5 million yuan. The company's business ranges from technology services and trade consulting to sales of machinery, electronic equipment and mining products.

Guo Lianxing invested 750,000 yuan in the company while the rest came from Beijing Huisheng Yangguang Investment Co., which is jointly held by Zhan Minli, the mother-in-law of Zhou Bin, and Mi Xiaodong, a former mid-level official at China National Offshore Oil Corp. (CNOOC).

The latter was detained by party discipline officials in October. Sources close to the situation said that Mi was managing oil business for Zhou Bin.

On June 8, 2013, Beijing Huisheng Yangguang had its business registration canceled.