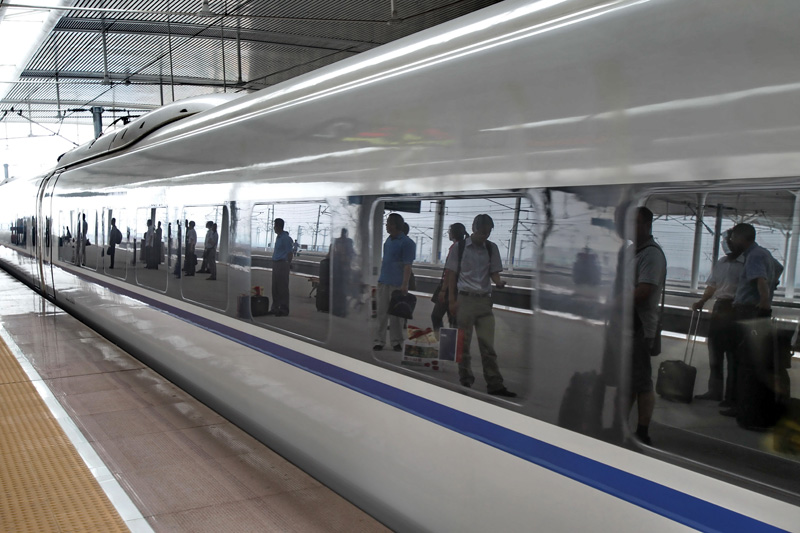 (Beijing) – The government should develop regular railroad networks and urban mass transit systems instead of throwing money away on bullet trains, a transportation expert says.

It is unwise to continue building high-speed rail lines and trains while the current high-speed network has a hard time getting enough passengers and is operating at a loss, said Zhao Jian, a professor at the School of Economics and Management at Beijing Jiaotong University.

He made the comments after Premier Li Keqiang visited a construction site on July 3 for a high-speed rail line linking Shanghai and Kunming, the capital of the southwestern province of Yunnan.

Li's visit has received much attention in the media amid signs recently that the government is leaning again on infrastructure, especially rail development, to shore up the flagging economy.

In April, the government hiked the planned investment in railroad fixed assets this year from 630 billion to at least 800 billion yuan and increased the number of new projects by 20 to 64.

A 384 kilometer passenger line linking Jinan and Qingdao, both in the coastal province of Shandong, is operating at only 30 percent of its designed capacity, Zhao said.

A proposed high-speed rail line linking the two cities, which has been hailed for setting a precedent for a financing model that relies more on local governments and private investors than the central government, is expected to reduce the travel time by 30 minutes – at the huge cost of at least 60 billion yuan, Zhao said.

Existing high-speed rail lines, except those connecting Beijing and Shanghai, will run a loss for a long time, he said. That puts a huge burden on the already heavily indebted China Railway Corp., the operator of the country's railroads, he said.

He proposed increasing spending on regular railroads, especially cargo lines, and developing mass transit rail systems in and around cities to relieve the pressure on traffic and home prices.

Trucks are the main transportation method for bulk commodities, including coal, steel and oil, in China. Shipping by trains would be more cost-effective, but there are not enough freight trains and lines to meet demand, Zhao said.