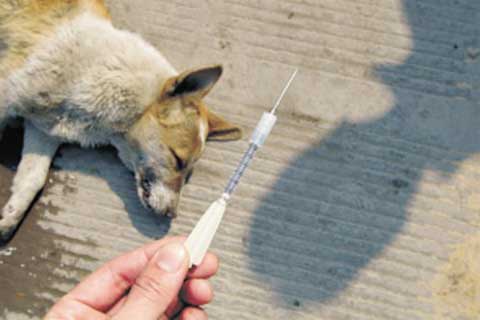 (Beijing) – A group of people allegedly ran a business selling meat from dogs that were poisoned – sometimes with cyanide – then stolen and sold to restaurants over two years, prosecutors said during a trial in the eastern province of Zhejiang.

Seventeen people aged from 31 to 74 stood trial on August 25 and 26 in the city of Fenghua on charges of illegal production and sales of toxic and hazardous food. It was unclear what pleas the 17 entered, and no verdict was announced.

Residents of one neighborhood told police in June that a group of people had organized the stealing and killing dogs, Zhejiang Satellite TV reported. Police found that the dogs were sent to underground shops where they were slaughtered so the meat could be sold.

Prosecutors said seven people poisoned the animals with cyanide and an anesthetic bought online in Fenghua and in nearby cities. They then sold the dead dogs to the underground shops.

Prosecutors said two of the men bought the meat to resell even though they knew it was tainted. One defendant said they bought the meat without ever asking where it came from.

The pair bought the meat for 8 yuan per kilogram and resold it to wholesalers for 12 yuan, according to the indictment. Police found they bought 22 tons of dog meat since April 2012 and sold it to cities in Zhejiang, including Linhai and Longyou, and also in Nanchang, the capital of neighboring Jiangxi Province.

One of the wholesalers was also on trial. Prosecutors accused him of selling 38 tons of tainted meat over the past two years to restaurants and other businesses.

A defendant who worked in the butchering facility said most of the dogs were killed with an anesthetic. Police found levels of anesthetic in the frozen meat were so high they posed a threat to human health, the court heard.

Hao Haihong, a professor at the Veterinary Medicine School of Huazhong Agricultural University in the central city of Wuhan, told Caixin the cyanide would also pose a health risk to humans even if the meat was cooked. Cyanide causes dizziness, vomiting and possibly death, he said.

The two men who resold the meat told the court they would never dare eat it, and another defendant said he knew the anesthetic could be a problem. "I don't know what will happen if someone ate the meat, but I know that the anesthetic we used to kill dogs could also kill humans," he said.

Eating dog meat is legal in China, but it has become controversial. Some in the public have called for a ban on the sale and slaughter of dogs, but people in certain areas say it is a tradition, although not a very old one.

In Yulin, in the southern region of Guangxi, locals celebrate the summer solstice by eating dog meat and drinking grain alcohol. Activists have said the animals are treated inhumanely before they are butchered, but residents say they want to keep the tradition they started in recent years.