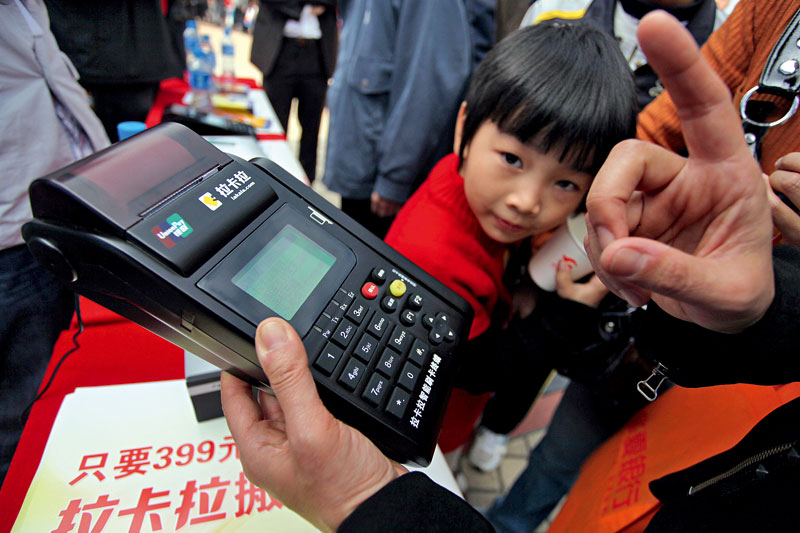 (Beijing) – China's central bank has punished four third-party payment companies that it accused of mishandling bank card transactions in a way that experts say threatens capital safety and harms the interests of banks and the bank card association.

The People's Bank of China (PBOC) said on September 10 it told ChinaPNR, Fuiou, Yeepay and VBill to stop business in up to 15 provinces by the end of this year and to stop developing new clients in other regions until it is satisfied that they have changed their practices.

At least one other company, 99Bill, has been found to have similar problems, sources close to the regulator said. The PBOC did not say whether it would punish more payment firms.

The companies were caught violating regulations for acquirers, the party acting as the receiving end in the processing of a bank card payment, a source in the central bank said. He did not elaborate.

A recent report by China UnionPay, the state-backed bank card association and the only one of its kind in the country, says acquirers including banks often violate regulations by helping merchants get around service fees on payments.

In the first six months of the year, UnionPay found that about 460,000 merchants, or 5.84 percent of the total, had problems including hiding the real purpose of transactions to lower service fees. Of that, 77 percent came from merchants that cooperated with third-party payment companies, and the others were from those that handle payments via a bank.

The service fee on a bank card payment is divided into three parts. Seventy percent of it goes to the bank that issued that card, another 20 percent goes to the acquirer and the rest is taken by UnionPay for the use of its network.

The National Development and Reform Commission (NDRC), the country's top economic planner, divides the service fee into several categories based on merchant type. The current pricing system, in place since February 2013, charges restaurants and hotels 1.25 percent of the payment, shopping malls 0.78 percent, supermarkets 0.38 percent and agribusiness owners as little as 0.25 percent.

Merchants are identified by the merchant category codes (MCC) assigned to them when they apply to install a point-of-sale (POS) machine to accept bank card payments.

With the help of a third-party payment company, a merchant can hide payments under false MCCs and escape higher service fees. This is a very common practice, a source at ChinaPNR said.

That explains why, for example, a receipt for a dinner at a Shanghai restaurant shows a fodder seller in a northern province received the payment instead of the restaurant, a banker said.

Experts familiar with the industry say some payment companies go so far as to fake clients and forge merchant documents.

According to the Industry and Commercial Administration Bureau in the eastern province of Zhejiang, several third-party payment companies have been caught this year filing applications for non-existent merchants.

An inspection by the central bank found more than 90 percent of 99Bill's some 700,000 new clients in June do not exist, a source close to the bank said.

Payment companies can use the fake merchant information to apply for POS machines for people and small businesses that otherwise do not qualify to accept bank card payments. Local media in Shandong and Hebei provinces have reported recently that many third party payment companies' agents offered to install POS machines for anyone who could present a valid identification card and a bank card. All other documents needed could be faked by the agent companies.

It was easier to spot fraud like this in the past when banks made up the majority of acquirers because they verified payment information more carefully, an analyst familiar with the payment industry said. The situation changed with the influx of third-party payment operators, he said.

From May 2011 to July, the central bank has granted a third-party payment license to 269 companies, including 84 approved to be acquirers for bank card payments. Many of the payment companies rely heavily on poorly regulated agent companies to develop clients in small cities.

UnionPay said it has required more than 200,000 merchants to make up the shortfall of 356 million yuan in service fees for misclassified bank card payments, which were made in the first six months of the year. Ninety percent of the penalty was handed to banks that issued the cards used in transactions, and UnionPay got the rest.

A manager at UnionPay said at least another 200,000 merchants have escaped punishment, citing data that shows as much as 1 billion yuan worth of service fees could have been avoided by the end of the year.

Compared with 2013 and earlier, violations of payment rules have become more common and serious, he said.

In a typical scheme, a payment company or its agency lures stores with lower service fees to "upgrade" their POS machines and secretly replace the system with its own. Payments handled by the different machines would be routed through the new payment company's network. Both the stores and the old acquirer were often kept in the dark about the change.

A branch of the Agricultural Bank of China (ABC) in Haining in Zhejiang Province has been a victim of the theft. It told the bank's Zhejiang office in June that it found an agent company swapped out a few POS machines for its own in May, meaning that all payments handled by the machines from then on were processed by a third-party payment company instead of the bank.

The stores agreed to have their POS machines changed because they were promised lower service fees. But they did not know that they were no longer sending payment data to ABC, the bank said.

The central bank requires all acquirers to transfer cash to the merchant within three days of the payment. That means third party payment companies can hold clients' money for up to two days. There is little supervision over how they store and handle the money.

The owner of an agent company of a third-party payment operator recently disappeared with 320,000 yuan that should have been transferred to merchants, UnionPay said. It did not name the companies, saying only that the police have started investigating.

In the United States, he said, service fees on credit card payments can reach 2.5 to 2.7 percent of the total and that leaves acquirers a profit margin of about 0.5 to 0.7 percent. The figure is even lower for debit card transactions.

Lower service fees on bank card payments in China mean that the acquirers can barely make any profit and some may be even losing money, he said. "People are reckless when there is no sustainable model for making profit."

For banks, that may not be a big problem because they also issue cards and that role gives them a big share of service fees, a source with the credit card department of a large bank said. There is also the added benefit of attracting deposits by issuing bank cards, he said.

But this model does not work for third-party payment companies, which do not issue bank cards. Some have branched into running wealth management services for clients, several industry observers said. Many more have been doing all they can to sidestep UnionPay's network so they can keep its share of the service fee.

"Not a single specialized institution in China can make money just by providing acquirer services," Chen said. "This is an extremely unbalanced situation."

A source from ChinaPNR said the environment has changed greatly from the beginning of the century when the government decided on the current rule of splitting service fee among card issuing banks, acquirers and UnionPay.

The rule was meant to encourage banks to issue cards back then, he said. Now Chinese people hold more bank cards on average than residents of many other developed countries, the incentive is no longer needed, he said.

"The mechanism of profit distribution needs to adapt accordingly to encourage improvements on the part of acquirers, so they do not always engage in vicious competition," he said.

He said UnionPay has led efforts to negotiate with the NDRC and the central bank to change the rules of charging and distributing service fees on bank card payments since October.

Sources close to the situation said the two regulators have reached a preliminary agreement on actions to charge credit and debit card payments different service fees while uniting all MCCs, closing the loophole for fraud.

There is no timetable as to when a new rule might be announced. The regulators are still working on a new pricing mechanism, a central banker said.