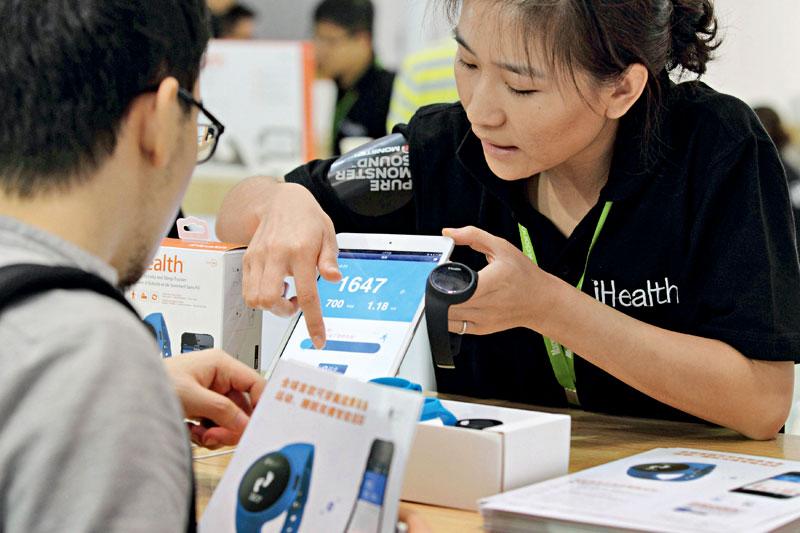 The earliest examples of these gadgets were medical devices like pacemakers and heart stents, but now watches and wristbands than can collect information from the wearer and can connect to the Internet are becoming more common.

The iResearch Consulting Group estimates that some 40 million wearable devices will be sold in the country in 2015 and the market will be worth 11.49 billion yuan, up from 610 million yuan in 2012.

Most people do not need yet another device to tell them how far they have run or how much good sleep they have gotten, said Zhao Jian, CEO of the FunTalk China Holdings Ltd., a telecoms company.

"What they really need to know is what they need to do to keep healthy, so the key here is providing solutions."

Wearable devices sold to end users are only paving the way for companies to offer further services, Zhao said, and this is where the profits are.

Zhao said the makers of wearable devices could sell data collected from users to many different buyers, for example governments, which could use the information to get to grips with health issues, and insurance companies that want to create products for special groups.

Companies will need systems to handle data collection, transmission and processing to also understand what users need and want, Zhao said, and then companies can provide value-added services.

Foreign companies like Samsung have been producing systems for data collection and processing, and Chinese companies are also rolling out similar systems, including Baidu's Dulife and FunTalk's cloud platform.

Baidu executives say its future is in big data and cloud services. A source at the search company said that its strength lies in cloud processing and computing capacity. The company has already amassed a great deal of advanced technology and built mature systems to allow partners access to its massive user base.

A product manager at Xiaomi named Xia Yongfeng explained how this works.

"In simple terms, the more Mi Band users we have, the more data we can collect and the more accurate our calculations will be," Xia said. "Most companies are only at the stage of collecting and enumerating data, never going as far as processing it and creating mature analysis reports."

Because manufacturers see more value in the data wearable devices collect than the hardware itself, the prices of the gadgets have fallen in the past year from thousands of yuan to several hundred yuan.

In July, Xiaomi started selling its Mi Band for 79 yuan, sparking a price war. Two days later, a wristband made by a company called Bong fell from 690 yuan to 99 yuan.

Shan Riqiang, chief technology officer of Neusoft Xikang Healthcare Technology Co. Ltd., an IT service provider in the northeastern city of Shenyang, said wearable products were just an entry point for companies. "The more important thing is the supporting systems."

Neusoft Xikang has built a health management network covering over 4,000 villages in the island province of Hainan and is promoting its models in cities like Chengdu, in the southwest. It is also developing products with several hospitals and establishing health management centers.

And other companies are trying to get into the field, said Liu Mingyu, investment director at ZTE Venture Capital Innovative Fund. The key factors are rolling out intelligent products, establishing comprehensive analysis systems and providing valuable advice to customers.