Coastal Sprawl and a Last Stand for Wetlands 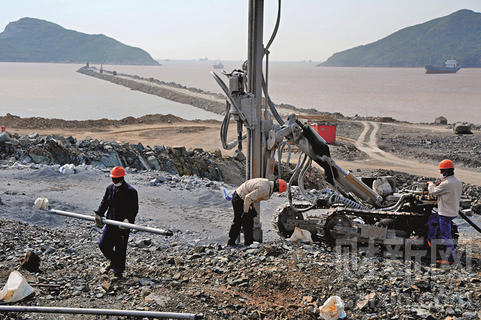 (Beijing) – Sprawling urban and industrial development along China's 18,000 kilometer east coast is a lifeline for the nation's economy but a threat to the region's dwindling wetlands.

And as the wetlands disappear, so do migrating birds. A recent study by the environmental organization Wetlands International blamed industrial development for shrinking the flocks of migratory shorebirds that regularly fly over eastern China. The phenomenon has affected 22 of 25 types of birds studied.

Separately, Chinese and American researchers who recently studied coastal development linked a dramatic decline in global biodiversity and ecosystems to wetland shrinkage in eastern China. Their findings, appearing in the November issue of Science magazine, warned that wetland losses are putting the country's ecological security and sustainable development goals at risk.

The researchers called on the government to better protect wetlands, adding that ecosystems are losing tens of billions of U.S. dollars worth of resources every year due to wetland losses. Already, they said, about half of the nation's wetlands have been destroyed since 1950.

The authors called on the government to better protect wetlands, recommending China adopt a "red line" system that separates areas eligible for development from closed-to-construction preservation zones and writing the protection into law. They also called for setting up a special agency under the State Council to oversee wetland protection and encourage local governments to beef up environmental protection.

Nicholas Murray, a migration biologist at the University of Queensland in Australia, led a team that looked at how quickly shoals have been vanishing along China's 4,000 kilometer Yellow Sea coast. The findings appeared last May in the U.S. journal Frontiers of Ecology and the Environment.

Some 28 percent of the region's shoals were lost between the 1980s and the early 2000s, say Murray and his colleagues, while 65 percent of the shoals that existed in the 1950s are gone.

Environmental experts have also taken a critical look at the thousands of kilometers of seawalls built in recent decades to protect cities and factories along China's coast. About 60 percent of coastal development has been possible thanks to seawalls, which some experts have dubbed the "new great wall." If laid end to end, these seawalls would stretch some 18,000 kilometers.

Some of the world's most important flyways for migrating birds parallel the country's eastern seacoast. The coastal wetlands that dot the region serve as key stopovers where birds can rest and refuel.

Every autumn, for example, huge flocks of birds such as the pointy-beaked pied avocet and kentish plover depart from their summer homes in northern China, Mongolia and Siberia for long journeys to southern locales where they spend winters. Some fly as far as Australia. In spring, the migratory pattern is reversed.

Every November, for example, tens of thousands of migrating birds stop to eat and rest at the Qilihai wetland reserves in Hebei Province's Changli County, about 260 kilometers east of Beijing.

China's coastal regions are home to some 230 kinds of shorebirds, or about one-quarter of the world's total, according to Ma's study. Among those that migrate, Wetlands International says the numbers of birds following coastal flyways have fallen because of hunting, pollution and a declining amount of food sources available on the route.

Ma said shorebirds such as the pied avocet cannot live without wetlands. So there is a direct connection between a wetland's health and the number of birds that stop by in spring and fall while flocks migrate.

China has about 5.8 million hectares of coastal wetlands, which include estuaries, islands, beaches, mangroves, salt flats and reefs. Even though this land area accounts for only 1 percent of the country's total territory, Ma said wetlands provide it with up to US$ 200 billion worth of "ecological services" such as clean water every year. That's about 16 percent of the nation's total ecological services value.

Wetlands also provide valuable habitat for fish. But according to the China Council for International Cooperation on Environment and Development, a unit of the Ministry of Environmental Protection, wetland shrinkage and pollution have damaged fish habitats. A council report estimated that urban and industrial development in wetlands areas cost China more than US$ 31 billion in ecosystem losses every year.

"A wetland is for everyone," said Lei. "It is a gift from nature that should be enjoyed by everyone."

China has taken some steps to protect wetlands, said Lei, although these vital stopovers for birds and blockers of waves are continuing to disappear along the east coast. Those that remain are in poor condition.

In 2000, China formulated an action plan for protecting its wetlands, and announced a blueprint for wetland conservation projects four years later.

It has designated 34 nature reserves in coastal regions, and 14 of them are protected by the Convention on Wetlands of International Importance. However, there has been little enforcement because jurisdictions are unclear.

Authors of the Science article noted that the country plans to pave over another 250,000 hectares of coastal wetlands in several provinces by 2020. That's on top of the estimated 60,000 hectares slated to vanish under a development plan for the 2010-20 period.

The central government requires that developers receive special permission to build on any tract greater than 50 hectares, including wetlands. But local government officials in charge of development can get around this regulation by dividing a project into several pieces, each with less than 50 hectares.

Some local officials have even been known to change the boundaries of wetlands preservation zones so that nothing stops a project, several environmental researchers say.