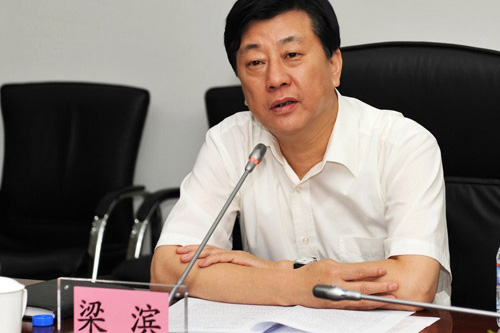 (Beijing) — Liang Bin, a member of the Communist Party's standing committee in Hebei Province and a former deputy governor in neighboring Shanxi Province, is the latest high-profile official caught up in a nationwide corruption probe.

Sources told Caixin that Liang is closely connected to several previously ousted Shanxi officials including Shen Weichen, the former party secretary of the city of Taiyuan, and Bai Yun, a member of the provincial party standing committee. Shen and Bai are among dozens of former Shanxi officials under investigation for graft.

Before vanishing, Liang also served as head of the Hebei provincial organization department. A source said he was the first member of that department to be probed since President Xi Jinping's government launched the corruption crackdown in late 2012.

Liang may have been in the bull's eye since late October, when the Hebei organization office was criticized by a central government inspection team for allegedly breaking rules tied to official appointments. The team found evidence of abuse of power and document falsification.

But apparently it was Liang's past activity in Shanxi, where he spent most of his professional career, that put him on the investigator's radar screen, said the source.

Wei Zhiyuan, Liang's uncle, told Caixin that as a boy Liang was a good student who grew up to be a responsible government official.

Wei remembers he once tried to use his ties to Liang to grease a job application. But the application was rejected. Wei recalls that Liang told him, "For the sake of discipline, I can't interrupt."

Liang's father Liang Zhengheng called his son responsible and "good at communicating with others," and a man with "good social skills."

But non-relatives saw Liang in a different light. A source close to the Shanxi government called him socially adept but not a skilled official. During his years with various government agencies, the source said, Liang's accomplishments were few.

A source said some of Liang's relatives operate land development and construction businesses in Shanxi and Hebei.

Two of Liang's three younger brothers hold government jobs in Shanxi, sources said. Liang Tao is the director of the party's discipline inspection team in Taiyuan, and Liang Jiang has worked for the Taiyuan Postal Bureau and the Shanxi Water Bureau.

The companies share an office in Taiyuan. A staffer told Caixin Liang Bin has nothing to do with the companies. Liang Jiang was not available for comment.

Wu and an accomplice Zhang Guihong are named as co-owners on registration papers for Shanxi Yale, which launched in 2000 with 5 million yuan. The company was renamed as Shanxi Yale Environmental Protection Technology Co. in 2014 and expanded its business from gardening to environmental protection equipment, pollution prevention and land reclamation.

In 1996, the party transferred Liang to the city of Xinzhou for a job as that community's deputy party chief. Two years later, he was promoted to party head.

Liang was named deputy governor of Shanxi in 2003 after about six years in Xinzhou and a stint as party head in the city of Shouzhou. A Chinese Academy of Social Sciences publication said that in Xinzhou, Liang spearheaded construction of a hydropower station and establishments of joint venture with mining concerns Shenhua Group and Luneng Group.

Several sources told Caixin these projects had problems. Luneng's affiliate Luneng Jinbei was charged with dumping pollutants in 2010 and operating a coal mine without a license in 2011. China Power Investment Corp. eventually bought Luneng Jinbei and suspended some of its mines.

In June 2008, Liang was transferred to Hebei from Shanxi for a job as head of the organization unit and member of the provincial party standing committee. He launched reforms of the province's official appointment and management system.

But then the central inspection team arrived, called the system corrupt, and decided that local officials had illegally colluded with urban development and construction companies.