PBOC Hits Back at Criticism of Currency Swap Deal with Russia 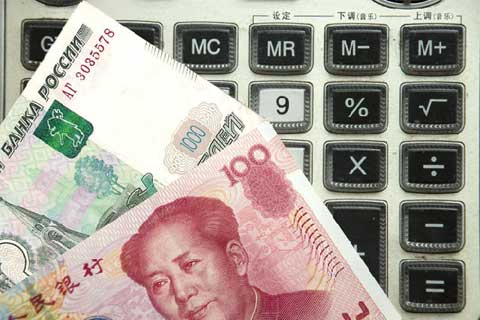 (Beijing) – The recent tumble of Russia's ruble has prompted criticism of a currency swap deal the central bank signed with Russia last year.

The agreement, signed on October 13, says the People's Bank of China (PBOC) can swap 150 billion yuan for 815 billion rubles anytime over the following three years.

As the ruble weakened, critics have called the move foolish and said it amounts to giving money to Russia. The PBOC said this is not how a currency swap deal works.

The bank took to Sina Weibo, China's version of Twitter, on December 19 to explain why it says the arrangement does not put China at a disadvantage. The deal is only a reserve of foreign exchange that both sides could tap into and each transaction must be arranged individually, the Weibo post says.

"We do not face any exchange rate risk because what we send out and receive are all in yuan," the post says. "The amount of capital to be exchanged is calculated by the exchange rate on the day a swap is initiated … and the amount of domestic currency both sides will receive (when the swap matures) is the same as the amount they sent out."

In other words, a currency swap deal is like a credit line a commercial bank gives to its borrowers, a source close to the central bank who is familiar with the operation said. "It gives both sides the right to undertake an exchange of currencies, but how much is exchanged is a different matter," he said.

The interest rate Russia is obliged to pay on the yuan it receives under the arrangement is determined by China's interbank lending interest rates, the central bank said.

There is generally no need to worry about national interests being damaged by fluctuations in exchange and interest rates, Wang Jian, a senior economist at the U.S. Federal Reserve Bank of Dallas, wrote recently in a commentary published in China. He argues that the central bank has been wrongly accused of aiding Russia with the currency swap deal at the expense of its own national interests.

The only risk that could be a legitimate concern with currency swap deals is a counterpart failing to repay borrowed money, Wang said, but a default by a sovereign country is extremely rare. When it does happen, he wrote, the lenders were private companies, not a foreign central bank.

China signed currency swap deals worth some 3 trillion yuan with 28 countries and regions by the end of last year, data from the central bank shows. Traditionally, the swaps are used to help countries overcome short-term liquidity problems with foreign exchange, said Xu Qiyuan, a senior economics researcher at the Chinese Academy of Social Sciences.

This is true, but the Chinese central bank's primary goal with currency swaps is to facilitate and promote cross-border trade and investment, the source close to the PBOC said.

The central bank has said the purpose of the currency swap with Russia is "to facilitate bilateral trade and direct investment."

A researcher at the central bank who declined to be named said the swap deal with Russia could serve as an anchor for the ruble so "it won't be jolted up and down and capsize in the stormy ocean." In this sense, he said, it amounts to a promise of limited aid, from a relatively stable economy to a more volatile one.

This argument has its doubters. Gary Hufbauer, a research fellow at the Peterson Institute for International Economics, said 150 billion yuan is far from enough for Russia to stabilize its currency and economy from the impact of falling oil price and sanctions from Western countries over the Ukraine crisis.

If the figure is quadrupled, he said, it might give Russia some breathing room. But then China will have to face pressure from the United States, which is leading the sanctions, Hufbauer said.

Eswar Prasad, professor of trade and economics at Cornell University, also cast doubt that the currency swap would provide any real boost to Russia's economy. Symbolically, a little support from China is important, he said, but whether it is enough to support the market is a different matter.

Among the world's major economies, only Japan and the United States have not signed currency swap deals with China. Agreements should be worked out, but they have been hindered by political factors beyond the control of central banks, the source close to the PBOC said.

The central bank's researchers and policymakers have said currency swaps are a means to achieve the goal of yuan internationalization. Sun Guofeng, deputy director of the regulator's monetary policy department, wrote in December that encouraging foreign authorities to use the yuan under the swap arrangement should be part of a strategy toward making the yuan a global currency. The commentary was first published by Comparative Studies, a Chinese-language sister publication of Caixin Online.

This is because most of the countries that swapped currencies with the Fed are mature, developed market economies, whereas many that dealt with China have underdeveloped capital markets and do not have too much transparency in their forex maneuvers, the source close to the central bank said.

The PBOC has done all it can to manage the risks associated with currency swaps, he said. In the unlikely worst-case scenario where Russia cannot repay the yuan it has borrowed, the regulator could sell the rubles it holds to minimize the loss, he said.