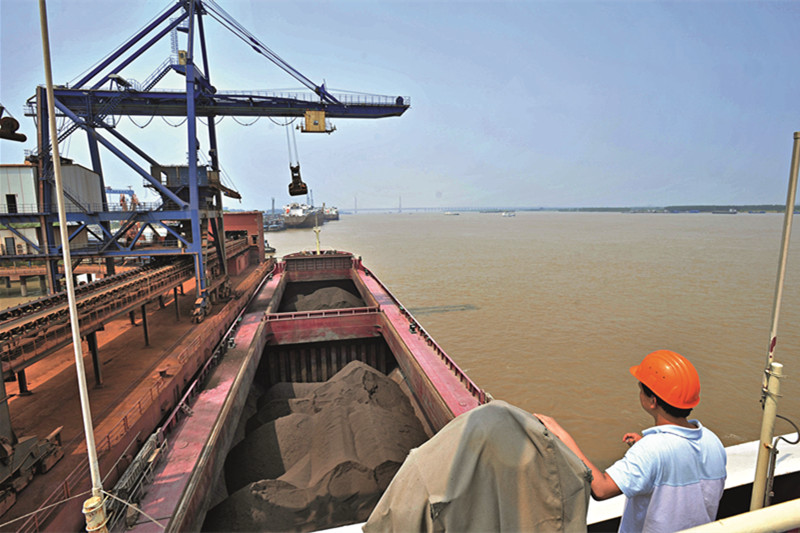 (Beijing) – A Chinese steelmaker digging for its own iron to save money may have hit a rock by investing heavily in overseas mines.

Wuhan Iron & Steel (Group) Corp. (WISCO), a state-owned and Shanghai-listed conglomerate that's also one of China's largest steel producers, is grappling with the consequences of financial trouble at Brazilian and Canadian mines in which it invested.

WISCO controlled up to 20 percent of MMX Mineracao & Metalicos SA, which owns iron ore mines in Brazil and Chile but recently went bankrupt. It's also a business partner with U.S. mining company Cliffs Natural Resources Inc., operator of the Bloom Lake mine in Quebec, which in January suspended production.

Analysts blame the trouble at these mines on slumping global prices for iron ore, a key ingredient in steel manufacturing. Prices have fallen over the past year in the face of ever-expanding production at mines run by the world's largest iron ore suppliers – Vale SA, Rio Tinto Group, BHP Billiton Ltd. and Fortescue Metals Group. As big miners drove down prices, analysts say, smaller companies found it increasingly difficult to compete.

WISCO has declined to comment about the plight of MMX and Bloom Lake mine in which it invested a combined US$ 640 million six years ago. The company also has stakes in four iron ore mines in Canada, as well as one mine in Australia and one in Liberia.

MMX said the bankruptcy was due to its economic and financial situation, while Cliffs said it was forced to shutter Bloom Lake in January because production costs far exceeded market prices.

The global average price for 62 percent grade ore peaked last year at US$ 134.50 a ton before skidding dramatically, according to the Platts Iron Ore Index, a benchmark for the spot price of physical iron ore. It had fallen to around US$ 60 a ton in January.

The decline in ore prices was totally unexpected, Li said, so WISCO's management cannot be faulted for pursuing its overseas investment plan. The same "going out" strategy centered on buying foreign assets and doing business abroad has been followed in recent years by a variety of Chinese state-owned companies, he said.

Unless ore prices rebound, WISCO will not benefit as expected from these mine investments. On January 9, in a move highlighting hopes for a turnaround, the company formed a resources company to take charge of managing overseas mines. But in the short run, the steelmaker finds itself powerless to rescue these foreign investments.

WISCO paid US$ 400 million in 2009 for its stake in MMX to become the miner's second-largest shareholder. The largest is Brazil's EBX Group.

That same year, WISCO paid US$ 240 million for about a 20 percent stake in the Bloom Lake mine by investing in a Canadian company that was a few years later taken over by Cliffs.

Fueling the steelmaker's overseas shopping spree was a desire to cut its reliance on iron ore extracted by the world's major mining conglomerates. In 2011, a good year for its overseas mines, WISCO President Deng Qilin predicted that within five years the mines would be so productive that his company would never have to buy iron ore again.

The government has seen overseas investments by WISCO and other domestic steelmakers as market decisions, and that all of these activities should follow rules of the market, said a government official.

Three mines under the MMX umbrella – Sudeste and Corumba in Brazil, and Minera in Chile – have combined proven reserves of about 3 billion tons. Up to 10.7 million tons of this can be extracted every year. The company also controls a seaport through which ore can be shipped to China quickly and conveniently.

The investment's initial payoff came in August 2010, when the first shipload of ore from MMX mines – 162,000 tons – arrived at the port of Ningbo. The ore was then hauled to WISCO's manufacturing plants.

The Bloom Lake mine, which has proven reserves of 1 billion tons of ore, started producing 8 million tons annually in 2010. A second phase of the mine project, which officials said would increase total output to 13.5 million tons a year, is still on the drawing board, awaiting the cash needed to prepare the area before digging can begin.

The expansion has yet to get off the ground because Cliffs is still looking for investors to finance the construction work needed to begin the second phase.

But last year's collapse of ore prices threw cold water on the expansion plan, said Cliffs officials, freezing out investors. Moreover, Bloom Lake is no longer a cost-effective mine.

Extracting a ton of iron ore at Bloom Lake today costs about US$ 120, Cliffs said, and about twice what a ton of ore is worth on the market today.

The extraction price was likely to fall to US$ 40.70 a ton after the second phase of expansion, according to a 2009 report from the investment bank Merrill Lynch. Nevertheless, the mine and expansion plans were idled indefinitely in January.

Meanwhile, MMX's bankruptcy has put WISCO South American investments at risk, said an employee for the steelmaker who spoke with Caixin on condition of anonymity. It was unclear how much the Chinese investor stands to lose, the employee said, and it was highly doubtful that buyers could be found for MMX's idled mines.

According to a senior analyst at the trade data website United Steel Net, Zhang Jiabin, MMX spends US$ 70 to extract a ton of iron ore from the Corumba mine. He said the company may have suspended production at the mine with a view to later selling it.

WISCO apparently had no say in MMX's decision to stop production at Sudeste, Corumba and Minera a few months before declaring bankruptcy in August. But the steelmakers' involvement had started waning in 2012, said the employee, when WISCO stopped financially supporting MMX in order to focus on projects in Canada and a new factory in Fangchenggang, in the southern Chinese region of Guangxi.

WISCO's stake in MMX was diluted in 2012, when the Brazilian company invited additional investors, said the employee. The Chinese company bowed out of MMX management decisions that year.

MMX's woes also may be linked to troubles at EBX, which has oil, energy, logistics and mining subsidiaries. The company's oil subsidiary fell into financial trouble in 2013, the same year MMX started planning to suspend ore production at Corumba in order to cut costs.