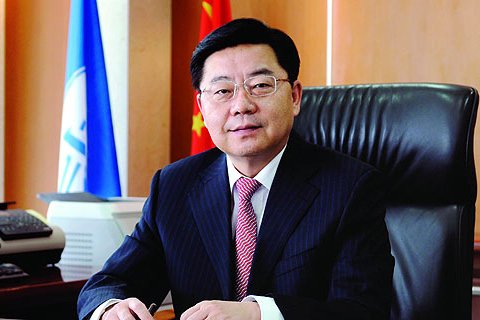 (Beijing) – Two men who were attending the annual session of the National People's Congress in the capital were detained amid corruption probes right after the legislative meeting ended on March 15.

Less than an hour after the NPC closed with a press conference held by Premier Li Keqiang, the Central Commission for Discipline Inspection (CCDI) said on its website that Qiu He, the deputy Communist Party head of Yunnan Province and a member of the legislature, had become the subject of an inquiry into "serious discipline and law violations."

That is the preferred phrase for corruption used by the party's top anti-corruption watchdog.

Qiu was detained after attending the closing ceremony of this year's NPC meeting and returning to the downtown Beijing hotel where he and other deputies from Yunnan were staying, a source close to the situation said.

The inquiry is related to land deals and building projects in Kunming, the capital of the southwestern province, sources with knowledge of the investigation said.

Some of the Yunnan deputies expressed surprise that Qiu was taken away, but others said there have been rumors he was in trouble since late February.

Qiu, 58, was named deputy party secretary of the province in November 2011. He was the party boss of Kunming from December 2007 to December 2011. Before that he spent most of his career in the eastern province of Jiangsu, rising to deputy governor. He is also an alternate to the Central Committee, the party's nexus of national power.

Qiu gained a measure of renown for the policies he put in place in Jiangsu and Yunnan, including an order to publish all local officials' phone numbers in a bid to improve transparency, and measures to introduce outside investment and encourage the privatization of education and medical institutions.

In a separate statement shortly after Qiu's detention, the CCDI said Xu Jianyi, the chairman of state-owned First Automobile Works Group Corp. (FAW), a partner of Toyota Motor and Volkswagen AG, had also become the subject of a graft inquiry.

Xu was arrested at his hotel after he returned from the NPC meeting, a source close to the matter said. Xu was a member of the delegation from the northeastern province of Jilin.

He becomes the second top executive of a central government-owned enterprise to be investigated since the party held its 18th National Congress in late 2012, a major event that formally gave the leadership of the party to Xi Jinping. Song Lin, the former chairman of China Resources Group, was detained in April 2014.

Centrally owned state enterprises will become major targets of the corruption crackdown that started with Xi's rise to power, a separate source close to the investigation into Xu said. The central government has sent 13 special teams to 26 companies to check their operations and management.

Xu, 62, has spent 36 years at FAW and has headed the company since 2007. His career in the auto industry was interrupted from November 2003 to December 2012 when he was named mayor of Jilin City and later vice governor of Jilin Province.

Since Xu took the helm of FAW in December 2007, the company has seen sound business growth and pushed forward a shareholding reform to prepare for a long-awaited public listing.

However, it has also been criticized for its opaque operations regarding dealerships and relations with suppliers.

"Since then, Xu has rarely made a public appearance," a source close to FAW said.

It is unclear why Xu is being investigated, but the source said that "there are so many aspects of the company's business that could have problems."

In late January, the CCDI published a statement criticizing FAW for spending millions of yuan to buy land and build villas in Changchun, the city where it has its headquarters.

The CDIC's notice also said that FAW Group executives were found to be engaging in corrupt practices in the sales sector. Company leaders illegally owned or held shares in dealerships, and some helped relatives do business with the automaker. A company that wanted to open a dealership had to pay an FAW executive a bribe of 2 million yuan, a person with knowledge of the matter said.

Established in 1953, FAW is one of China's largest auto manufacturers. It has nearly 50 subsidiaries, including five listed arms. In 2013, it reported revenue of 450 billion yuan.