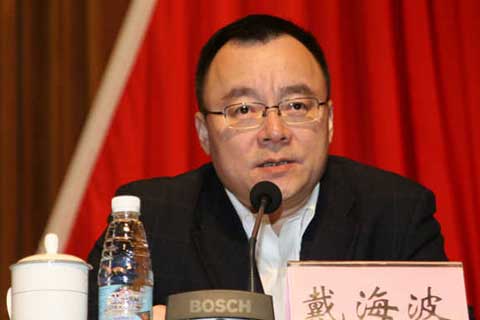 (Beijing) – A senior official in the Shanghai government who oversaw the opening of the city's pilot free trade zone has been placed under investigation by the Communist Party's graft buster.

Dai Haibo, deputy party secretary of the city government and former deputy chief of the Shanghai free trade zone, is being investigated for "serious discipline and law violations," the Central Commission for Discipline Inspection said on its website on March 17. The phase is usually taken to mean corruption.

Dai was named the deputy director and party secretary of the Shanghai FTZ on September 30, 2013, one day after the inauguration of the 29 square kilometer zone, a testing ground for China's many reform measures. In December, the zone was expanded to 121 square kilometers.

Dai has participated in many details of the FTZ's operations, an official in the Shanghai government who asked not to be named said. "No one is clearer about the FTZ's experiences and needs than him," the official said.

Dai was removed from his posts in the FTZ in September, prompting speculation he was in trouble.

The city's deputy mayor, Ai Baojun, said at a September 26 press conference for the anniversary of the FTZ that Dai's departure was a routine personnel reshuffle. Ai also said Dai was helping him on more general tasks, such drafting a five-year plan for Shanghai.

Dai's ex-wife has told city officials many times that he is corrupt and has behaved immorally, sources close to the inquiry said. No serious violations were found in probes that came about because of her reports, except one that Dai owned a number of properties, one source said.

Her complaints hurt Dai's career, one of the sources said. "Considering his capacity and experience, he should have risen as high as a deputy mayor."

Dai was born in 1962 in the eastern province of Jiangsu and graduated from Shanghai Jiao Tong University, where he was involved in the Communist Youth League.

In 1993, he became deputy party secretary of the Shanghai branch of the league, which acts as a reservoir of young officials. Two years later, he was transferred to the city's Pudong District to serve as chief of its Social Development Bureau.

After a two-year break as a visiting scholar at the University of Columbia in New York, Dai was named general manager of the Shanghai government-backed Zhangjiang Hi-Tech Park and chairman of its listed subsidiary.

In 2003, Dai returned to the city government, rising to deputy secretary in February 2013.