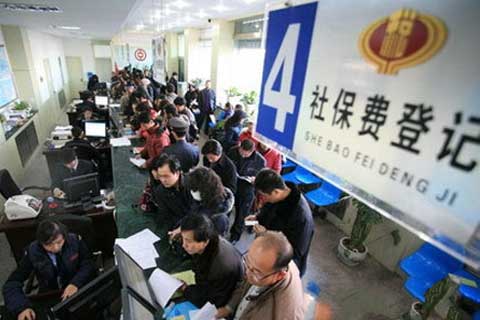 (Beijing) – The State Council published a detailed plan for an "occupational annuity program" for civil servants and employees in the public sector on April 6, the latest move by the government to reform the pension system.

The cabinet said the annuity program is compulsory, and government agencies and public institutions such as schools and hospitals and their employees must contribute to the annuity fund.

On January 14, the State Council announced plans for a new pension scheme for civil servants and those in the private sector. That plan said an annuity program should be introduced to provide retirees with another monthly payment.

Civil servants and workers in the public sector were asked to contribute to the pension fund like people in the private sector starting in October last year, and they will get pension payments according to their contributions.

The reform was carried out due to growing public discontent over inequality in the pension system. Civil servants and those in the public sector do not contribute to the fund, but get much higher pension payments than others when they retire.

The central government also notified government agencies and public institutions of detailed plans for salary increases in January, raising the base salaries of civil servants and public workers by at least 60 percent as part of the change.

What is the occupational annuity and why is it needed?

The occupational annuity is separate and complementary to the pension scheme. The program, along with the pension scheme, will ensure government employees and workers in the public sector enjoy the same level of benefits after the reform as they did before, said Hu Jiye, a professor at the Center for Law and Economics at the China University of Political Science and Law in Beijing. That assurance will help the reform progress smoothly, Hu said.

How much will employers and their employees contribute to the annuity fund?

How many people are covered by the program?

Data from the State Administration of Civil Service show that China had nearly 7.2 million civil servants and more than 31.5 million public-sector workers employed by institutions such as schools and hospitals at the end of 2013.

How much extra will the government spend by supporting the program?

Government agencies, public institutions and their employees will have to pay 76.6 billion yuan to the annuity fund every year, and the government will cover most of that, Ping An Securities estimates. The calculation is based on an estimate that around 70 percent of civil servants and public workers will join the program and their average salary is 3,000 yuan per month.

What was China's pension system like before the reform?

The country introduced a pension scheme for workers in the private sector in the 1990s. Under the plan, employers and workers had to contribute 28 percent of employees' salaries to the pension fund.

Workers in the private sector got only 30 percent to 60 percent of their previous salaries after retiring. In 2011, workers got an average 18,100 yuan a year.

Civil servants and other public-sector workers were not required to pay into the fund, but received pension benefits from the state after retiring.

Civil servants and workers in public institutions could get up to 90 percent of their old salaries starting when they retired. These workers got an average of 26,100 yuan in 2011.