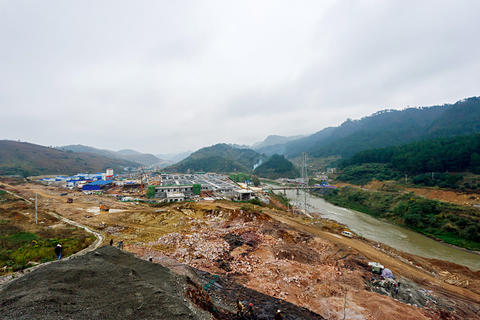 (Beijing) – A highly anticipated model that would see partnerships between public and private investors set up to get infrastructure projects built has fallen far short of expectations in practice.

Since the third plenum of the Communist Party's 18th Central Committee in late 2013 called for more private involvement in infrastructure building and public utility projects, the model, called public-private partnership (PPP), has created a buzz in China because Beijing wants to rely more on it to boost infrastructure investment.

The PPP model has been used by the Chinese government in the past, but in recent years has gotten more attention. By inviting private investors to participate in government-backed infrastructure projects, the PPP model coincides with Beijing's reform vows to increase the power of the market and the private sector, while scaling back government decisions over resource allocation.

Government agencies have promoted the model. A series of policies and regulations have been issued by the Ministry of Finance and the National Development and Reform Commission (NDRC) to build up a framework for PPP operations.

But despite the government's enthusiasm, private investors have remained lukewarm to the idea.

In December, the finance ministry announced 30 PPP projects. However, sources close to the ministry said that so far only three are been in place: a sewage system in Chizhou, Anhui Province; a pollution control effort in Guiyang, Guizhou Province; and a wastewater processing plant in Hunan Province.

Local governments have also been pushing their own PPP deals. More than 10 provinces, including Jiangsu, Anhui, Zhejiang and Sichuan, have launched pilot programs. The eastern province of Jiangsu announced 15 PPP pilot programs in August, but sources close to the government said only three of them had signed contracts in place.

A policy researcher close to the NDRC, China's top economic planner, said that without proper legal protection of private companies' long-term interests in PPP projects and a clarification of supervision responsibilities, firms will hesitate to take part.

"The so-called PPP model is similar to the government's previous practice of encouraging private capital to enter certain areas," the researcher said. "It is just the same wine in a new bottle."

But the government is still trying to push use of the PPP model. In early April, the NDRC and finance ministry partnered with the Ministry of Water Resources to issue guidelines for a mechanism to encourage private involvement in major water projects. The NDRC also joined hands with the China Development Bank (CDB) to promise financial support to PPP projects.

A CDB official said the model requires supporting policies such as for local government bidding arrangements and price management mechanisms. He predicted that the projects will gain momentum in the second half of this year and see large-scale growth in 2016.

No national statistics on the progress of PPP projects is available, but local governments have provided some information. An official from Jiangsu's finance bureau said that no nationwide PPP reporting mechanism for comprehensive data on such projects across the country is in place.

The CDB official said the slow progress over the last year is mainly due to the lack of clear pricing systems guiding government payments to private investors. "Moreover, amid the deepening anti-corruption campaign, officials are also worried improper pricing may trigger suspicion," the official said.

Most of the projects that have been launched have undergone years of study, even before the central government got behind the PPP model. A Jiangsu pilot for an elderly care project recently launched by a city government and a subsidiary of tech conglomerate Lenovo Group entered negotiations three years ago. The project was selected by the provincial government last year as a PPP pilot after changes were made to the original plan.

Jin Yongxiang, general manager of Dayue Consulting Co. in Beijing, said PPP projects usually last for a long period and have complicated operations, so they need more time for research and preparation.

The finance ministry is planning to launch a batch of pilot projects whose operations can be copied nationwide, while many local governments are working on detailed guidelines and local supporting policies. The official in the Jiangsu government said the province will set up a special fund to offer subsidies for PPP projects.

But some officials are staying on the sidelines. An official in one coastal city said his government has not issued any policies related to the PPP model. Local governments still need to see the advantage of the model and whether it is affordable before getting involved, he said.

The definition of PPP in China is much broader than that used abroad. Regulations used by the finance ministry say private investors can actually be state-owned companies as long as they are not controlled by the local government.

Documents that have been released on current PPP projects indicate that local government companies and central state-owned enterprises (SOEs) are the main players, whereas non-state, private investors are playing a small role.

"Those in the game have already been involved in previous PPP projects, but those who haven't participated before are staying on the sidelines," said the manager of a company involved in a PPP project.

Li Jingyi, deputy managing director of infrastructure consultancy Shanghai Jumbo Consulting Co., said SOEs, especially the ones overseen at the central level, are more active in seeking out projects. Compared to their previous focus on construction, they are now expanding further in the industry chain to get involved in investment and operations.

Government documents show that two of the three PPP pilot projects announced by the Ministry of Finance that have started works have state companies as partners.

Local government financing platforms, which are at the center of Beijing's order to reshuffle debts, are also active players in the PPP approach in the hopes of accomplishing a business transformation.

The official in the Jiangsu government said that his province is encouraging city governments' investment vehicles to participate in PPP projects elsewhere in Jiangsu.

While SOEs are showing interest in the model, private investors are still hesitant to take part. This is partly because in previous operations, some local governments changed policies midstream, hurting the interests of private investors, said Guan Qingyou, the research head of Minsheng Securities.

Banks are also lukewarm in their interest, and they are the main source of capital for PPP projects. A source from China Construction Bank said banks are being quite cautious about lending because some project have just been repackaged from old plans by local financing platforms.

An official from the Jiangsu branch of Industrial and Commercial Bank of China said banks are waiting to see the final results of a survey the finance ministry is doing on local government debt levels.

The officials said banks are likely to closely scrutinize PPP projects in a bid to control risk.

In October, the ministry required all local governments to review their debts and report back by January 5. The ministry has not published any of the reports it received. It said on January 29 that some contained mistakes and inflated figures, and it wanted new reports by March 8.

A source from the Bank of China said banks are going to prefer government-backed projects because their ability to repay is, to some extent, endorsed by the government.

Sun Xiaoxia, director of the ministry's finance department, said at a meeting in March that PPP projects are mainly attractive to banks for their government background. Sun urged banks to change their mindset of relying on government endorsement to control risk.

In mid-March, the NDRC and CDB announced they will develop credit policies for PPP projects that included preferential loan terms and faster processing. The projects will also be allowed to use their operating license, emissions quotas or other licenses as collateral for loans.

The CDB officials said the bank would take into account local governments' financial situations and outlook, and the national auditor's report on debt situations when evaluating projects.

For their part, trust companies see PPP projects as a business opportunity. Li said hurdles for trust companies include their relatively high costs of capital and shorter return periods.

More diversified capital sources are also expected to offer financing to PPP projects in the future. Jin, of Dayue Consulting, said one possible source of money would be industrial funds, which can provide a platform to introduce capital from insurance companies, pension funds and other long-term investors.

However, many experts warn that more attention should be paid to the management of PPP projects. Zeng Xiaoan, director of the economic construction department at the finance ministry, wrote in a recent article that while the model offers a solution for local government to tackle their debt problem, a lack of supervision may create huge new debts.